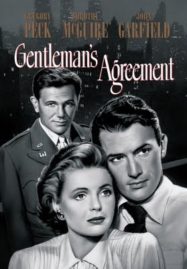 When Darryl Zanuck was considering making Laura Z. Hobson’s 1947 best-seller about “genteel” anti-Semitism, Gentleman’s Agreement, he faced a common dilemma: At the time, there were significant number of powerful Jews in Hollywood.

As studio heads, they were reluctant to plead for Jewish causes. They even avoided the topic of what had happened with the genocide of European Jews, before, during, and just after the war. Serious social issues were generally avoided because they weren’t good box office business. In tough times, especially, audiences wanted an escape.

Zanuck wasn’t Jewish, but he found the book compelling. Though it was thought-provoking, it managed to avoid making readers too uncomfortable. Coming out right on the heels of the book, the film also managed to straddle entertainment and enlightenment.

In an in-depth 2017 article on the film, the year in which it celebrated its 70th anniversary, Saul Austerlitz wrote, “it was a strange mix of daring and cowardice.”

The story’s hook: a journalist passes as a Jew

The story centers around Philip Schuyler Green, a journalist who is assigned to do a series of articles on anti-Semitism. The hook is that he will “pass” as a Jew to get an inside look at the bias that was rampant in the upper echelons of society. It was a time when Jews were barred from certain neighborhoods, towns, clubs, and schools.

Despite the fairly light touch with which anti-Semitism was treated in Gentleman’s Agreement (being that it was produced in the wake of the murder of 6 million Jews), it was considered quite progressive for its time. It’s easy to forget that, now that there are virtually no limits to what films can explore now.

Here’s a view from 1947, the year in which the film came out (and it bears mentioning that it won a number of academy awards; see When Gentleman’s Agreement made Oscar History)”

There has always been a gentleman’s agreement in Hollywood never to make a picture with the subject matter of Gentleman’s Agreement. That particular subject matter is anti-Semitism — in other words, hatred of Jews.

Some of the movie industry’s biggest operators are Jews. They have feared that any movie dealing with anti-Semitism might have as a weapon against discrimination would be nullified by a charge that it was only Jewish propaganda. These businessman also believed that making pictures about any controversial subject just isn’t good business. 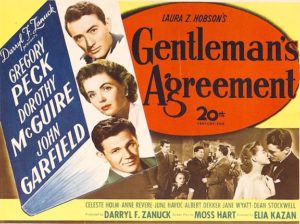 A bestselling book goes to Hollywood

Then Laura Z. Hobson wrote a book called Gentleman’s Agreement. It concerns a magazine writer, assigned to do a series of articles on anti-Semitism. who poses as a Jew in order to feel the full effect of discrimination on the lives of a family belonging to a minority group.

Before the book was published, 20th Century Fox’s top producer, Darryl Zanuck, read the galley proofs. He liked the idea of making it into a movie. When the book gained while acceptance, Zanuck was convinced.

“Serious movies up to now have almost invariably been box office failures,” says Zanuck. “Movie producers were understandably afraid of them … When I read Gentleman’s Agreement I knew I had to take another chance. This was a way to reply to all the attacks on Hollywood — that we put too much emphasis on the frivolous side of life. This was a way to show that we can tell a serious story without being dull.”

“I was astonished, however, when told I was ‘courageous’ for making this movie. It just looked to me like it would be a terrific show,” Zanuck concluded.

Gentleman’s Agreement does have a wallop — an impact that is not solely dependent on its theme. Its stars — Gregory Peck, Dorothy McGuire, and John Garfield — are enough to guarantee an audience. Brilliant direction and writing are sure to maintain interest.

When politico-businessman Eric Johnston signed on as the industry’s number one front man, he expounded on the idea that movies can teach as well as entertain. Movies, he said, are the greatest medium of mass enlightenment ever conceived.

To those critics who cried, “But we’re in business to entertain, not enlighten,” Johnston answered “All right, let’s do both.” The result has been the most significant change in movies since establishment of the morals code, and Gentleman’s Agreement is a prime example of how a film can be entertaining and enlightening at the same time. 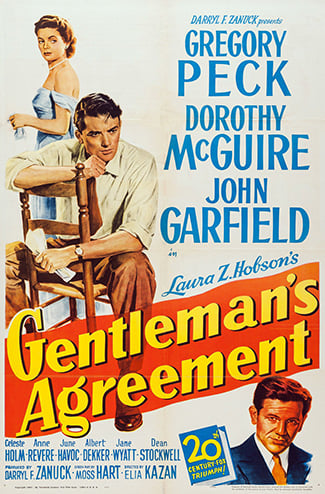