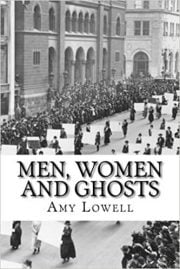 “Patterns,” a poem by American imagist poet Amy Lowell (1874 – 1925, was published in Men, Women and Ghosts (1919). It exemplifies the imagery-dense free verse for which she was known.

Though Men, Women and Ghosts  is a book of poems, Lowell begins her preface by writing that “This is a book of stories.” She goes on to say:

“For that reason I have excluded all purely lyrical poems. But the word ‘stories’ has been stretched to its fullest application. It includes both narrative poems, properly so called; tales divided into scenes; and a few pieces of less obvious storytelling import in which one might say that the dramatis personae are air, clouds, trees, houses, streets, and such like things.

It has long been a favorite idea of mine that the rhythms of vers libre have not been sufficiently plumbed, that there is in them a power of variation which has never yet been brought to the light of experiment.”

Read more of what Amy Lowell had to say about her vers libre poetry. 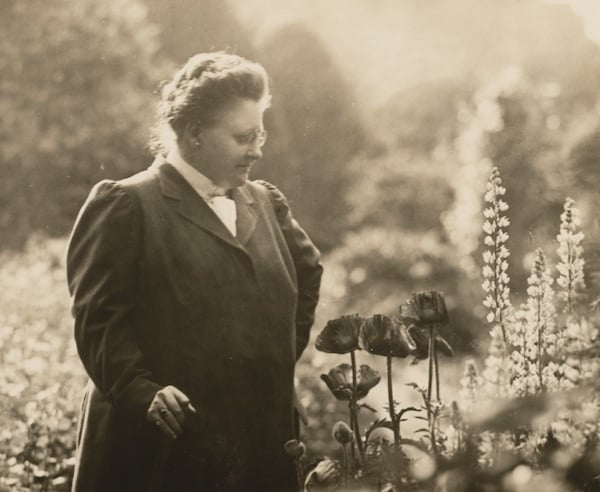 My dress is richly figured,
And the train
Makes a pink and silver stain
On the gravel, and the thrift
Of the borders.
Just a plate of current fashion,
Tripping by in high-heeled, ribboned shoes.
Not a softness anywhere about me,
Only whale-bone and brocade.

And I sink on a seat in the shade
Of a lime tree. For my passion
Wars against the stiff brocade.
The daffodils and squills
Flutter in the breeze
As they please.
And I weep;
For the lime tree is in blossom
And one small flower has dropped upon my bosom.

And the plashing of waterdrops
In the marble fountain
Comes down the garden paths.
The dripping never stops.
Underneath my stiffened gown
Is the softness of a woman bathing in a marble basin,
A basin in the midst of hedges grown
So thick, she cannot see her lover hiding,
But she guesses he is near,
And the sliding of the water
Seems the stroking of a dear
Hand upon her.
What is Summer in a fine brocaded gown!
I should like to see it lying in a heap upon the ground.
All the pink and silver crumpled up on the ground.

I would be the pink and silver as I ran along the paths,
And he would stumble after
Bewildered by my laughter.
I should see the sun flashing from his sword hilt and the buckles on his shoes.
I would choose
To lead him in a maze along the patterned paths,
A bright and laughing maze for my heavy-booted lover,
Till he caught me in the shade,
And the buttons of his waistcoat bruised my body as he clasped me,
Aching, melting, unafraid.
With the shadows of the leaves and the sundrops,
And the plopping of the waterdrops,
All about us in the open afternoon—
I am very like to swoon
With the weight of this brocade,
For the sun sifts through the shade.

Underneath the fallen blossom
In my bosom,
Is a letter I have hid.
It was brought to me this morning by a rider from the Duke.
“Madam, we regret to inform you that Lord Hartwell

Died in action Thursday sen’night.”
As I read it in the white, morning sunlight,
The letters squirmed like snakes.
“Any answer, Madam,” said my footman.
“No,” I told him.
“See that the messenger takes some refreshment.
No, no answer.”
And I walked into the garden,
Up and down the patterned paths,
In my stiff, correct brocade.
The blue and yellow flowers stood up proudly in the sun,
Each one.
I stood upright too,
Held rigid to the pattern
By the stiffness of my gown.
Up and down I walked,
Up and down.

In a month he would have been my husband.
In a month, here, underneath this lime,
We would have broke the pattern.
He for me, and I for him,
He as Colonel, I as Lady,
On this shady seat.
He had a whim
That sunlight carried blessing.

And I answered, “It shall be as you have said.”
Now he is dead.

In Summer and in Winter I shall walk
Up and down
The patterned garden paths
In my stiff, brocaded gown.
The squills and daffodils
Will give place to pillared roses, and to asters, and to snow.
I shall go
Up and down,
In my gown.
Gorgeously arrayed,
Boned and stayed.
And the softness of my body will be guarded from embrace
By each button, hook, and lace.
For the man who should loose me is dead,
Fighting with the Duke in Flanders,
In a pattern called a war.
Christ! What are patterns for?