Yonnondio: From the Thirties by Tillie Olsen 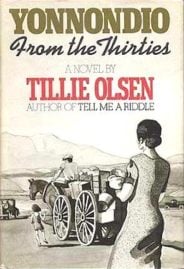 Yonnondio: From the Thirties is a fragment of a novel that Tillie Olsen (best known for Tell Me a Riddle) began at age nineteen, in the 1930s, and then abandoned for decades as she worked to earn a living and raised four daughters.

In 1974, it was published as an unfinished work. It’s the story of the Holbrooks, a struggling working-class family, moving about the western and middle western U.S. in search of a living.

This novel is considered experimental and somewhat autobiographical, and explores themes of class and family (specifically motherhood). It also nods to the socialist views of Olsen and her family of origin.

Here are two reviews taking the long view of the work, from when it appeared in 1974. The title, Yonnondio, means lament for the lost, and was the title of a poem by Walt Whitman.

From the original review by Robert J. Nelson in The Lincoln Evening Journal, March 1974: Yonnondio is moving and often powerful, but rough-edged and fragmentary. Its incompleteness should be no surprise, though.

It was begun in 1932 when the author was 19. One chapter appeared in the Partisan Review in 1934. But the novel it was to have become was never finished.

The author found parts of the manuscript which she had long thought lost. A deliberate search turned up more pieces. After picking and choosing among drafts, assembling and reassembling, the author — in what she calls an “arduous partnership” with the long-ago young writer she had been — brought forth Yonnondio in its present form.

Nebraska-born Tillie Olsen is a kind of literary Roman candle, flaring with occasional brilliance across the landscape of letters. Her output has not been large, but her writing was interrupted for years by the necessities of holding jobs and rearing a family. 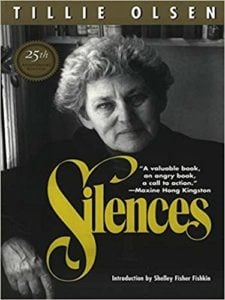 A life of letters despite lack of education

She has shown up from time to time in the better magazines, O. Henry collections, and anthologies. Her other book, Tell Me a Riddle, won critical acclaim.

Some measure of her small but elevated spot in American letters can be gained from the fact that, though “public libraries were her college,” she has taught at Amherst and Stanford, has been a fellow of the Radcliffe Institute, a writer in residence at MIT, and was supported by the respected MacDowell Colony in New Hampshire while she put the pieces of Yonnondio back together.

Depictions of a beleaguered family

The pieces are not many. They tell of a beleaguered family of the 1920s and 1930s, moving from the coal mines of Wyoming to a South Dakota farm to an industrial city with its packing houses (Omaha, perhaps, where part of Yonnondio was written 40 years ago?) in pursuit of bare existence.

It’s a compelling account of poverty and pain and the human spirit’s stubborn survival. One assumes Tillie Olsen lied at least part of what she wrote. It was a life not conducive to creativity. That may be one of the tragedies of those hard times almost a half-century ago. How many Yonnondios went unfinished, or unwritten?

But all those who lived through that epoch salvaged something. In Yonnondio, two-thirds of her life later, Olsen has salvaged more than most, and enriched us all. 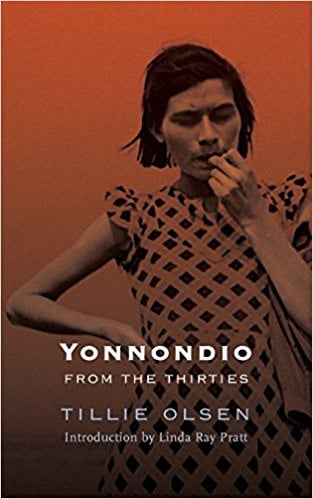 Yonnondio by Tillie Olsen on Amazon

Review #2: Reclaimed fragments from long ago

From the original review in the Somerset Daily American, April, 1974: Begun in 1932 when the author was 19, Yonnondio was set aside after a few years and not worked on again until Tillie Olsen found portions of the old manuscripts and tried to reclaim it.

The reclamation was not entirely successful since, as Miss Olsen admits in an afterword, “It was not to have ended here, but it is nearly 40 years since this book had to be set aside, never to come to completion.” What does appear is a large fragment of what could have been an extremely powerful, moving novel.

A family struggles to survive

Set in the 1920s, the story tells of the Holbrook family, struggling to survive both as individuals and as a family unit on the poverty-level income the father earns as a coal miner.

Determined to have a better life for their children, Jim and Anna Holbrook manage through great self-denial to set aside a small sum of money that enables them to leave the mining town and set up as tenant farmers. After a brief period of happiness on the farm, this life slips from the Holbrooks when the father cannot pay his debts to the bank and they have to leave the farm.

Ending on a note of hope after much struggle

Next stop is the slum of a large city and a job for the father in the slaughterhouse of a stockyard. The parents continue to struggle, the children continue to grow, and the book ends on a small note of hope.

What would have happened to the Holbrooks only Miss Olsen knows, inviting speculation that is interesting but pointless. What Miss Olsen has told, however, is fascinating and beautifully written.

The author is most skillful at setting a mood and fleshing out a character, and her dialogue rings true throughout. This book is worth reading not only for what is is but what might have been.

More on Yonnondio: From the Thirties by Tillie Olsen