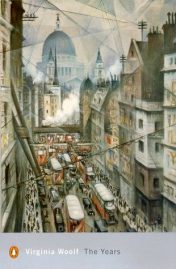 The Years by Virginia Woolf (1937) was the last novel she had published in her lifetime. Spanning some fifty years, it covers the trajectory of the respectable Pargiter family from the 1880s to the 1930s.

One of its overarching themes is the passage of time, and it does so by detailing small, mostly private moments of the characters lives. Still, it moves away from the stream of consciousness style that she’s best known for, and into a more traditional narrative.

The novel is less internal than most of Virginia Woolf’s books, and traces the lives of the Pargiter family and the dailyness of their existence. From the Penguin Modern Classics edition:

“The most popular of Virginia Woolf’s novels during her lifetime, The Years is a savage indictment of British society at the turn of the century, edited with an introduction and notes by Jeri Johnson in Penguin Modern Classics.

The Years is the story of three generations of the Pargiter family — their intimacies and estrangements, anxieties and triumphs — mapped out against the bustling rhythms of London’s streets during the first decades of the twentieth century.

Growing up in a typically Victorian household, the Pargiter children must learn to find their footing in an alternative world, where the rules of etiquette have shifted from the drawing-room to the air-raid shelter.

A work of fluid and dazzling lucidity, The Years eschews a simple line of development in favour of a varied and constantly changing style, emphasizes the radical discontinuity of personal experiences and historical events.

Virginia Woolf’s penultimate novel celebrates the resilience of the individual self and, in her dazzlingly fluid and distinctive voice, she confidently paints a broad canvas across time, generation and class.” 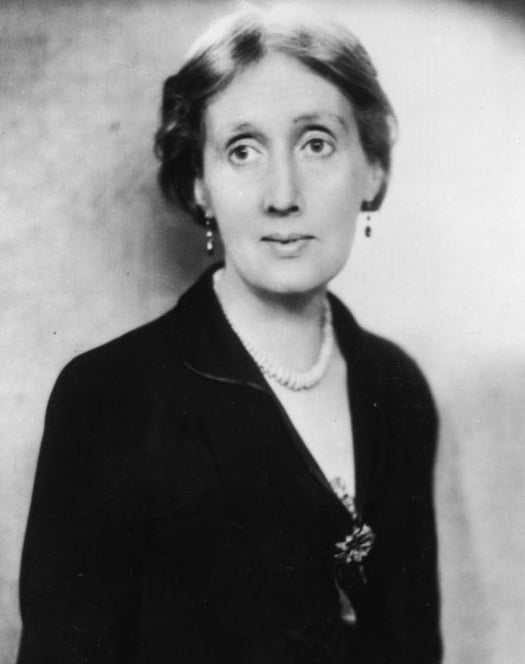 The sections of the novel takes place on a single day of a specific year. The year is further defined by the cycle of seasons. For example, the opening year, 1880, has Colonel Abel Pargiter visiting his mistress, Mira, in a dingy suburb. and opens with “It was an uncertain spring.” At home, his wife is dying.

As the novel progresses, we encounter the Colonel’s children. As described by in an essay on the novel by Nuala Casey in London Fictions, they are: “Selfless Eleanor, barrister Maurice, homely Milly, romantic Delia, academic Edward, feminist Rose and free-spirited Martin.” Further, writes Casey:

“At first glance, The Years appears to be a family saga worthy of Galsworthy, a radical departure from Woolf’s modernist masterpieces such as Mrs. Dalloway and The Waves but as you read on it becomes apparent that the author is doing something very interesting and very different here. This is Woolf’s, possibly subconscious, swan song, where she bids farewell to the present through a dreamlike journey through her past.”

The Years was a success on both sides of the Atlantic, and in fact, made it onto several best seller lists in North America despite its very British flavor. It was, by many accounts, the most popular of her novels during her lifetime. Here’s a typically laudatory review from 1937, the year in which it was published:

From the original review in the Montreal Gazette, April 3, 1937:  It is six years since Virginia Woolf has given us a novel — and six years is a long time to wait for Virginia Woolf. Especially after such a book as The Waves.

After The Waves, so beautiful, so significant, but so utterly strange in form as to baffle many readers, where was Mrs. Woolf going, what was to be the next step?

The Years is the answer. The monologues have been abandoned. This is natural: they were for the one book; the author has not pressed on to the remote inaccessible reaches of style The Waves might have foreshadowed.

Nor has Mrs. Woolf retreated to the ordinary straightforward narrative of Night and Day and The Voyage out. She is far beyond the earl method; it is too rigid and machine-like for her Ariel spirit, for her philosophy of Time.

The Years belongs with Orlando, Mrs. Dalloway, Jacob’s Room, and To the Lighthouse. If The Waves was a peculiar intensification, The Years is an enlargement of the essential Virginia Woolf.

With the exception of Orlando, which begins in the days of Elizabeth and follows the changing course of English history to the era of Queen Victoria, the new novel covers a greater span of time than any of them — nearly sixty years.

Nothing happens but the passage of Time

Because of its range, someone has spoken of it with the term “epic,” but you have only to compare it with the rolling grandeur of a War and Peace to realize that epic is not the word.

The Years is certainly not dramatic. Parnell dies. King Edward dies. Some of the other characters die. But, except forMrs. Pargiter, whose death opens the book, the deaths are off-stage, or rather off-page. The people simply sink down under the rising tide of Time; they are engulfed change.

The Great War [World War I] comes in, but it, too, is only an incident in the endless flux. There is an air-raid scene, but the bombs fall on far-away streets; the noise is like a disturbance in a dream.

Nothing happens but the passage of Time, slowly, stealthily, working its change. The leaves fall. Mrs. Pargiter dies. The raindrops fall — “One sliding met another and together in on drop they rolled to the bottom of the windowpane.”

Made up of moments and symbols

The word is lyric. In The Years, as always, Mrs. Woolf writes with an uncanny omnipresence, but her way is not to attempt the telling of all, but to dwell on a detail here and a detail there, to illuminate the moment.

But now much more she reveals by telling less. The Years, like life itself, is made up of moment and symbols. A recurring phrase, a gesture, a snatch of a tune, a fallen tree, the cooing of pigeons, they bind all things together.

“All passes, all changes,” thought Kitty, returning to the country from London. But is there a pattern? wondered Eleanor at the family reunion which closes the book.

“Does everything then come over again a little differently? she thought. If so, is there a pattern; a theme, recurring, like music; half remembered, half forseen? … a gigantic pattern, momentarily perceptible?”

And yet — “Directly something got together, it broke. She had a feeling of desolation. And then you have to pick up the pieces, and make something new, sometimes different.” 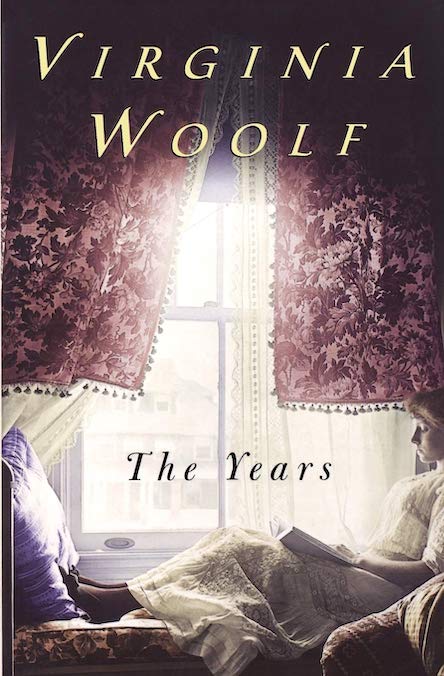 All things must pass

Style and philosophy are inseparable. Virginia Woolf writes in moments, the most trivial moments, because that’s the way she gets at life. Life is not a grand structure but a series — no, not even a series, perhaps: a collection — of moments. Is there a pattern? Who knows? Everything changes, everything passes. What is continuity?

Kitty realizes that the land doesn’t belong to her, but to her children. Does it actually belong to them? No; they too, pass.

Abercorn Terrace belonged to the Colonel Abel Pargiter. It was sold. The Colonel lived on and on, after his wife died, while his children grew up. But at last he disappeared. Abercorn Terrace passed away from the Pargiters.

Continuity and change and time — these are the themes the Virginia Woolf explores, as much in The Years as in To the Lighthouse or Jacob’s Room.

The riddle of personality — who are we?

And the riddle of the personality figures largely as well. Who are we? How can we now others if we do not know ourselves? Can people be whole and free?

“There must be another life, here and now,” thought Eleanor. “This is too short, too broken. We know nothing, even about ourselves. We’re only just beginning, she thought, to understand here and there …”

These absorbing philosophical questions go deeper than the surface changes of history. But The Years moves on more than one plane. Almost imperceptibly, we become aware of changing habits, changing manners, the sinking of one generation, and the rising of another.

One despairs of doing justice to this long novel in a review. One cannot even grasp its full significance in one reading. Not this year, not for many a year, will English literature bring forth a novel more beautiful, more profound.

Quotes from The Years

“There must be another life, she thought, sinking back into her chair, exasperated. Not in dreams; but here and now, in this room, with living people.”

“She felt as if she were standing on the edge of a precipice with her hair blown back; she was about to grasp something that just evaded her. There must be another life, here and now, she repeated. This is too short, too broken. We know nothing, even about ourselves.”

“Love ought to stop on both sides, don’t you think, simultaneously?’ He spoke without any stress on the words, so as not to wake the sleepers. ‘But it won’t — that’s the devil,’ he added in the same undertone.”

“Thinking was torment; why not give up thinking, and drift and dream?”

“Millions of things came back to her. Atoms danced apart and massed themselves. But how did they compose what people called a life?”

“She felt as if things were moving past her as she lay stretched on the bed under the single sheet. But it’s not landscape any longer, she thought; it’s people’s lives, their changing lives.”

“Old age must have endless avenues, stretching away and away down its darkness, she supposed, and now one door opened and then another.”

“But why do I notice everything? She thought. Why must I think? She did not want to think. She wanted to force her mind to become a blank and lie back, and accept quietly, tolerantly, whatever came.”

More about The Years by Virginia Woolf