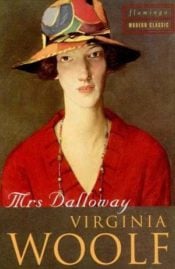 Mrs. Dalloway by Virginia Woolf, published in 1925, describes a day in the life of Clarissa Dalloway, an upper-class woman preparing to host a party that evening. The unique aspect of the novel is that it focuses on her inner world, and that of the peripheral characters, taking the reader as she travels back in time.

As she goes around London, buying flowers and doing other preparations for the evening, she reflects on her youth and her choice of husband. She ruminates on a former suitor, the enigmatic Peter Walsh, and her youthful flirtation with Sally Seton.

The novel covers many themes, encompass time, mental and physical illness, the role of women in society, regret, suicide, sexuality, and more.

In Becoming a Heroine: Reading About Women in Novels, Rachel M. Brownstein (1982) discusses the role of the party that Clarissa Dalloway prepares for:

“The party at the end of Mrs. Dalloway is semi-satirically presented. Like the marriage that concludes the courtship plot, a party is a ceremony symbolic of social coherence. But unlike a marriage, it is a temporary union of a group, not a couple, sanctioned by no gods, and it changes nothing by occurring.

The hostess Clarissa’s creation, her party, stands simultaneously for civilized warmth and beauty, and intimate connections among people, and for those false appearances that betray the soul. She gives her party to pull herself together; becoming a hostess, she flees her real self.”

Unusual for its time in presenting stream of consciousness, the novel was nonetheless met with positive response, and often appears on lists of best novels of the twentieth century. Following are two reviews of Mrs. Dalloway that appeared in the U.S. upon its publication in 1925.

A Novel of One Day: Mrs. Dalloway by Virginia Woolf: A review originally published in The Daily Herald (Chicago), July 1925: Virginia Woolf has written an entire novel about one day. Imagine the facial expression of Sir Walter Scott and his contemporaries if they had been told that such a thing was possible.

Writers of romance, of intrigue and adventure unfolding during the first twenty-five years of a hero’s life, how could they visualize such an innovation! But Virginia Woolf, admirer of Marcel Proust and James Joyce, has done it, and done it admirably.

Mrs. Woolf has evidently aimed to give and has given a cross section in this one day of the lives of a number of characters, some of them entirely unrelated to each other. She has taken each moment of the day, one has to, to make a novel out of fourteen hours. We hear Big Ben strike his solemn tones, sometimes we feel that we almost hear him tick off the minutes. 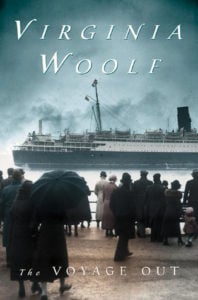 Details of inner life
And we pass quite naturally and without visible transition from Mrs. Dalloway as she sits in her luxurious sitting room, taking a stitch in the evening dress which she will wear at her party that evening, to Septimus Warren Smith who sits in Green Park and whose only connection with Mrs. Dalloway is that he is alive and in London at the moment when Mrs. Dalloway is stitching her gown.

It is rather exciting process this one of pulling each moment apart to see what it’s made of. We take a moment as if it were a flower, we not with a vivisectionist’s zeal we tear it apart and leave nothing but wisp-like shreds on the grass, sometimes we hold it far off, then close to us, and put it in a vase to keep.

A daring style
‘For you should see the Milan gardens,’ she said aloud. But to whom? There was nobody. Her words faded. So a racket fades. Its sparks, having grazed their way into the night, surrender to it, dark descends, pours over the outlines of houses and towers; bleak hillsides soften and fall in.

But though they are gone, the night is full of them; robbed of colour, blank of windows, they exist more ponderously…’

Mrs. Woolf’s style is broken, choppy, phrases that are rapped out as if by a telegraph instrument. She has attempted something rather daring in this her latest book, and has achieved something very interesting. 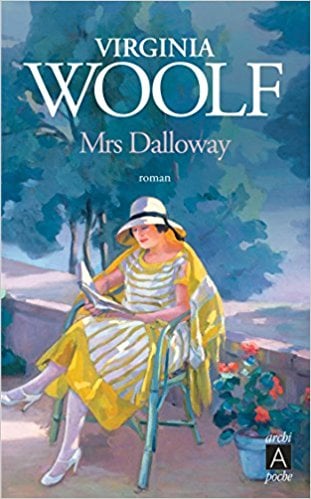 The invisible world: Another 1925 review of Mrs. Dalloway

From the original review of Mrs. Dalloway in the Atlanta Constitution, July 5, 1925: There are few people who can see with their own eyes the invisible world — London, for example, with its sandwich men and barrel organs at Victoria street and its omnibuses in Picadilly.

There are more who can live within a stone’s throw of it all without being really aware of it — externals having for them no actual existence.

London is, as it happens, second in importance only to Mrs. Dalloway, whose day begins with a walk up Bond Street, past the shop where before the war you could buy perfect gloves, to the shop where they kept flowers for her when she gave a party.

Scrope Purvis, who lived next door to her in Westminster, thought her charming — “a touch of the bird about her, of the jay, blue-green, light, vivacious, though she was over fifty, and grown very white since her illness.”

As for her self-estimate, which was worth more than most, for Mrs. Dalloway was honest when one pinned her down. She would have changed everything if it could have gone through a second time.

In the first place, try as she would, she hated Miss Kilman, who had such an odd influence on her daughter, Elizabeth.

Of course, Miss Kilman had been badly treated and had become embittered long before she took up the causes and the self-denial responsible for the green mackintosh coat so distasteful to Mrs. Dalloway. But there it was, and nothing could be done about it — she did not love Miss Kilman.

As for Miss Kilman, she is like one of the lights thrown on the figure of Clarissa Dalloway — a greenish-tinged, distorted light, bringing out a few features with the rest in shadows. Even her conversion (and she felt it deeply) could only change her envy to pity.

What had she in common with this small pink-faced person, dedicated enough since her illness, who frittered away her time on parties and who was, when all was said and done, a bit of a snob?

For Sally Seton, Clarissa’s best friend, admitted that, when Clarissa would never come to see her after she married a miner’s son and lived in Manchester.

But Peter Walsh’s viewpoint is the most trustworthy, because he had loved Clarrisa very much before he went to India and began writing dry sticks of letter which she scarcely read. He said she was hard (though that might have been jealousy) and worldly, because she cared too much for rank and society.

She said insincere things to duchesses and countesses which was partly the reason she resented him calling her “the perfect hostess” in the irritated tone that showed that they mattered not a bit to him. But unfortunately, Clarissa herself did matter — “She stood, as he had often seen her, in a doorway with lots of people … it was Clarissa one remembered.”

A day in the life of Mrs. Dalloway is the whole story that Virginia Woolf tells. A not particularly eventful day, though Peter Walsh, an old suitor, returns from India, and Mrs. Dalloway give a party.

A tragic circumstance brushes closely enough for her to feel its nearness before it veers away, casting a shadow over the end of the party.

“Here’s death,” thought Clarissa. Even here they tell it. A young man who had been in the army had killed himself. Just as if the great clapper of Big Ben had struck suddenly out of the hour.

Through the sunshine of the day there runs a thread of fear — the irrevocable passage of time marked by the leaden bells — the necessity to reassure oneself by doing solid sorts of things in the accustomed way, even in the face of a vague uneasiness.

There was Clarissa tying herself down to actualities by feeding the canary and listening to the cook’s whistling, making outside things like green lights and gay sounds count doubly because of an uneasy internal lack.

Peter Walsh is more definitely philosophical about it — ruminating on a bench in St. James park on the unreality of everything except a state of mind, seeing visions in the branches of trees and having a tendency to “see round” things, due in point of fact to Clarrisa herself.

The crescendo of fear carried to its logical conclusion and looking very stark agains the workaday atmosphere of London, with its carts and perambulators, is reached in the mad Septimus Warren Smith.

From Clarissa buying flowers to Septimus noting revelations on the backs of envelopes there is only the distance of Bond Street to Regent’s Park. But Septimus comes no nearer to Mrs. Dalloway’s world, though his eyes follow the same aeroplane advertising toffee in letters of fire.

Peter Walsh saw him for a moment, walking past as he sat on a bench ruminating on beauty, the mystery of time, and how the dead return.

In the end there remained only the lodging house window, “the tiresome, the troublesome, and rather melodramatic business of opening it and throwing himself out” to escape the doctor who, for that reason, came a little late to Clarissa’s party.

Mrs. Dalloway is the reverse side of a novel of action. It is a chronicle of thought, unforgettably done. Mrs. Woolf tells what is passing in the minds of her characters, enforcing it with interpretive parentheses.

It is as if one watched Mrs. Dalloway’s mental processes (her odd affinities with people to whom she has never spoken) and followed the train of though of Peter (circling always around Clarrisa).

There is, properly, no end to Mrs. Dalloway — no conclusion following a narrative climax. What the last of her facets have been put in place, Clarris stands forth, shining. Thinks Peter:

For there she was.