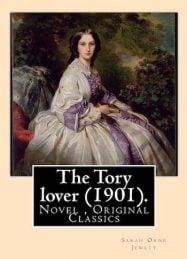 The Tory Lover by Sarah Orne Jewett is a 1901 novel by this esteemed New England author best known for The Country of the Pointed Firs (1896). The story is partly set in Berwick, Maine, where Jewett grew up and spent much of her life, and takes place during the Revolutionary period.

Roger Wallingford, a gentleman of Tory ancestry joins the cause of the Patriots through his love for the beautiful Mary Hamilton.

Mary urges Captain Paul Jones, a compatriot of her brother, to give a commission to Wallingford. A nefarious shipmate contrives to have Wallingford arrested for treachery and desertion, and he virtually disappears. Mary believes that the charges are false, so she and his mother set sail for England to find him and clear his name.

This novel, so very different from Jewett’s other works, mainly sketches of the ordinary people of her time and place in Maine, nevertheless was warmly received. Here is one such review from 1901.

A 1901 Review of The Tory Lover by Sarah Orne Jewett

From the original review in The Brooklyn Daily Eagle, September 27, 1901: The Tory Lover by Sarah Orne Jewett will be read with interest by anyone familiar with her Country of the Pointed Firs, Deephaven, and other novels and short stories.

The Tory Lover is a romance with a historical setting. The period is the Revolutionary era, and the action takes place partly in New England and partly in England. Captain Paul Jones is one of the characters of the story, but her figures in it in a different light from that in which he appears in other novels. 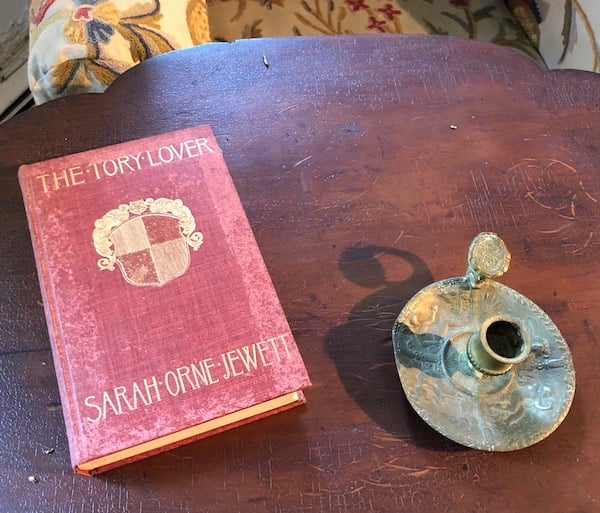 Colonial Portsmouth, 1777, is when the story opens. The heroine is Mary Hamilton, the lovely daughter of an opulent house, devoted to the American cause. The Tory lover is Roger Wallingford, whose love for Mary has won him from his loyalist proclivities. To show his devotion to the patriot cause, he takes service under Captain Paul Jones, on the Ranger.

It is at Mary Hamilton’s behest that the Ranger’s commander enlists the young man. He knows that she looks on him as an old and trusted friend, and that his love is a hopeless passion. He has no time to court her but loves her nonetheless.

An enemy on board, and imprisonment

Roger sails on the Ranger and does good service on board. He has an enemy on the ship, however, named Dickson, who is a traitor to the American cause as well. In a night raid on the town of Whitehaven, in England, in which Wallingford and Dickson are concerned, the latter sees his opportunity for revenge. He betrays Wallingford into the hands of the British.

Returning to the ship, Dickson is able to spread a false report about Wallingford, and Paul Jones and his comrades believe that he had returned to his Loyalist sentiments and had played the part of a spy and a traitor.

Wallingford is taken to prison and the news of his captivity at last reaches his home in New England. His mother, who is known as a Loyalist, starts out to secure his release and Mary Hamilton accompanies her. She has not the slightest doubt of her lover’s fidelity to the American cause.

The story then shifts scene to Bristol, where the two women find good friends and are able to bring their influence to bear to secure a pardon for the young lieutenant. But when they go to the prison they are met with the news that Wallingford, with one or two others, has just escaped, and no one knows where they are.

Paul Jones, going ashore in disguise, encounters Mary Hamilton in Bristol, and there gathers intelligence that leads him to think that Dickson is a traitor. The end of the story is worked out with a great deal of dramatic skill and the ending is sure to satisfy the reader.

So much for the outline of the tale. The reader will note that while the story has a historical setting, it is not a historical novel. We don’t know that any of the incidents, same some phases of the Ranger’s cruise, figure at all in actual history or tradition. It’s not necessary for the scheme that the author had in mind. The Tory Lover is a romance, pure and simple, but it is one portrayed with a fine touch.

Wallingford is a fine young fellow, but one feels more interest in Mary Hamilton. She’s drawn with a delicate touch, and even the ideal portrait of this charming heroine, painted by Marcia O.Woodbury, which serves as a frontispiece to the book, hardly does her justice.

Paul Jones as a lover shines in a positive new light. He’s much more than just the dashing rover in this story; he’s a gallant and tender gentleman. When Mary looks him straight in the eyes and tells him of her faith in her lover’s honeys and loyalty to the cause he served on the Ranger, Paul Jones receives this evidence of love for another as a loyal gentleman should.

The scene in the little inn where Dickson’s treachery is made clear is also a strong bit of work. Miss Jewett has a reputation for excellence, but she has never done better than The Tory Lover. The story is well sustained throughout, but her pass aren’t overcrowded with action. The love story is subtle, charming in every line, while the literary quality of the story is top notch.