The Country of the Pointed Firs by Sarah Orne Jewett (1896) 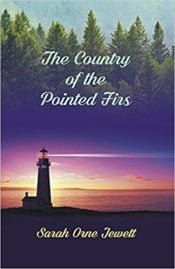 The Country of the Pointed Firs by Sarah Orne Jewett (1896) is often cited as this New England author’s most important work. Neither a novel nor traditional short stories, this book is rather a series of linked sketches of a fictional Maine seaport town called Dunnet Landing.

A quietly evocative writing style conveyed everyday events and quiet emotions, the joys as well as the inevitable losses and hardships experienced the people living in Maine’s coastal fishing villages. Crafting a portrait of a disappearing way of life with this book and the others that she wrote, Jewett helped popularize the genre of regionalism in fiction.

In that way, her work might be seen as a predecessor to the contemporary Maine author Elizabeth Strout, who used a similar device of linked tales in Olive Kitteridge.

By fictionalizing a real place that she knew well, and drawing more from experience than incident, Jewett was free to take the mundane reality of coastal life in a specific place and time and connect it with universal human issues.

Jewett was a mentor, colleague, and friend of Willa Cather, who admired her greatly. In 1925 (some 16 years after Jewett’s death), she wrote:

“If I were asked to name three American books which have the possibility of a long, long, life, I should say at once: The Scarlett Letter, Huckleberry Finn, and The Country of the Pointed Firs. I can think of no others that confront time and change so serenely.The last book seems to me fairly to shine with reflection of its long joyous future.

It is so tightly, yet so lightly built, so little encumbered with the heavy materialism that deteriorates and grows old-fashioned.

I like to think with what pleasure, with what a sense of rich discovery, the student of American literature in far distant years to come will take up this book and say, ‘A masterpiece.’

It will be a message to the future, a message in a universal language, like the tuft of meadow flowers in Robert Frost’s fine poem, which the mower abroad in the early morning left standing, just skirted by the scythe, for the mower of the afternoon to gaze upon and wonder at the one message that even the scythe of Time spares.”

Unfortunately, The Country of the Pointed Firs doesn’t stand among the American classics that are still read and studied. Cather modestly left out her own books, many of which have become classics.

Willa Cather recognized that The Country of the Pointed Firs was Sarah Orne Jewett’s masterpiece. It was well regarded in its time, and it’s never too late to rediscover a worthy classic. Following is a review that captured the spirit of this book, from the year in which it was published. 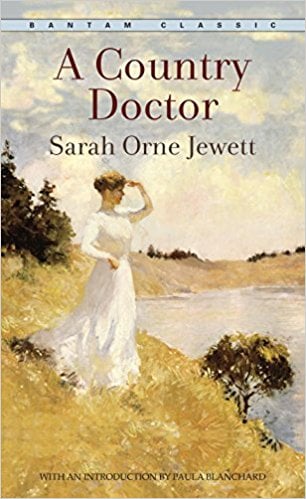 You may also enjoy: A Country Doctor by Sarah Orne Jewett

An 1896 review of The Country of the Pointed Firs

You read, turning page after page, charged with the dainty landscape pictures and with the half-humorous, half-pathetic, yet wholly human and natural sketches of the odd individualities which the author finds among them.

You are waiting all the while for the story to begin and the plot to develop, when, lo, the end is reached, and there is no plot, only a series of bright and sunny sketches, flecked here and there, like the landscape, with bits of cloud shadows.

It is a tale of a summer spent in one of the nooks of the Maine coast, away from the currents of tourist travel. The author’s method is so entirely natural and unaffected that you do not suspect the art of it until the last leaf is turned and your are in a condition of pleased surprise to find how you have been beguiled.

Her quick sympathy and abiding regard for the sterling hearted, simple folk about her has helped her to catch impressions that are photographic for clearness and fidelity to nature, while her pictures are as full of warmth and color as a June day on the landlocked, island-studded bay which fronts the country of her sojourn.

There is no searching for queer characters, no straining for dialect effects. The author takes the people as she finds them, those that cross her path every day, and sets them in a series of miniatures that are wonderfully lifelike. You feel that you know them.

You are on a familiar footing with the strong-minded, masterful, yet wholly womanly Mrs. Almira Todd, and take a keen interest in her “her decoctions.”

The visiting friend, Mrs. Fosdick, is another exquisite bit of character drawing, while the pictures of Mrs. Todd’s mother, the sweet, simple hearted, lovely old woman, whom you visit at her island farm home, are as fine as a nosegay of mignonette from her old-fashioned garden.

The descriptions of the mustering of the clans of the Bowden family at the old homestead, back among the hills, and of the people encountered there, the ride to and from the rendezvous in the high wagon from the Beggses, is a bit of exceptionally fine literary work, full of mental snapshots that are perfect in their realism.

We do not think this author has ever done better work than she has given us in The Country of the Pointed Firs.

In 1991 edition of The Country of Pointed Firs, Douglas Alvord, the illustrator of this edition, offers these insights:

“Although Jewett has always had a small and loyal following, not until recently have contemporary readers begun to regard her works with an appreciation of their solid portrayal of that moment in this country’s history just before its headlong rush to industrialization. The quiet, rural way of life so evident in her writing seems to attract consideration in a time when our own roots are fragmented and our pace frenetic …

The late nineteenth century produced a wealth of parochial genre studies but few were the stuff of literature. Jewett rises above them because she was a keen observer of human nature and expressed simple lives in universal themes.

When she describes Mrs. Todd, walking away from her companion after having revealed a hidden heart over a lost, unrequited love, the line, ‘She might have been Antigone alone on the Theban plain’ is no intellectual affectation but apt observation. She was also a master craftsman and encouraged others, such as the young Cather, to write as though each word were forever.” 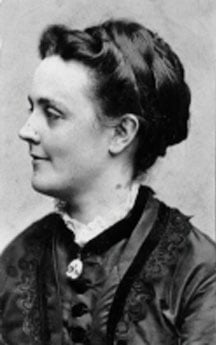 Quotes from The Country of the Pointed Firs

“When one really knows a village like this and its surroundings, it is like becoming acquainted with a single person. The process of falling in love at first sight is as final as it is swift in such a case, but the growth of true friendship may be a lifelong affair.”

“In the life of each of us, I said to myself, there is a place remote and islanded, and given to endless regret or secret happiness; we are each the uncompanioned hermit and recluse of an hour or a day; we understand our fellows of the cell to whatever age of history they may belong.

“There was in the eyes a look of anticipation and joy, a far-off look that sought the horizon; one often sees it in seafaring families, inherited by girls and boys alike from men who spend their lives at sea, and are always watching for distant sails or the first loom of the land. At sea there is nothing to be seen close by, and this has its counterpart in a sailor’s character, in the large and brave and patient traits that are developed, the hopeful pleasantness that one so loves in a seafarer.”

“There is all the pleasure that one can have in gold digging in finding one’s hopes satisfied in the riches of a good hill of potatoes.”

“A community narrows down and grows dreadful ignorant when it is shut up to its own affairs, and gets no knowledge of the outside world except from a cheap, unprincipled paper.”

“In these days the young folks is all copy-cats, ‘fraid to death they won’t be all just alike; as for the old folks, they pray for the advantage o’ bein’ a little different.”

“In that handful of houses they fancy that they comprehend the universe.”

*This post contains affiliate links. If the product is purchased by linking through, Literary Ladies Guide receives a modest commission, which helps maintain our site and helps it to continue growing