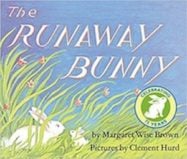 The Runaway Bunny by Margaret Wise Brown was inspired by the French ballad “Les Métamorphoses.” This tantalizing tidbit comes from In the Great Green Room: The Brilliant and Bold Life of Margaret Wise Brown (2016), a fascinating biography by Amy Gary.

If you pursue me
I shall become a fish in the water
And I shall escape you.

And if you become a fish
I shall become an eel
And I shall eat you.

In Margaret Wise Brown’s hands, the theme of escape and pursuit morphs into a gentle story of maternal love. A little bunny threatens to run away from home in an imaginary game of shape-shifting. The loving and steadfast mother promises to find her child each time he threatens to escape by doing some shape-shifting of her own:

“If you run away,” said his mother, “I will run after you. For you are my little bunny.”

“If you run after me,” said the little bunny,
“I will become a fish in a trout stream
and I will swim away from you.”

“If you become a fish in a trout stream,” said his mother,
“I will become a fisherman and I will fish for you.”

The parallel to the French ballad is unmistakable. While the emotional tone is one of love, the mother rabbit’s refusal to let her child explore could be seen as stifling — a midcentury “helicopter parent.” The Runaway Bunny has sold millions of copies and has never been out of print.

Readers and reviewers fell in love with the simple tale from the get-go. Following is a 1942 review, typical of the response to the book when it was first published:

From the original review of The Runaway Bunny by Margaret Wise Brown with pictures by Clement Hurd in the El Paso Post-Herald, May 30, 1942: This little primer age book is as colorfully delectable as any picture boo that ever intrigued an adult purchaser, but it has much more than mere visual appeal to recommend it to the young reader.

First, it is obviously a vocabulary builder, in that it repeats not only words but entire sentence forms. Then, too it is highly imaginative and fairly exudes the spirit of adventure while also suggesting a sense of security in the warm watchful relation between mother and child.

Here’s the little bunny’s adventure: He tells his mother he is going to become a trout in a stream, a rock on a mountain, a bird in the sky, a sailboat, a little boy, so that he can swim, fly, or run away from her.

But the bunny’s mother says to each threat that she will become a fisherman, a mountain climber, a tree to nest in, the wind upon the sea, or just a mother, “to catch you in my arms and hug you.”

Whereupon the bunny wisely decides to forego the adventure to “stay where I am and be your little bunny.” The pictures, many double-page, are as colorful as the flowers that bloom in the spring, and beautifully complement the slight text, the whole conveying a happy effect. 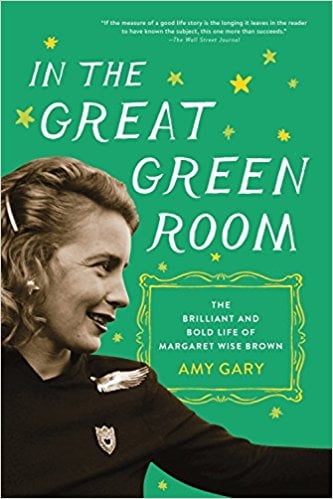 In the Great Green Room: The Bold and Brilliant Life
of Margaret Wise Brown by Amy Gary

More about The Runaway Bunny by Margaret Wise Brown