In the Great Green Room: The Brilliant and Bold Life of Margaret Wise Brown 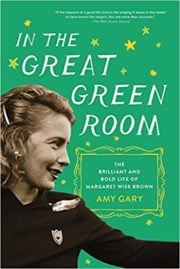 In the Great Green Room: The Brilliant and Bold Life of Margaret Wise Brown by Amy Gary is the life story of the talented woman who created the classic children’s books Goodnight Moon and The Runaway Bunny.

Though Margaret Wise Brown was only forty-two when she died unexpectedly, around one hundred books she wrote were published in her lifetime. Dozens of other manuscripts were found after her death.

Margaret was not only a prolific writer but an influential editor who helped usher in the golden age of children’s books in the mid-twentieth century.

A publishing legend whose own story is seldom told

Imaginative, adventurous, and bold, she was a publishing legend most of us know little about and whose legacy shouldn’t be forgotten. This biography illuminates her fascinating life story.

Description of In the Great Green Room from the Flatiron Books edition, ©2016: The extraordinary life of the woman behind the beloved children’s classic Goodnight Moon and The Runaway Bunny comes alive in this fascinating biography of Margaret Wise Brown.

Margaret’s books have sold millions of copies all over the world, but few people know that she was at the center of a children’s book publishing revolution. Her whimsy and imagination fueled a steady stream of stories, songs, and poems. She was renowned for her prolific writing and business savvy, as well as her stunning beauty and endless thirst for adventure.

Margaret started her writing career by helping to shape the curious for the Bank Street School for Children, making it her mission to create stories that would rise above traditional fairy tales and allowed girls to see themselves as equals to boys.

At the same time, she also experimented endlessly with her own writing. Margaret would spend days researching subjects, picking daisies, gazing at clouds, and observing nature, all in an effort to precisely capture a child’s sense of awe and wonder as he or she discovered the world. 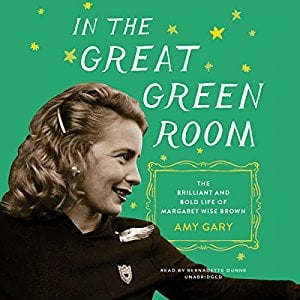 Embraced life and love with a passion

Clever, quirky, and incredibly talented, Margaret embraced life with passion, lived extravagantly off her royalties, went on rabbit hunts, and carried on long and troubled love affairs with both men and women.

Among them were the two great loves in Margaret’s life, one of whom was a gender-bending poet and ex-wife of John Barrymore. She went by the stage name Michael Strange, and she and Margaret had a tempestuous yet secret relationship. At one point they lived next door to one another so they could be together.

A late engagement, an unexpected death

After the dissolution of their relationship and Michael’s death, Margaret became engaged to a younger man who happened to be the son of a Rockefeller and a Carnegie. But before they could marry Margaret died unexpectedly at the age of forty-two, leaving behind a cache of unpublished work and a timeless collection of books that would go on to become classics in children’s literature.

Author Amy Gary captures the eccentric and exceptional life of Margaret Wise Brown and, drawing on newly discovered personal letters and diaries, reveals an intimate portrait to a creative genius whose unrivaled talent breathed new life into the literary world.

In 1990, Amy Gary discovered hundreds of unpublished works by Margaret Wise Brown in Margaret’s sister’s attic. Since then, Gary has cataloged and researched all of Brown’s writings.

She has been covered in Vanity Fair, Entertainment Weekly, and on NPR, among other media outlets. She was formerly the director of publishing at Lucasfilm and headed the publishing department at Pixar Studios. Visit her on the web AmyGary.com.

*This post contains Amazon Affiliate and Bookshop Affiliate links. If a product is purchased by linking through, Literary Ladies Guide receives a modest commission, which helps maintain our site and helps it to continue growing!