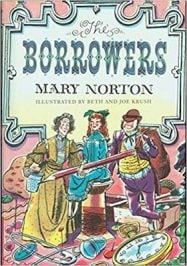 The Borrowers by Mary Norton (1903 – 1992) is the first volume a classic series of children’s books by this British author. First published in Great Britain in 1952 and in the U.S. in 1954, the Borrowers are perhaps themselves “borrowed” from the tradition of Ireland’s little people.

Humans in  miniature who live behind the wainscoting or under the floors of big old houses, they survive by borrowing whatever it is they need, as their name implies.

As Mrs. May muses in the book’s first chapter, what do you think happens to the countless safety pins, pencils, spools of thread, match boxes, and knitting needles that are lost every day? How do they disappear  without a trace?

The fate of these seemingly lost items, Mrs. May proposes, is in the hands of the Borrowers who have made off with them. That’s believable, isn’t it? Or at least, believable enough for a reader to suspend logical belief while reading this book and its charming sequels.

A 1954 review of The Borrowers

From the original review in the Gazette and Daily (York, PA), June 25, 1954: The Borrowers, written by Mary Norton, is a captivating tale of little people. There are few Borrowers left, for the rush of modern life doesn’t suit them. They like to live in quiet, out-of-the-way country houses where things move in an orderly, well-established pattern and there’s little chance for surprise.

The Clock family, Pod and Homily and their 13-year-old daughter Arrietty, are the last of the Borrowers who live in such a house in England. The entrance to their home is under the grandfather clock that has stood undisturbed for two hundred years.

The only “human beans” in the house are Great-Aunt Sophy, who has been bedridden for twenty years, Mrs. Driver, the cook, and Crampfurl, the gardener. Their actions are predictable and the Clocks live a routine life until Sophy’s grand-nephew comes there to recuperate from rheumatic fever. He is ten years old and quite unpredictable. 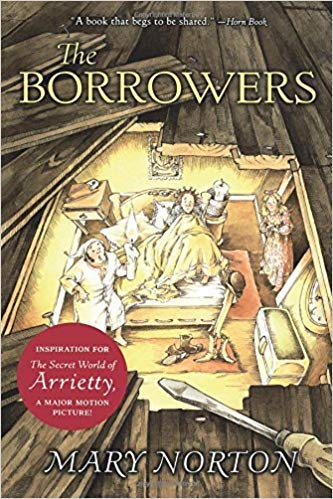 Pod is a successful Borrower, and Homily is a good housekeeper. They have a comfortable home under the kitchen floor, carpeted with red blotting paper, decorated with Queen Victoria postage stamps, furnished with cigar box bedrooms, match box chests of drawers, a pill-box chair and a trinket box settee.

Despite all these comforts, the family is cautious. Arrietty has never been outside. Pod and Homily live in constant fear that they will be seen. Uncle Hendreary was seen, and he and Aunt Lupy had to flee to a badger hole. All other families also have emigrated because they were seen.

One day, Pod is seen by the boy, but the youngster, instead of harming the Borrower, proves to be helpful. Later, Arrietty accompanies Pod on a trip to the outer world. She meets the boy, and they become friends.

For a while, the Clocks live in supreme comfort, with the boy supplying them with new doll’s furniture and other gifts. Mrs. Driver notices the disappearance of many items, and before long, the Borrowers are discovered. How the Clocks escape, with the aid of the boy, completes this intriguing tale.

When The Borrowers was first published in England in 1952, it was awarded Britain’s Library Association Carnegie Medal that year as the best children’s book. The story is one that brings to mind such classics as Alice in Wonderland and The Wind in the Willows. 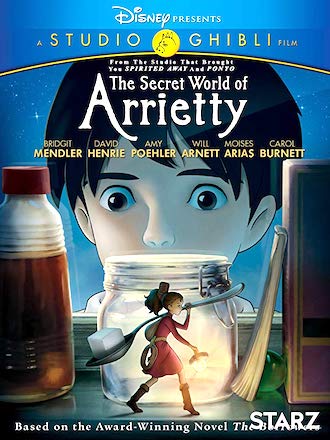 Sequels to The Borrowers, and film adaptations

The first film version of The Borrowers was released in 1997.  More accurately, it’s loosely based on the book, rather than a faithful adaptation, and it received mixed reviews upon release.

Roger Ebert wrote: “The charm comes in the way The Borrowers makes its world look like a timeless story book. If the action and the physical humor are designed to appeal to kids, the look of the film will impress adults who know what to look for.”

A reviewer on Rotten Tomatoes commented: Mary Norton’s children’s books about a family of four-inch-tall people who share accommodations with giant ‘beans (as in ‘human bein’s’) are brought to the screen in beautifully scaled detail, but neither the story nor the characters come alive.”

A Japanese manga-style animated version of The Borrowers called The Secret World of Arrietty, with an all-star Western cast, came out in 2010

In 2011, a British television film version of The Borrowers premiered. I suspect we haven’t seen the last of The Borrowers on the large and small screen, so it may be wise to read the books before exploring these or any future film adaptations! 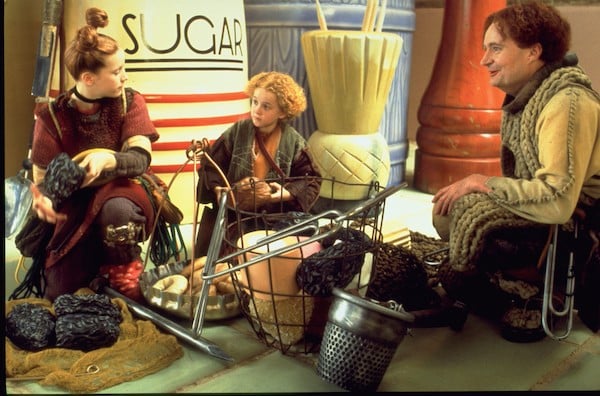 Scene from the 1997 Hollywood movie loosely based on the book

Quotes from The Borrowers by Mary Norton

“Mrs. May looked back at her. “Kate,” she said after a moment, “stories never really end. They can go on and on and on. It’s just that sometimes, at a certain point, one stops telling them.”

“Human beans are for Borrowers—like bread’s for butter!”

“Everything they had was borrowed; they had nothing of their own at all.  In spite of this, my brother said, they were touchy and conceited, and thought they owned the world.”

“I don’t think human beans are all that bad —”
“They’re bad and they’re good,” said Pod; “they’re honest and they’re artful- it’s just as it takes them at the moment”

“She learned a lot and some of the things she learned were hard to accept. She was made to realize once and for all that this earth on which they lived turning about in space did not revolve, as she had believed, for the sake of little people.”