The Bloody Chamber by Angela Carter (1979) 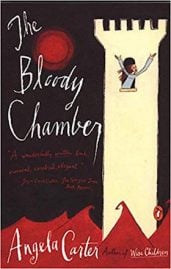 The Bloody Chamber and Other Stories (1979) is perhaps the best-known work by British author Angela Carter (1940 – 1992). A novelist, short story writer, and journalist, she earned a reputation as one of Britain’s most original writers.

Her influences ranged from fairy tales, gothic fantasy, and Shakespeare to surrealism and the cinema of Godard and Fellini. Her work broke taboos and was often considered provocative.

The Bloody Chamber is a collection of re-envisioned imaginings (not, as often described, retellings) of classic European fairy tales. They range in length from very short stories to novellas, and include: 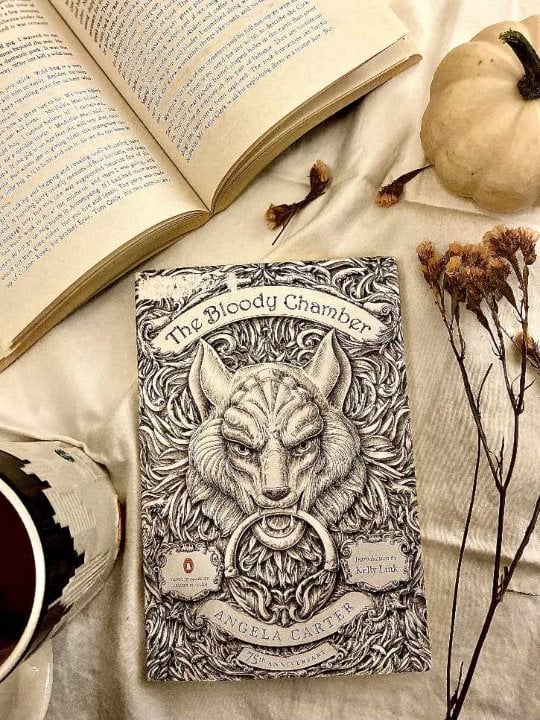 Carter bristled at inaccurate descriptions of this collection, as described in this 2006 article by Helen Simpson in The Guardian, “Femme Fatale: Angela Carter’s The Bloody Chamber”:

“The Bloody Chamber is often wrongly described as a group of traditional fairy tales given a subversive feminist twist. In fact, these are new stories, not re-tellings. As Angela Carter made clear, ‘My intention was not to do ‘versions’ or, as the American edition of the book said, horribly, ‘adult’ fairy tales, but to extract the latent content from the traditional stories and to use it as the beginnings of new stories.’” 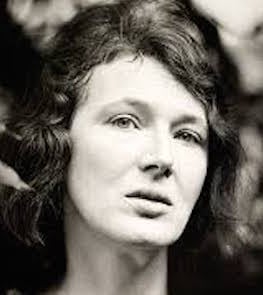 Here are a pair of reviews that appeared when the book was published in the U.S. in 1980.

The Bloody Chamber and Other Adult Tales

From original review in the Chicago Tribune, April, 1980: This very uncompromising British writer has unsettled readers before — with her sex-laden futuristic fantasies (such as The Passion of New Eve) and her feminist study, The Sadeian Woman.

Here now are Carter’s fiendishly droll versions of fairy and folk tales like Little Red Riding Hood and Puss in Boots. Assorted elves and vampires prowl thought these weather overheated pages — but this is a world in which Beauty outwits her Beast and Bluebeard’s wives live to enjoy their husband’s worldly goods.

It is a world where virgins yawn impatiently at the mention of their purity, and Red Riding Hood can murmur, “I love the company of wolves.”

There’s a creepy lubricity in Carter’s elegant prose that will always make her a cult favorite; but to those who appreciated her voluptuous wit, these revisionist contes may seem her best work so far. 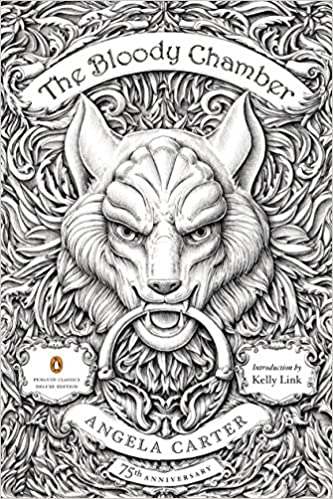 From the original review in the Austin Statesman, March, 1980: Angela Carter. novelist, sometimes feminist, has tried her hand at the near impossible and succeeded She has transformed classic fairy tales into potent adult tales.

Her cunning revisions render “Beauty and the Beast,” “Puss in Boots,” “Bluebeard,” and “Little Red Riding Hood” as dangerous and thrilling as they were in childhood. In sumptuous prose, no cozy moments; the landscape is always slightly askew and even happy endings leave unformed questions and unresolved tensions.

Whether inventing new tales or twisting old ones, Carter infuses her stories with disturbing eroticism as she carefully weaves her way back and forth over the fine line that separates sexuality and violence Sometimes a creature’s deviant need is so great that he must be killed; most often the revelation is that yielding is power and tenderness is salvation.

Carter adopts a different form for each of her ten stories: “Bluebeard” becomes a Gothic romance; “Puss in Boots” turns into a bawdy romp. Carter’s own “Werewolf” is a short brutal folk tale. Each story is a fresh invention and the reader is never allowed to be lulled into the simple litany of children’s stories.

All this intensity is eased by Carter’s wonderful comic ingenuity. She mocks forms even as she adopts them and she wryly returns phrases. Her vigorous, lurid prose finally carries this book and forces suspension of disbelief.

Thick and blood-rich, it overwhelms — Carter’s vivid images stayed with me in my dreams: She warns. “These woods enclose and then enclose again, like a system of Chinese boxes opening one into another; intimate perspective of the woods changes endlessly around the interloper … it is easy to lose yourself in these woods.”

More about The Bloody Chamber by Angela Carter