The Autobiography of Alice B. Toklas by Gertrude Stein (1933) 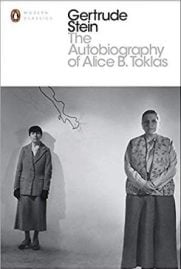 The Autobiography of Alice B. Toklas by Gertrude Stein (1933) is actually Stein’s autobiography, written as if in her longtime companion’s voice.

Considered one of the most accessible of Stein’s experimental, often ponderous works, it was a commercial and critical success. It is indeed narrated as if Alice is doing the writing, and this comes through in a fresh and vibrant manner.

Some of Gertrude’s colleagues didn’t much care for the book. Some thought it too commercial, as indeed, the author admitted that she cranked it out in six weeks as a way to make money. Ernest Hemingway, to whom Gertrude was a mentor, called it “a damned pitiful book,” and her brother, Leo Stein, who disliked Alice, called it “a farrago of lies.”

The book played with the notion of what an autobiography could be and helped to cement the legacy of its author and, no doubt, Alice B. Toklas as well. Following are two reviews from 1933, the year that this unique book was published. 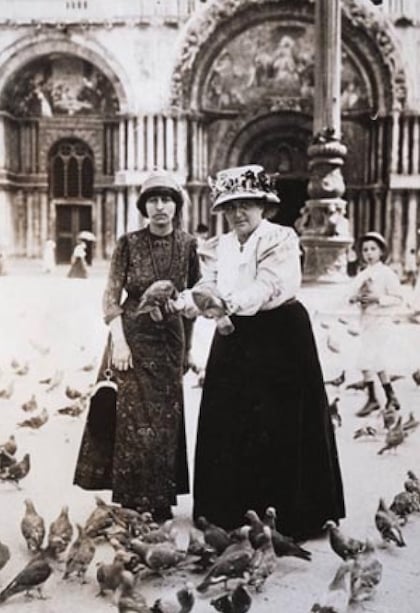 Really the autobiography of Gertrude Stein

For years intelligent readers have known of, if not actually followed, the work of Gertrude Stein. No person with any feel at all for modern American literature has missed Three Lives or the “cuttings from it which have been grafted into the literary work of Ernest Hemingway (to name just one of the writers who have been influenced by Gertrude Stein).

From Three Lives, Gertrude Stein went on to a more complicated, less assimilable theory of writing, which culminated in the idea that this is an age of the sentence as opposed to previous ages of the paragraph.

Much amused and bitter criticism of its obscurity gave Stein’s work the same sort of fantastic praise and blame that was attached to the work of the modern painters (intent upon expressing ideas rather than facts).

For years, everyone, and by everyone I mean everyone who knows about such things, has been trying to get Stein to write her autobiography. The Autobiography of Alice B. Toklas is Stein’s unique way of answering that cry without giving up her theories of the new forms of writing.

Miss Toklas has been inseparable from Stein since 1907 and in writing the “autobiography” of her constant companion, Stein has been able, in an amusing form, to detail her own life completely. The Autobiography of Alice B. Toklas is really the autobiography of Gertrude Stein.

No book I have read recently has given me the sheer pleurae in its writing that this book has. It contains the subtlest undercurrent of humor and satire. It is sharp as the edge of a scalpel. Its sentences are often spike upon which are carried the heads of a whole generation’s foibles, sentiments, critical mistakes, and righteousness. It is wise and it is brilliantly cruel, as truth can be.

If one began quoting sentences, one might quote a third of the book. It is all stimulating to the mind of the reader. He or she need not know the work of the artists and writers who fill its pages. He or she needs only to float in the vividly tangy words and to be refreshed about the importance of creative art.

Not that The Autobiography of Alice B. Toklas is a treatise. It is a record set down with such clarity and rich humanity that it becomes itself a work of creative art. 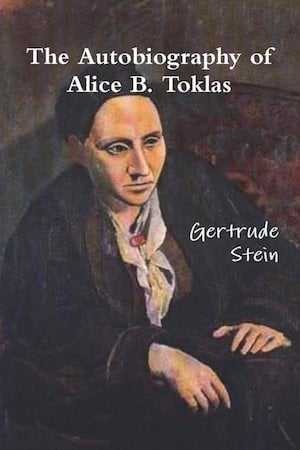 A profound influence on the new arts

From the original review in the Des Moines Register, November 5, 1933: Gertrude Stein, an exponent of surrealism, has exerted a profound influence on the growth of the new art, music, and literature during the great revolution in the arts which came in the twentieth century.

It’s characteristic of her to name this book The Autobiography of Alice B. Toklas, write it herself, and make it ninety-nine percent Stein. Alice was her devoted secretary and companion for twenty-five years and very likely did know much of the enthusiasms of Gertrude. However, she could not have written this vital document of the salon at 27, Rue de Fleurus, Paris.

How Gertrude Stein must have smiled as she had Alice write: “I may say that only three times in my life have I met a genius and each time a bell within me rang. The three geniuses were Gertrude Stein, Pablo Picasso, and Alfred Whitehead.”

Stein attended Radcliffe and Johns Hopkins, but medicine bored her. So she went to Paris, acquired many pictures that now rank among the great moderns, and wrote Three Lives.

An endless procession of unknown young artists sought inspiration in her essential greatness at this time. Picasso, Matisse, Juan Gris, Maris Laurencin, and others knew her approbation. They in turn liked and believed in her revolutionary writing. Picasso was the favorite of them all and the book is filled with stories of him.

Hemingway was a pupil of Anderson and Stein. They later viewed him with some pride and a little shame. He sat at Gertrude Stein’s feet and took “not much” but all he could use. They had much fun over him, saying, “He looks like a modern and smells of the museums.” However, Stein said, “I can’t help it. I have a weakness for Hemingway.”

The Atlantic wrote of Gertrude Stein: “The English reading world may be divided into two groups — those who understand and applaud Gertrude Stein, and those who don’t. Whatever the reader’s sympathies on this question, there is no disputing the fact that she is one of the remarkable women of our time.”

Quotes from The Autobiography of Alice B. Toklas

You should have one absorbing occupation and as for the other things in life for full enjoyment you should only contemplate results. In this way you are bound to feel more about it than those who know a little of how it is done.”

More about The Autobiography of Alice B. Toklas