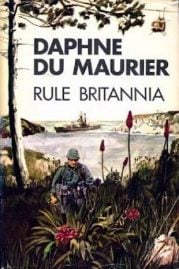 Rule Britannia (1972) was the last novel written by Daphne du Maurier, who was known for her tightly plotted, exquisitely crafted thrillers, including the iconic Rebecca (1938).

The story, set in a future version of England, envisioned the withdrawal of the United Kingdom from the EEC (European Economic Community), a body that was incorporated into the European Union in 1993, well after du Maurier’s time. It was almost as if she was envisioning Brexit.

In fact, the Times of London called it a “Brexit novel,” placing it among others that envisioned Britain striking off on its own in an April 2019 article by Lucy Scholes:

Virago Modern Classics reissued Rule Britannia in 2004, and summarized the plot as follows:

“Emma wakes up one morning to an apocalyptic world. The cosy existence she shares with her grandmother, a famous retired actress, has been shattered: there’s no post, no telephone, no radio —  and an American warship sits in the harbor.

As the two women piece together clues about the ‘friendly’ military occupation on their doorstep, family, friends and neighbors gather round to protect their heritage. In this chilling novel of the future, Daphne du Maurier explores the implications of a political, economic and military alliance between Britain and the United States.”

Du Maurier seemed to enjoy writing the novel, finding it clever and satirical. This one was a departure from her usual style, and the result was not kindly met by critics. Some called it absurd or silly; even her biographer, Margaret Foster, deemed it her worst book.

However, the book is being reconsidered in the light of today’s politics. It’s not as far-fetched as it seemed upon first publication. Reader ratings of Rule Britannia on Goodreads are mixed, though a number of them enjoyed the book and noted that it was quite prescient.

And not all critics were scathing at the time it was published; the following review of the novel upon its American publication was a bit more measured. 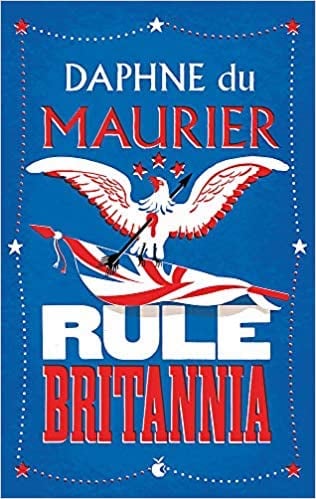 A 1973 review of Rule Britannia by Daphne du Maurier

From the original review of Rule Britannia by Daphne du Maurier in The Anniston Star, January 1973:  It is an England of some unspecified future year, close enough that most resent day people and events are still very much in evidence.

But history is shifting, economically, culturally, and socially, and the powers that be have secretly taken matters into their own hands to form a union of the English-speaking people of Great Britain and America.

The first inkling Ellen, Mad and the boys have of the coalition out there in Cornwall is the sound of planes and the sudden appearance of American marines in their own field. It seems they are in protective custody of some sort, and things are rapidly going from bad go worse.

Now, Mad is not the sort of woman to take such things docilely. At nearly eighty, this famous retired actress still maintains a lively interest in everything, especially her only granddaughter, Ellen, and the six assorted boys, ranging from three years to late teens, that Mad has adopted over the years and set up housekeeping for here in the country.

The Americans get off on the wrong foot by shooting the pet dog of Mr. Trembath, the neighboring farmer. Andy, one of Mad’s boys, eventually retaliates by shooting an American between the eyes with a steel-tipped arrow just outside the house.

This serious matter erupts into a full-scale struggle, as the local people, aided by the mysterious man who lives in the abandoned cottage in the woods, conspire to hide the and protect Andy. And Mad, in her typical unsubtle manner, manages to provoke everyone from the local woman politician to the military authorities, all in the name of protest against the unpopular USUK coalition.

By turns funny and serious, Rule Britannia is surprisingly un-du Maurier, a far cry in theme and style from Rebecca or Frenchman’s Creek, the sort of thing Dame Daphne is famous for.

Like her previous novel, The House on the Strand, it brings in new ideas and new styling, not nearly so appealing, to this reviewer at least, as her finer, more traditional work.