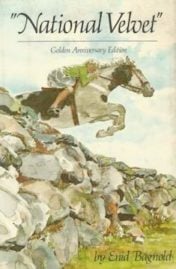 National Velvet by Enid Bagnold is a classic 1935 novel telling the story of fourteen-year-old Velvet Brown, the daughter of a working-class family in England.

Velvet is so horse-crazy that she indulges in both fervent and pedestrian fantasies — going on horseback journeys, leading horses to pastures, and simply grooming them.

Fortuitously, Velvet wins a piebald horse in a village raffle, and around the same time, inherits five other horses from a rich old gentleman who shoots himself in the head once he bequeaths them to her. How’s that for setting up a novel’s plot?

Velvet and Mi Taylor, her father’s hired man, train the unruly piebald horse to race in the Nationals. However unlikely, the tale of overcoming long odds to realize a dream has captured the imagination of generations of readers.

The film is likely equally well remembered as the book, if not more so. In her breakout role, a young Elizabeth Taylor starred as Velvet Brown in the 1944 film version of National Velvet.

The film sweetened the novel, which was filled with idiosyncratic characters, not least of whom was Armity Brown, Velvet’s mother.

Bagnold, having had a reputation as a rather difficult person, may have been speaking through her heroine, who says in the book,  “I don’t like people … I only like horses.” Here’s a lovelier quote from the novel:

“A landscape glittered behind her voice. There were icicles in it and savage fields of ice, great storms boiling over a flat countryside striped with white rails — a chessboard beneath a storm. Horses were stretched forever at the gallop.

Tiny men in silk were brave beyond bearing and sat on the horses like embryos with their knees in their mouths. The gorgeous names of horses were cried from mouth to mouth and circulated in a steam of fame. Lottery, The Hermit, the great mare Sceptre; the glorious ancestress Pocahontas, whose blood ran down like time into her flying children; Easter Hero, the Lamb, that pony stallion.”

A 1935 review of National Velvet

She has written little up to this date, but this book will assure her of lifelong affection in the hearts of all people interested in stories about horses.

The story is highly fantastic and improbable but appealing for all of that. A spindly child of fourteen, Velvet Brown is so foolish about horses that she has cut out all the pictures of them that she can find and has pasted them on cardboard.

To her, they are real; she goes on far journeys on them, she leads them to pastures, she grooms them every day.

Then to her great happiness and to her father’s disgust, she wins the piebald of Farmer Edes in the village raffle and at the same time inherits from a rich old gentleman five other horses. The father orders that Velvet and her sisters must care for the horses. He, a butcher, has no money for grooms.

It is the unruly piebald that wins the heart of Velvet, for into his ear she whispers all her confidences and ambitions. He obeys her every whisper, jumps fences like a dream horse for her — like a winged horse.

The imagination of the child just been fired ever since Mi Taylor, her father’s hired man, who has never been on a horse in his life but who knows all about racing remarks in her presence when he first saw the runaway piebald take a fence, “a horse like that’d win the National.” 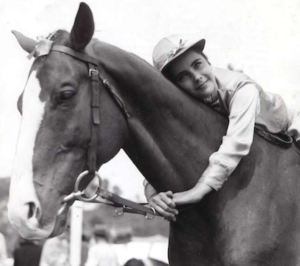 The child aided by Mi, plots that the horse shall enter the National — the greatest race in the world. Skinny, frail little Velvet Brown prays to herself, “Oh God, let me be the best rider in England,” not for the money she would win — the prize never entered her head — but only that the piebald might be entered in the pages of history.

It is in this way that Velvet becomes a national, an international figure.

The bourgeois family life of the Browns is too realistic for pleasant reading, everyone forgets this as they lose themselves in the beautiful and absurd dreams of Velvet concerning her funny looking horse to whom she alone can talk. 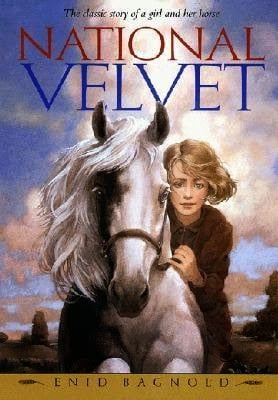 The delight of the reader is heightened by the excellent and beautiful little drawings of horses to help illustrate the book — these help to make the whole improbable tale real — done by the 13-year-old daughter of Enid Bagnold, Laurion Jones.

National Velvet is indeed an entertaining horse story that will take its place in the hearts of readers along with black beauty of their childhood. 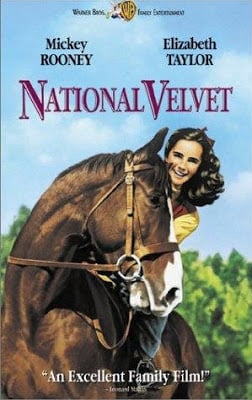 One Response to “National Velvet by Enid Bagnold (1935)”