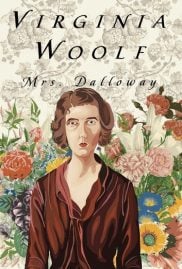 How to select quotes from Mrs. Dalloway by Virginia Woolf, when almost every sentence in the book is quotable? It’s a tough choice, indeed.

The 1925 novel whose narrative is built on the inner consciousness of its characters, particularly Clarissa Dalloway, was groundbreaking in its time. Often called “a novel of one day,” it was almost universally praised for its innovative format. One 1925 review stated:

“Mrs. Woolf makes one aware of one’s own mental experiences in a way no other contemporary writer has ever achieved. Her characters appear upon the scenic screen of Clarissa Dalloway’s consciousness in proportion to her personal reaction to them; and then appear again in a swift soul-probing analysis as they really are.

Clarissa’s charm, her delicate sense of superiority, and naïve speculation upon the problems of others make themselves felt on all with whom she comes in contact. Yet she is loved: one cannot escape her somehow, and, as her returned lover discovers, one can never quite forget her.”

Here is a sampling of quotes from Mrs. Dalloway, though the wiser course would be to read and savor the entire book.

“She felt very young; at the same time unspeakably aged. She sliced like a knife through everything; at the same time was outside, looking on. She had a perpetual sense, as she watched the taxi cabs, of being out, out, far out to sea and alone; she always had the feeling that it was very, very dangerous to live even one day. Not that she thought herself clever, or much out of the ordinary.”

“She thought there were no Gods; no one was to blame; and so she evolved this atheist’s religion of doing good for the sake of goodness.”

“He thought her beautiful, believed her impeccably wise; dreamed of her, wrote poems to her, which, ignoring the subject, she corrected in red ink.”

“Clarissa had a theory in those days — they had heaps of theories, always theories, as young people have. It was to explain the feeling they had of dissatisfaction; not knowing people; not being known. For how could they know each other? You met every day; then not for six months, or years. It was unsatisfactory, they agreed, how little one knew people.” 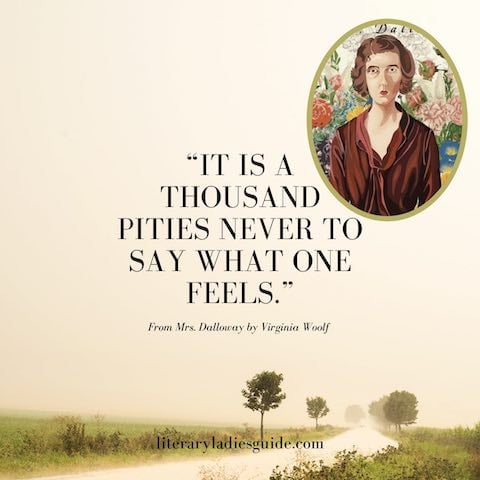 “It is a thousand pities never to say what one feels.”

“There was touch of the bird about her, of the jay, blue-green, light, vivacious, though she was over fifty, and grown very white since her illness.There she perched, never seeing him, waiting to cross, very upright.“

“Mrs. Dalloway is always giving parties to cover the silence.”

“The world wavered and quivered and threatened to burst into flames.”

“Fear no more, says the heart, committing its burden to some sea, which sighs collectively for all sorrows, and renews, begins, collects, lets fall.”

“Her life was a tissue of vanity and deceit.” 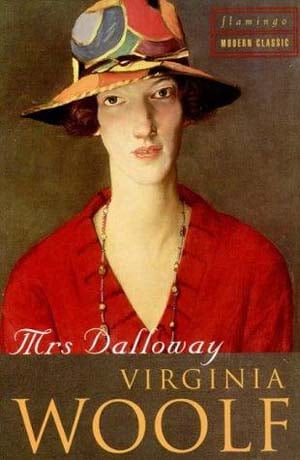 “Did it matter then, she asked herself, walking towards Bond Street, did it matter that she must inevitably cease completely; all this must go on without her; did she resent it; or did it not become consoling to believe that death ended absolutely?”

“For in marriage a little license, a little independence there must be between people living together day in and day out in the same house; which Richard gave her, and she him.”

“With twice his wits, she had to see things through his eyes — one of the tragedies of married life.”

“A thing there was that mattered; a thing, wreathed about with chatter, defaced, obscured in her own life, let drop every day in corruption, lies, chatter. This he had preserved. Death was defiance. Death was an attempt to communicate; people feeling the impossibility of reaching the centre which, mystically, evaded them; closeness drew apart; rapture faded, one was alone. There was an embrace in death.”

“But nothing is so strange when one is in love (and what was this except being in love?) as the complete indifference of other people.”

“This late age of the world’s experience had bred in them all, all men and women, a well of tears. Tears and sorrows; courage and endurance; a perfectly upright and stoical bearing.”

“Her only gift was knowing people almost by instinct, she thought, walking on. If you put her in a room with someone, up went her back like a cat’s; or she purred.

“She had influenced him more than any person he had ever known. And always in this way coming before him without his wishing it, cool, ladylike, critical; or ravishing, romantic.”

“‘Musing among the vegetables?’— was that it? — ‘I prefer men to cauliflowers‘ — was that it? He must have said it at breakfast one morning when she had gone out on to the terrace — Peter Walsh.”

“Did it matter then, she asked herself, walking towards Bond Street, did it matter that she must inevitably cease completely? All this must go on without her; did she resent it; or did it not become consoling to believe that death ended absolutely?”

“And of course she enjoyed life immensely. It was her nature to enjoy. Anyhow there was no bitterness in her; none of that sense of moral virtue which is so repulsive in good women. She enjoyed practically everything. If you walked with her in Hyde Park now it was a bed of tulips, now a child in a perambulator, now some absurd little drama she made up on the spur of the moment.”

“She belonged to a different age, but being so entire, so complete, would always stand up on the horizon, stone-white, eminent, like a lighthouse marking some past stage on this adventurous, long, long voyage, this interminable — this interminable life.”

“That she held herself well was true; and had nice hands and feet; and dressed well, considering that she spent little. But often now this body she wore (she stopped to look at a Dutch picture), this body, with all its capacities, seemed nothing — nothing at all.”

She had the oddest sense of being herself invisible; unseen; unknown; there being no more marrying, no more having of children now, but only this astonishing and rather solemn progress with the rest of them, up Bond Street, this being Mrs. Dalloway; not even Clarissa any more; this being Mrs. Richard Dalloway.”

“What is this terror? what is this ecstasy? he thought to himself. What is it that fills me with this extraordinary excitement?
It is Clarissa, he said.
For there she was.”