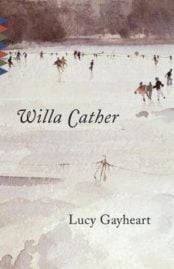 From the original review in The Brooklyn Daily Eagle, August, 1935:  Willa Cather’s Lucy Gayheart looka a wistful way back to the time of the horse and buggy, when some men and some women loved deeply and truly, made themselves miserable, and were attached to their misery.

Small towns, no less than Vienna and the Paris Left Bank and a Greenwich Village as dirty and noisy then as it is now, had romances of which they had a right to be proud.

It was long before Mr. Theodore Dreiser made every young couple paddling a canoe upon a freshwater lake American Tragedy conscious … it was a time when the rich Harry Gordon might mark Lucy for his own, because he knew she would do him honor is the wife and his home and because he loved her.

The singular brightness of young beauty

Nobody in Haverford thought it strange that the son of the Gordons should have picked out the daughter of the little German watchmaker and leader of the town band. They thought it was nice, in the manner of small towns with other things to gossip about.

“Photographs of Lucy mean nothing to her old friends,” Miss Cather explains. “it was her gaiety and grace they loved. Life seemed to lie very near the surface in her. She had that singular brightness of young beauty; flower gardens have it for the first few hours after sunrise.” 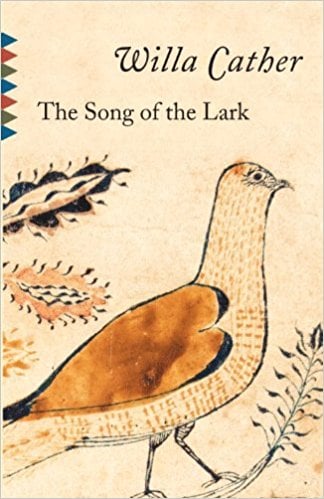 Lucy’s father Jacob, “was a good watchmaker,” but “he wasn’t a good manager.” Lucy’s Sister Pauline did the managing and struggled against the mortgage and her parents’ habit of forgetting an important customer’s timepiece while he gave lessons on the flute in the back of his shop.

As Ms. Cather says, “He took more pains to make the band boys practice then he did to keep up the interest payments,” and later, when Lucy’s heartbreak settled down upon her, poor Pauline was to bring on an emotional crisis, just because she had found profit in raising onions and ordered Lucy’s beloved orchard cut down and the ground prepared for bigger and better crops.

Seeking her fortune in Chicago

Followed by such a background, then, Lucy went up to Chicago to seek her fortune with the piano and to become the accompanist of the great Sebastian, baritone, a darling of the concert circuit.

There was, of course, a Mrs. Sebastian. There always is. So Lucy only went to dinner with the great man. She fed his ego by her frank, almost naked adoration.

When Harry Gordon came to tell her he and she should get married and return to Haverford for the purpose of standing up before the community as pillars of society, they had bitter words. And then it was she lied to him about her relations with Sebastian so that he left the table in the jealous rage of the possessive and unforgiving male, paid the bill, and walked out of the restaurant. 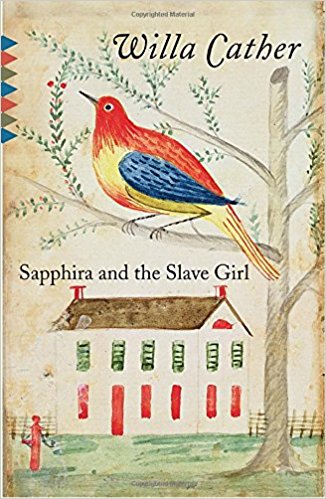 The great tragedy in Lucy’s life was not Harry’s brutal abandonment of her but the drowning of Sebastian. She went back to Haverford. Folks did some talking but when Harry married the loud and conceited other girl, they said he had done badly by Lucy.

As the years wore on, he discovered he had done badly by himself, such was his pride that he never could bring himself to be other than savage and rude, even when he met Lucy on the street.

There follow several fortuitous circumstances, including the reversion of the house to Harry by a mortgage foreclosure, but this was after Lucy no longer had need of a roof over her head. How she came to her end is not for me to tell you.

From another writer, it would droop to the mawkish level of “Hearts and Flowers” or “The Maiden’s Prayer.” As related by Miss Cather, it occurs as inevitable and even Harry’s stumbling into the mournful and ghastly cortège plotting back to the snow from the River plat seems just and fair and probable.

The town, ripe in the intuitions of neighborliness, never quite forgave Harry for going to Denver the day of Lucy’s funeral, but it did not know he had commanded his wife to attend in his stead. Nor could Milton Chase, the bank’s cashier, quite comprehend Harry’s strange interest in the old Gayheart Place nor just why Harry practically ordered him to live in it.

The ways of youth

Miss Cather, though in a grown-up manner, continues to be fascinated by the ways of youth. The ignorance of the young concerning what has been called “the tyranny of little things” is inescapable; the destroying pride of the young which so often robs them of the chance for the happy ending.

Even Lucy could never quite bring herself to call Harry aside and tell him the truth about Sebastian, how she had loved him dearly with her heart but not with her body; even the practical son of the Gordons had to torment himself by snubbing the woman he knew he loved. These things compose the real tale of Lucy Gayheart.

And what could be more typical of love and lovers than having lost the beloved, Harry should move to preserve what remained — an empty house, an orchard grown to weeds, an old barn. As he was to say to his new motor car, forgetful that his wife sat beside him, “Well, it’s a life sentence.”

What ought to have been

He was to conclude that “in spite of all the misery he had been through on her account, Lucy was the best thing he had to remember.” Of such was the autumn of his modest content.

With unobtrusive but compelling power, Miss Cather concludes her tale by taking her reader to stand beside Harry to look at the three little footprints in the concrete and to sigh with her and with him that what ought to have been so seldom was.