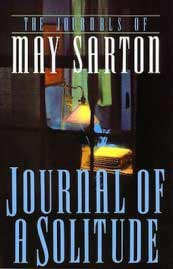 Journal of a Solitude (1973) is May Sarton’s record of a year spent quietly observing her inner world and the natural world around her. In this record of her sixtieth year, she writes with candor about her self, and shares insightful observations about her home, garden, and seasons, as well as books and ideas in her daily life in New Hampshire.

The reader shares a creative and spiritual journey of a talented writer who was occasionally frustrated by the trajectory of her career. The book begins:

“I am here alone for the first time in weeks to take up my ‘real’ life again at last. That is what is strange—that friends, even passionate love, are not my real life, unless there is time alone in which to explore what is happening or what has happened …

I hope to break through into the rough, rocky depths, to the matrix itself. There is violence there and anger never resolved. My need to be alone is balanced against my fear of what will happen when suddenly I enter the huge empty silence if I cannot find support there.”

Journal of a Solitude followed Plant Dreaming Deep (1968), also a diaristic memoir, the first of what would be a series that recorded Sarton’s later years. A highly regarded work, Journal of a Solitude has become a contemporary classic of its genre that was praised upon publication. Here is a typical review:

A 1973 review of Journal of a Solitude by May Sarton

From the original review in the El-Paso Herald-Post, September 22, 1973, by Laura Scott Meyers. May Sarton is a prolific writer, author of 10 volumes of poetry, 14 novels, and lately two autobiographical journals.

She has enjoyed a modicum of success; critics have not ignored her, but she feels “strangled by lack of serious critical attention” and adds “I would be crazy if I didn’t believe that I deserve better.”

The first journal, Plant Dreaming Deep  (1968) was a record of how she found, purchased, renovated and came to live alone in an old house in a New Hampshire village; of gardening, writing, listening to music, walking, and of superficial or close relationships with people.

It sounds idyllic, but now in the second volume, Journal of Solitude, she says that it gave a false view, and some promises that in this book she will try to break through into the rough matrix. She does indeed!

Almost in every entry she reveals her insecurity – her apprehensions, fears, angers never resolved, tears related to frustration. She lives alone “for the reason that I am an impossible creature.”

She has weekend guests, usually women who are her peers and with whom she can communicate; she travels often on speaking engagements, and spends some weekends at some unidentified spot with “X”, her lover, the relationship bitter-sweet with the knowledge that it will end.

She is very subjective, and by her own honesty in describing her emotions, the reader perceives that hers is a fragile craft, that her hold on normalcy is tenuous. 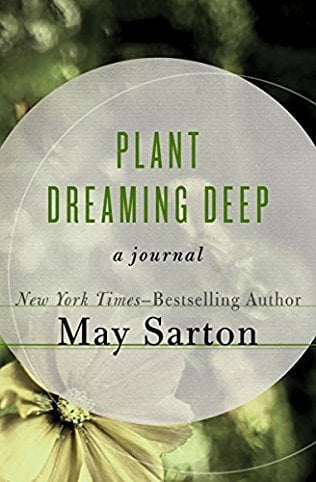 To suffer much and to be articulate and honest about it can be very comforting to readers who have personality difficulties, who are lonely, overly sensitive, hungry for human compassion.

While somewhat depressing the book holds little nuggets of wisdom honed out of introspection and philosophical search. Being rich “is having a margin. The margin is bring able to give.” And on solitude: “boredom and panic are the two devils the solitary must combat.”

The journal reviewed above, was followed quickly by a short novel, As We Are Now. Told in first person in the form of a journal, it is a dramatic and morbid account of an old person’s journey toward mental disintegration.

While not actually sick and still in possession of all her faculties, the central figure of this novel is shunted into what must surely be the worst kind of nursing home, because she is unwanted by a sister-in-law whose home she has disrupted.

“Miss Spencer” is cultured, educated, a retired teacher, now 76, who like the author, has never married, but who has had a long-sustained love affair. 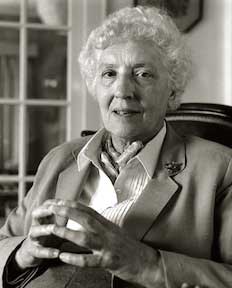 Facing the prospect of aging

It is almost as though Miss Sarton has fantasied and projected herself into a future of cruelty, neglect, and total absence of love.

When Anna, a farm wife on temporary duty, expresses her dismay that this gentlewoman should be in this place, Miss Spencer replies, “Nobody stays special when they’re old, Anna. That’s what we have to learn.” Anna does not believe this wholly, nor do we the readers.

Yet the plight of the aged, the absence of compassion in many nursing homes, the helplessness of old people, especially those without adequate means, is now of widespread concern, the kernel of truth here validates its publication in biting prose. 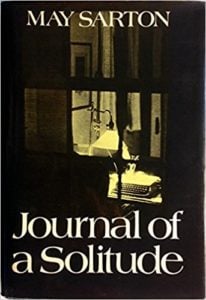 Journal of a Solitude on Amazon*

More about Journal of a Solitude by May Sarton