Plant Dreaming Deep by May Sarton (1968) 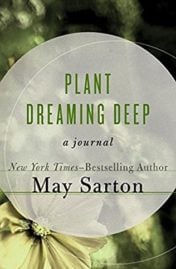 From the Hazleton, PA Standard-Speaker, March, 1968, review by Miles A. Smith of Plant Dreaming Deep by May Sarton, published by W.W. Norton.

The early part of this book describes how the author, in 1958 when she was forty-six, found a dilapidated 18th-century farmhouse in a quiet corner of New Hampshire, settled in it, and began putting down new roots.

It was the first property Miss Sarton ever had owned. The rehabilitation of the house and the problems of furnishing it strike a familiar theme — so many other writers have described similar experiences. Yet she gives the account a fresh, individualistic touch.

The remainder of the book is at a series of essays, describing her reactions to her new environment. She loved the silence and solitude of her retreat, which enabled her to get on with her work as a poet and novelist. The other side of the coin was the times of loneliness and doubt, the self-probing thoughts that arrive in middle age. 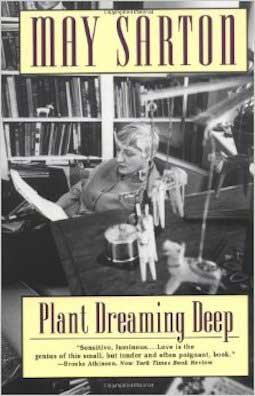 There are other essays about her neighbors, some of whom had been wanderers like herself; the guests who came to visit her; the handyman she enjoyed having work around the place; the flowers she planted; the troubles she had with woodchucks and drought; her appreciation of nature.

Miss Sarton’s clarity of thought and the gentle charm of her prose make this the sort of book you would give to a favorite friend.

More about Plant Dreaming Deep by May Sarton