Elizabeth and Her German Garden by Elizabeth von Arnim (1898) 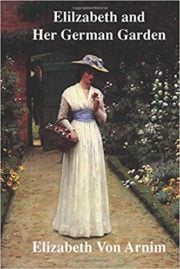 Elizabeth and Her German Garden was published anonymously in 1898. Elizabeth von Arnim, born Mary Annette Beauchamp in Australia, continued to publish simply as “Elizabeth” following the success of this, her debut novel.

Told in the form of a diary, the book is written by a protagonist who, like the author herself, chafes against the conventions of marriage and motherhood and takes solace in her summer garden.

Enormously popular upon publication, Elizabeth and Her German Garden earned the author quite a tidy sum in its time. Though it has had a mini-revival as a quietly feminist tale, it has struggled to maintain stature as a classic.

Unhappily married to “The Man of Wrath”

The husband is referred to as “The Man of Wrath,” which seems comical on the page, but reflected how Elizabeth felt about her real-life spouse, Count Henning August von Arnim-Schlagenthin.

The fictional Elizabeth finds consolation in the beauty of the garden, and maintains her sanity by ignoring the conventions of the day. “I believe all needlework and dressmaking is of the devil, designed to keep women from study,” the heroine of the novel proclaims.

It’s always fascinating to come across reviews of books like this from the time in which they were published, like the following one from 1900. It reinforces that it’s worth preserving in the canon of women’s literature, and rediscovering its author, the elusive Elizabeth von Arnim. 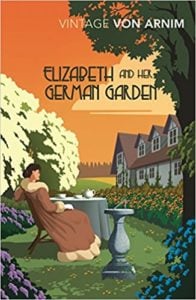 The author remained unknown – a 1900 review

From the review of Elizabeth and Her German Garden by Elizabeth von Arnim in The Lincoln, Nebraska Courier, August, 1900:

The author of Elizabeth and Her German Garden is unknown but she is disseminated  throughout the book and though her readers do not know her name, they know her, which is much more satisfying and intimate.

For this very reason the author has doubtless concealed her name: She has told so much about herself in the book that she shrinks from identifying these confidences with a specific person. It is as though a stranger talked in the dark and fascinated everybody within reach of her melting voice and disappeared before the light was turned on.

And Elizabeth’s lovers are not like Cinderella’s prince, bound to find her at any cost. She has let us know how dearly she prizes the lonesomeness of her retreat and how she dislikes even the intrusion of old friends. She may stay, then, behind her rose bushes, tired of the sounds of talking, of the creaking of chairs, of the everlasting insect buzz of human voices.

Elizabeth has three babies whom she calls by the months of their birth, the June baby, the April baby, and the May baby. She lives in a big house in the country, and of all places in the world where women are allowed no variation at all, the country is Germany.

All the same, Elizabeth lives in her garden, and the babies tumble about on the grass at her feet. They are just as healthy as though their mother were forever pickling, preserving, dusting, and marking linen.

Within an hour or two’s oversight in the morning the servants are allowed to do the work of the house, while the mistress invites her soul into the garden. Her neighbors, who have recurrent brewing, baking, preserving, and washing seasons are scandalized when the seasons come and go and Elizabeth is not driven out of her garden by them.

Insisting on the right to solitude

She has not time for these things and her husband had to get accustomed to a table that is not a triumph of art over nature three times a day. Not that he ever submits gracefully, but he cannot cook as his mother used to, and Elizabeth will not.

She will not allow even her offspring to deprive her of the joy in growing things. She is selfish about her enjoyment of God in nature.

That perhaps is the cause of the effect of restfulness. No one imposes on anyone, least of all, upon the heroine of this book. Her right to a separate existence she does not claim, but she takes it. I wish every woman who is thwarted, or who worries about the nonessentials of life would read this book, and let it influence her to give herself more elbow room. 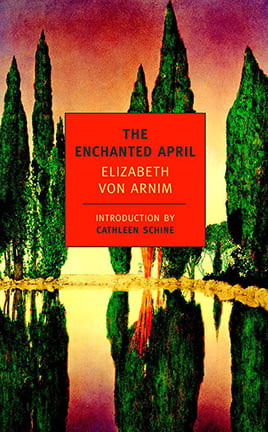 More about Elizabeth and Her German Garden