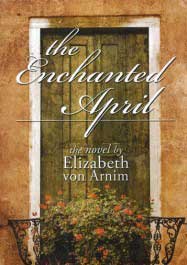 From the original review in the Oakland Tribune, January 1923: The author of “Elizabeth and her German Garden”* has written a humorous and satiric story of four women who rent an Italian castle.

“Elizabeth” is to be thanked for the atmosphere and illusion she creates in “The Enchanted April” and she is to be congratulated warmly for Mrs. Wilkens.

It is an enchanted April this month in Italy, a story of smiles and solid enjoyment and one such as few writers could produce.

Are Italian breezes and views enough to change lives?

Stated badly, there appear improbabilities in the tale.

One may question the powers of reformation in Italian breezes and views and may wonder at the rapid changes the characters undergo. But one will question and wonder a long time after reading the book. The charm and the impression are that enduring.

Mrs. Wilkens is a shy and retiring woman who defers so much to her husband that she is without color and character. No one knows when she is present, no one even thinks of her. The husband, on the other hand, is the life of every party.

Then there is Rose Arbuthnot, deeply religious and becoming more and more self-centered because of the estrangement in her family. Her husband has written some memoirs of famous women who are none too particular in many ways. This grieves Rose and she won’t take any of his money except to give to charity. 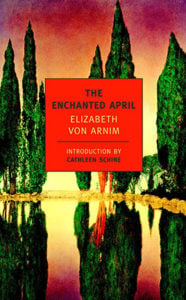 The Enchanted April by Elizabeth von Arnim on Amazon*

Another character in the cast, Lady Caroline, is so beautiful and so winning she cannot be cold and rude for her features and her voice will not betray her intent. She is selfish and she wished to be alone, to go away from everyone she knows, that she might think for once in her life.

With a Mrs. Fisher, more selfish than any, a regular tyrant in securing her rights, Rose and Lotty Wilkens rent a castle in Italy for a month.

The charm is worked on Mrs. Wilkens first. She is filled with the most glorious sensation of happiness imaginable and tries right away to spread the feeling to the rest.

The spell of the castle and of Italy works on all and four lives are changed. This is the story which in outline sounds a bit like Pollyanna, but which, because of the bright lines, flashes of humor, and keen observation is the best book that the new year has yet disclosed.

*Elizabeth von Arnim identified herself only as “Elizabeth” or “The author of Elizabeth and Her German Garden” as her nom de plume on many of her earlier books. 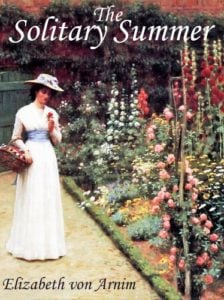 More about The Enchanted April