A Peculiar Treasure by Edna Ferber (1939) 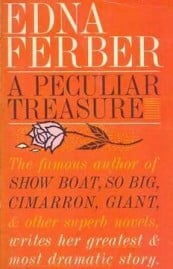 From the review of A Peculiar Treasure by Edna Ferber in The Brooklyn Daily Eagle, February 12, 1939:  Edna Ferber‘s hallmark is a succession of successes, her attainment is the climb to the pedestal upon which she is recognized as one of America’s most proficient and intuitive novelists.

Her philosophy is always that of the typical, middle-class Jew whose faith is American democracy. Edna Ferber comes down to us today in autobiographical form to capture again the pulse of a reading public avid for her understanding and again to pluck upon the heartstrings of a nation she knows so well.

A powerful yet simple autobiography

For the first time the Edna Ferber of Show Boat, Cimarron, So Big, American Beauty, of Pulitzer Prize mention, fashions her own life in a style powerfully simple and inimitably sturdy and discreet. She calls it A Peculiar Treasure.

And while there is much more that she could have explained but confesses she didn’t care to, while she has yet to reveal Edna Ferber in entirety, the author has given us another stirring romance–the life of an artist and her era portrayed with the same commendable objectivity she uses to probe storybook character. 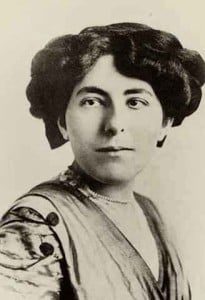 In brief, here’s the story of a little Jewish girl — and the author persists in reminding you of the fact that she is a Jew and an American, and proud of being both — and her peculiar treasure.

That gift is her life, her type of life, at once distinct and distinguished. She could even have written herself into a fascinating novel for this is strictly a success story with the inimitable Ferber weave.

And before she finishes the volume in the manner in which she began it Miss Ferber cannot withstand the great temptation of today. For the filings pungent, denunciating commentary into the faces of the dictators in a fervent defense of her people. And Ferber is sufficiently reserved to demand attention; she somehow doesn’t know how to overdo a subject.

A writer concerned with human decency

“Now we know that today’s confusion is not racial or national but world-wide,” she says. “The whole human race is involved; fundamental human decency is at stake …

I haven’t set foot in Germany since the Nazi or ape-man regime came into power. A good thing for me, I suppose. I probably would step off the boat, slap a Storm Trooper’s face and be shot before I could say Kalamazoo, Michigan.”

Ferner’s humor was inborn; so was, for that matter, a determination that would have enabled her to conquer life’s disappointments even if, as she admits, she hadn’t hailed from the right side of the railroad tracks.

Her fluency in sending one word after another wasn’t inherent; she didn’t realize she was meant to be a prominent novelist until after she has dreamed of a career as an actress and had then gone to work as a reporter for $3 a week.

Illness guided her toward books, of which she has been reading one a day anyhow. And she isn’t at all sorry, although she still feels she could have been a grand girl behind the footlights. 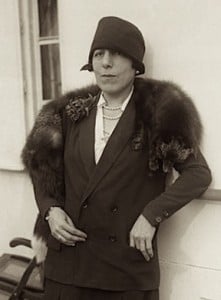 Plodding over the road lined with struggle

The author has been writing for so long a period of time she can’t even remember too well the day she wasn’t looking into the keyboard of a typewriter. And she brings you reasons for much of the style and spirit and character makeup of her novels, from which you learn it was not on the Mississippi she gleaned personal knowledge for Show Boat.

The fact that Miss Ferber has been able to live without much worry and opposition hasn’t limited her appreciation for those who have and are plodding over the road lined with struggle. She attributes this, in part, to a trait that the Jew naturally possesses.

“Two thousand years of persecution have made the Jew quick to sympathy, quick-witted (he’s better be), tolerant, humanly understanding. The highest compliment we can pay a Christian is to say of him that he has a Jewish heart. All this makes life that much more interesting.

It also makes life harder, but I am perverse enough to like a hard life. I like a fighting life. I like overcoming things. Maybe a psychiatrist could tell me why, and it might not prove flattering. Being a Jew makes it tougher to get on, and I like that.” 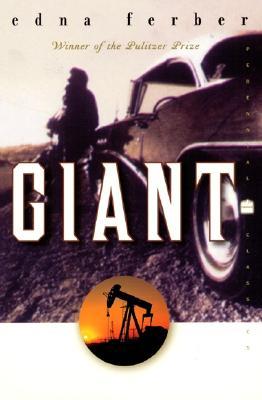 Being a Jew back in Ottumwa, Iowa, and Appleton, Wisconsin, after being born in Kalamazoo, wasn’t simple, either. And yet, she contends, the salient point that the enemies of the Jews do not realize is that by persecuting them they have caused them to feel more conscious of bonds that otherwise would have grown frail with disuse.

“If these fools really want to destroy us,” says she, “they need only let us alone. Incredibly adaptable, gregarious, imitative, we soon would be absorbed by the world about us.

Yet invariably, just as we are slipping into the world mass our identity to be forever lost, along comes a despot who singles us out as an object on which to vent his hate or to satisfy his own or his country’s psychological perversion.”

Pointing to modern Germany’s barren fields of culture, the Edna Ferber who is delighted to have lived her sort of life, “to have been an American, a writer, a Jew,” concludes with “So come revolution! Come Hitler! Come death! Even though you win — you lose.”

Following which she ends with biblical quotation she used so nobly when she began:

“Now, therefore, if you will obey my voice indeed, and keep covenant, then ye shall be a peculiar treasure unto me above all people; for all the earth is mine, and ye shall be unto me a kingdom of priests and a holy nation.”