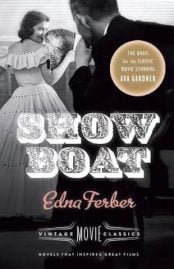 Show Boat by Edna Ferber is a 1926 novel telling the story of three generations of performers on a floating theater, the Cotton Blossom. As the titled show boat travels down the Mississippi River from the 1880s to the 1920s, readers get a glimpse of a forgotten form of American entertainment.

In that era, floating theaters stopped in river towns that normally didn’t have access to high quality performances because of their distance and isolation from major urban centers. Edna Ferber captured the spirit of this way of life with her skillful storytelling and captivating characters.

A daring theme of “miscegenation”

Through the character of Julie, she also sensitively touched on racial topics that was quite controversial at the time — mixed marriage (then called miscegenation where it was illegal) and “passing.”

When the novel came out, it was praised more for its storytelling than as a masterpiece of literature, which was typical of the reception Ferber’s sprawling tales would receive. And like many of Ferber’s works, it has a cinematic and theatrical quality. You can read about how Show Boat went from page to stage to screen (it was actually filmed twice).

Here’s a typical review from 1926, the year the novel was published.

A 1926 review of Show Boat by Edna Ferber

From the August 22, 1926 review of Show Boat by Edna Ferber (Doubleday, Page & Co.), originally published in the New York Times, written by Louis Kronenberger: At a time when realism is all but monopolizing literature, one experiences a sensation of delightful relief in encountering Show Boat.

It is gorgeously romantic – not in the flamboyant and artificial manner of the historical romance which … came definitely labeled before the American public; not staggering beneath a weight of costume and local color.

Show Boat comes as a spirited, full-breasted, tireless story, romantic because it is too alive to be what the realists call real; because it bears within itself a spirit of life which we seek rather than have; because it makes a period and mode of existence live again, not actually different from what they were, but more alluring than they could have been. 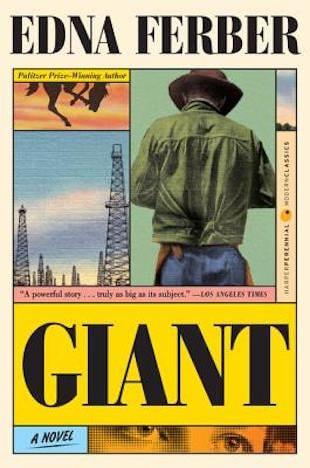 Show Boat is romantic not because its people and events violate any principle of possibility, but because they express a principle of selection. Miss Ferber has chosen the brightest colors and let the dull ones go. She has avoided the contrasts by which the brightness would fade into the common light of day.

After the days of Mark Twain, the Mississippi holds small place in American literature. Now it reclaims its place, happily as the scene of later days than Mark Twain’s.

River travel such as he described had fallen off with the coming of railroads, and Captain Andy Hawks of Show Boat, facing the fact in the late 1870s but satisfied by no life save that of the river, compromised with buying a show boat – one of those floating theatres which moved form town to town for a one or two night stand, by day approaching the town with calliope screaming and flags flying, by night shining with hundreds of lights above the river. 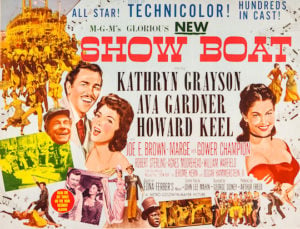 Show Boat went from page to stage to screen

On board with him was his wife Parthy, a hard, gaunt New Englander who should have been a spinster; his daughter Magnolia, at first a child, later on the ingénue of his troupe; the troupe itself, all “picked” characters for the purposes of the novel; and, when the time was ripe, that most engrossing and romantic character of all – Gaylord Ravenal.

Magnolia Hawks was as much in sympathy with her spry half-Gallic little father as his wife was out of it. Parthy Hawks mistrusted the show-boat existence, though in the end her repressions conquered her and made her the show boat’s worst slave.

She also mistrusted Gaylord Ravenal, who came aboard it to act, only because he fell in love with Magnolia. She found out all about him, but she could not keep Magnolia from marrying him.

Show Boat by Edna Ferber is also available on Amazon*

They stole off and were married in a small river town, Ravenal paying the minister with his last $10. How enjoyable a figure he is from start to finish and how flawlessly he comes up to every requirement of his romantic part!

Exiled from New Orleans for killing a man in self-defense; aristocratic and nonchalant, perfectly groomed, a cool, inveterate gambler, leading Magnolia, in after years when Andy Hawks had been drowned, to a see-saw existence in Chicago. Fluctuating with his gains and losses, he leaves Magnolia $600 and goes away forever.

The third generation in Magnolia’s family is her daughter Kim; and though she brings the story up to modern times, she leaves its tone of romance unimpaired. She becomes a great actress in the New York City of today, moving about in a social milieu in which appear such actual figures as Woollcott and Broun, Crowninshield and Swope, Katharine Cornell and Ethel Barrymore, all of them glimpsed fleetingly.

But Miss Ferber carries her story further, makes it swing full-circle. When old Parthy dies, having made half a million with her show boat, Magnolia goes back for the funeral and feels the call of the past.

She can’t leave the “Cotton Blossom,” and down the Mississippi, presumably in this year 1926, she goes with it, stopping on June 2 at a town called Lulu. By bringing the story of the show boat up to date Miss Ferber almost makes the cord snap; but it holds somehow, perhaps because Magnolia herself makes the last romantic gesture. 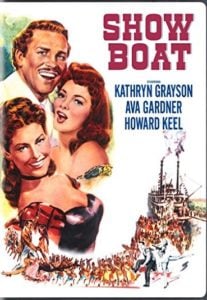 An entertaining document of an American past

All art is a luxury in the sense that it fills a place beyond the physical necessities of life, but some art there is which is entirely ornamental, which does not reveal life, or probe character, or feed the soul. Show Boat is such a piece of writing – a gorgeous thing to read for the reading’s sake alone.

Some, perhaps, will conscientiously refer to it as a document which reanimates a part of the American scene that once existed and does no more. But this writer cannot believe it is that; rather it is a glorification of that scene, a heightening, an expression of its full romantic possibilities.

First-rate storytelling rather than first-rate literature

There was, no doubt, a gallant Andy Hawks in the old days, and a Magnolia, and more Gaylord Ravenals than one; there was such a scene as that recorded of Julie Dozier when she was discovered to have negro blood.

And there was a Parthy Hawks who ran a show boat down the river, an indomitable woman who formed an anomaly among show boat proprietors; but they were never the one group who lived on the “Cotton Blossom.”

Plenty of prose intermingled with the poetry of the true scene, plenty of realism with the romance. And all these things, of course, Miss Ferber knew before and while and after she wrote Show Boat.