Death Comes for the Archbishop by Willa Cather (1927) 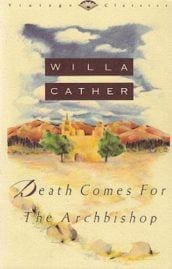 Death Comes for the Archbishop (1927) is often considered one of Willa Cather’s best novels, if not her masterpiece. It’s a fixture on numerous listings of best American literature of the twentieth century. It tells an almost mythic tale of a life simply lived in the American southwest.

Father Jean Marie Latour, the novel’s main character, arrives in New Mexico in 1851 to serve as the Apostolic Vicar. He has traveled there from Sandusky, Ohio, with his friend, Joseph Vaillant, a vicar.

The novel is historically based, drawing from the life of Jean-Baptiste Lamy (1814 – 1888). The plot is inspired by the capture of the Southwest by the U.S. in the Mexican–American War, which took place from 1846 to 1848.

As described in the 1990 Vintage edition:

“What [Father Latour] finds is a vast territory of red hills and tortuous arroyos, American by law but Mexican and Indian in custom and belief. In the almost forty years that follow, Latour spreads his faith in the only way he knows — gently, all the while contending with an unforgiving landscape, derelict and sometimes openly rebellious priests, and his own loneliness. Out of these events, Cather gives us an indelible vision of life unfolding in a place where time itself seems suspended.”

It’s an almost odd entry in the literature of the roaring twenties, the era of Fitzgerald, Hemingway, and Sinclair Lewis. “And in the midst of this,” writes Editor Eric, “Willa Cather was penning a meandering meditation on the life of a couple of good-natured French priests, missionaries really, among the Indians, Mexicans and Spanish settlers of the American southwest in the mid-1800s.”

A 1927 review of Death Comes for the Archbishop

Following is an original review of Death Comes for the Archbishop by Willa Cather, published in the Decatur (IL) Herald, September 1927:

When Willa Cather gave us My Mortal Enemy in 1926, she was apparently in the mood of experimentation, an essay in condensation. Now she is experimenting again but with a different view. She is attempting the final achievement of realism, in creating a novel that can with difficulty be distinguished from biography.

Death Comes for the Archbishop is the story, not of death, but of life, for Miss Cather’s Archbishop Latour died of having lived. She is concerned, not with any climactic moment in a career, but with the whole broad view of the career. There is no climax, short of the gentle end.

A man, in this case a saintly man, lives; works; meets other human beings and affects them for good or ill; dreams; and dies. That is the way of life, in which the crises are rarely labeled and recognized at the time, but are perceived only long afterward in retrospection.

It is not the way of most fiction, which finds it necessary to accelerate the tempo, crowding its action into the brief periods of critical importance, whose significance the reader is permitted to see by an assumption of God-like omniscience.

Telling the story of a life in the manner of life itself spoils, of course, almost all chance of making the story exciting. Not even the most eventful of lives are exciting for more than a moment or two at a time. Many readers with jaded appetites may read all the way through this book with a continual sense of frustrated expectancy — disappointed because so little seems to happen.

Really, a great deal happens. There is danger, heroic courage, successful achievement, strange and challenging experiences, but all are related in the low key of a life-long perspective. It is a book delicate beyond belief; fragrant and shadowed.

For setting, Miss Cather has gone back to that old and mysterious New Mexico whose fascination led her to make an almost fatal digression from the proper scene of The Professor’s House. She tells of the first Bishop of Santa Fe, raised to a vicarage when the United States acquired the territory from Mexico and separated the people by a political boundary from their old church capital in Durango.

Long before, they had been even more effectually separated by the desert, and in their isolation their religious practice had become sadly corrupted by increments from the ancient native superstitions.

To assert authority over this vast territory with its half-wild inhabitants, its traditions of paganism, and its jealousy of interference from Rome, was recognized as an arduous task and a dangerous one. The man chosen was Father Latour, a French missionary priest who had proved his hardiness by his work in the wilderness of Canada and Ohio.

There is no Bishop Latour of Santa Fe in church history, yet so finely is the portrait drawn the one has the constant sense of reading biography. It seems incredible that so complete a man could be contrived by art.

If anything could dispel the perfect illusion of reality, it is the perfection of the character presented. Bishop Latour is  saint; more nearly the living exemplar of his beloved St. Francis than any mortal is expected to be.

Unswerving in his duty, he is yet gently and forbearing; slow to press the issue against priests that had fallen into abhorrent ways, he has a courage equal to any danger or threat when he has taken his stand. 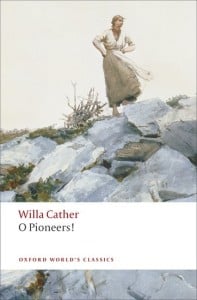 Carrying the church into remote camps

If Father Latour has any weakness of ambition, that the author lets us see, it is his life plan to build a noble cathedral. And this culmination of his work, he is permitted to see.

It is a peculiarity of this novel that it has no woman character of consequence. There is no spice of love-interest, except it be the love of a great and good man for humanity. Yes, and a love of a man for his friend. For his vicar in the desert outpost, Bishop Latour took with him his boyhood friend, from the same village seminary in France.

He is sent here and there, over the whole Southwest empire, subduing rebellious and fleshly pastors, carrying the Church into remote camps, fighting a war that is for him, always exciting, always adventurous.

Kit Carson steps into some of the pages — for Bishop Later touches everybody in his domain. There are magnificent pictures of the old, old pueblos; adventures with the carefully concealed but surviving religion of the Indians; the whole panorama of a developing empire.

Read the book. Read it leisurely, for it withholds its fragrance from those who run. It is a noble contribution to the fine body of contemporary writing.

Quotes from Death Comes for the Archbishop

“The old man smiled. ‘I shall not die of a cold, my son. I shall die of having lived.’”

“They ravaged neither the rivers nor the forest, and if they irrigated, they took as little water as would serve their needs. The land and all that it bore they treated with consideration; not attempting to improve it, they never desecrated it.”

“Something soft and wild and free, something that whispered to the ear on the pillow, lightened the heart, softly, softly picked the lock, slid the bolts, and released the prisoned spirit of man into the wind, into the blue and gold, into the morning, into the morning!”

“Old people, who have felt blows and toil and known the world’s hard hand, need, even more than children do, a woman’s tenderness.”

“One might almost say that an apparition is human vision corrected by divine love. I do not see you as you really are, Joseph; I see you through my affection for you. The Miracles of the Church seem to me not to rest so much upon faces or voices or healing power coming suddenly near to us from afar off, but upon our perceptions being made finer, so that for a moment our eyes can see and our ears can hear what is there about us always.”

“Only a Woman, divine, could know all that a woman can suffer.”

“In New Mexico, he always awoke a young man, not until he arose and began to shave did he realize that he was growing older. His first consciousness was a sense of the light dry wind blowing in through the windows, with the fragrance of hot sun and sage-brush and sweet clover; a wind that made one’s body feel light and one’s heart cry ‘To-day, to-day,’ like a child’s.”

“Everything showed him to be a man of gentle birth–brave, sensitive, courteous. His manners, even when he was alone in the desert, were distinguished. He had a kind of courtesy toward himself, toward his beasts, toward the juniper tree before which he knelt, and the God whom he was addressing.”

“Beautiful surroundings, the society of learned men, the charm of noble women, the graces of art, could not make up for the loss of those light-hearted mornings of the desert, for that wind that made one a boy again.”

More about Death Comes for the Archbishop by Willa Cather