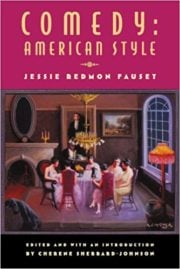 Comedy, American Style by Jessie Redmon Fauset (1882 – 1961) was the last novel by this influential author, poet, and editor associated with the Harlem Renaissance. Published in 1933, the title is completely ironic; this story is, if anything, more of a tragedy.

In this story, Jessie Fauset explores themes of racial identity, self-hatred, and the concept of “passing” in the deeply biased American culture. The main character, Olivia Cary, is domineering mother who wants her children to pass as white, which leads to to dire consequences for the family.

When it was first published, reviews of Comedy, American Style were mixed. Some critics thought Fauset’s writing style rather prissy. Olivia was compared with tragic heroines like Lady Macbeth and Emma Bovary. There were many positive views, as well. Comedy offered, some thought, a more realistic view of the concept of “passing” than Imitation of Life (a big bestseller that same year, 1933) by Fannie Hurst, a Jewish author.

Here’s an original review that was published in a leading black newspaper in 1933, the year in which the book came out. It’s a fascinating perspective on the work of an author being rediscovered decades after her virtual disappearance from the literary scene.

A 1933 review of Comedy, American Style

From The Pittsburgh Courier, December 9, 1933: Jessie Fauset, who, without a doubt, has carved for herself a niche in American literature, scores with this absorbing novel about the eternal color question — inter-racial and intra-racial — in America.

Being a woman of color herself, and having lived in the “land of the free and the home of the brave” practically all her life, Miss Fauset is thoroughly qualified to handle this question of color prejudice found in a class of [black] society little known to white America.

When Olivia was deeply hurt in her childhood by two incidents, she definitely decided that after she grew up she would “pass” over into the white world. So intent was she on being white that for a long time she preferred the company of common white mill hands and drug clerks to that of refined, educated, and cultured people of color.

But Olivia was a reasoning person, and thought that if she could not marry a truly white man of good standing, culture, and education, she would marry one who apparently was white and they could lose their identity, and though their children, go on over to the other side.

With that in mind, Olivia accepts the attentions of Christopher Cary, a promising young doctor, who was as white as she in color, and later married him. She married him without love, only because he was white in color.

Olivia felt absolutely sure that her children would be “white.” Had not her own brother and sister of her mother’s second marriage been white? What had she to fear on this score?

When her first two children were born she rejoiced to know that she had been right. Their whiteness was an assured fact. “Olivia had been positive that all of her Negro blood had been wrought by her white blood to a consistency as pure  … as limpid as that which flowed through the heart of the whitest woman she knew.”

She thought that she had lost through her children the sum total of that black blood she so hated. But she rejoiced too soon, reckoning without Mother Nature, who figuratively laughed in glee when Olivia’s third baby was born. 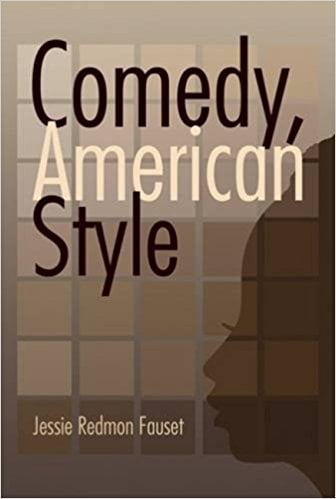 Olivia’s intense hatred of all people of color, her sinister influence over her family, and the resulting tragedy make this book a thoroughly human tale well worth reading. The theme used affords excellent material for the plot, which is developed skillfully and brought to a logical conclusion.

The characterizations are good. There is Olivia Cary with her warped nature, arousing contempt with her passion to be white; Phebe Grant, with her womanly sweetness and understanding; Marise Davies, the beautiful brown girl, whose dancing feet carry her to the heights of acclaim; Oliver Cary, handsome, sensitive, talented brown boy, whose accident of color earns for him his mother’s hatred; Teresa Cary, beautiful, though weak and vacillating, an easy prey for her domineering mother.