Clock Without Hands by Carson McCullers 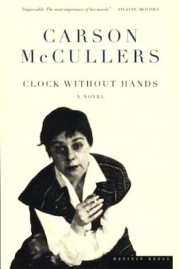 Clock Without Hands by Carson McCullers was this esteemed author’s final novel, published in 1961. When her first novel, The Heart Is a Lonely Hunter, was published in 1940 she became the toast of the literary scene. The novel was wildly successful as were her next three works, all published before her thirtieth birthday.

A novel emerges after a nine-year silence

From the original review in The Kansas City Star (Kansas City, Missouri), September, 1961, by Webster Schott. For nine years Carson McCullers has been silent. She is the author of some of the most piercing fiction published in the United States during the 1940s and 19550s: A Member of the Wedding, The Heart Is a Lonely Hunter, Reflections in a Golden Eye, and Ballad of the Sad Café.

She is the woman whom V.S. Pritchett called “the most remarkable novelist … to come out of America for a generation.” During and somewhat before this nine-year interval McCullers suffered a succession of personal catastrophes — the death of her husband and a series of strokes, the last of which partially incapacitated her at the age of twenty-nine.

There have been other troubles, too. At age forty-three, and after having thought she would never be able to write again, McCullers has produced Clock Without Hands.

Several story lines woven into one

There are several story lines to the novel, all eventually woven into one. The first follows the last year in the life of J.T. Malone, proprietor of an old-fashioned drugstore in a small town in, perhaps Georgia. As the book opens Malone is informed that he is fatally ill with leukemia.

We learn most of what we need to know about Malone’s life: his fading hope as he goes from doctor to doctor, his changing relationship with his sexually vacant wife after he tells her he is going to die, his loss of interest in his business, his involvement with an old friend and drinking buddy, Fox Clane, an aged former congressman and judge.

The second plot concerns Judge Clane. He has a fantastic scheme to get himself re-elected to Congress after a long absence, while also making a fortune. The judge, who drinks, laments and lies to himself as much as any man in recent U.S. fiction, plans to introduce legislation compelling the U.S. government to redeem all outstanding Confederate currency.

The third thread of the story winds around the relationship of Judge Clane’s grandson, Jester, and the blue-eyed Negro youth, Sherman Pew, whom the judge engages as his secretary.

Jester is a late-blossoming homosexual; Sherman is a pathological liar and the illegitimate son of a Negro the judge sent to the gallows for the “rape” of a white woman. 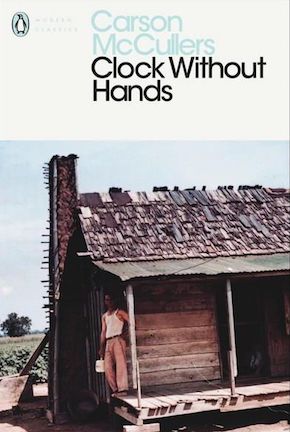 Clock Without Hands on Amazon

As these complex inter-relationships and sequences of action are drawn together we reach the crucial event in “Clock Without Hands.” Sherman Pew discovers the truth of his origin, refuses to help the judge in his deranged dream of creating a new super-white Southern aristocracy, and rents a house in an all-white neighborhood.

The judge organizes a group of high-grade morons and degenerates into a bombing party. The dying druggist, finding a mysterious moral strength refuses to participate in the crime. The rest is inevitable and requires no repetition here.

Although I have now had two days to think about it, I find it no easier or pleasant than right after reading Clock Without Hands to say why it is a poor, unconvincing, and wholly regrettable novel.

Mrs. McCullers repeatedly loses control of her material. Long passages of groovey, hip talk between Sherman and Jester lead nowhere. What begins (with great beauty, I thin) to be a pathos-laden study of a small man’s last days of life turns into a bizarre recitation of a screwball’s aberation, irrelevant visitations to memory, and senile schemes of glory.

The late behavior of Malone, standing against all he has supported in the past, cannot be reconciled with his previously weak character and his adolescent hero worship of Judge Clane.

The homosexual business seems to be just for the hell of it. Judge Clane dominates most of the action in a novel which begins, follows, and concludes with Malone in situations completely unrelated to the judge’s motives and spirit.

The judge’s wildly mad recitation of the Gettysburg Address over a local radio station which he is called upon to make a white supremacist speech after the bombing is taking the easy, accidental way out. Mrs. McCullers’ command of language, once verging on the subtlety of poetry, is absent except in wish.

Clock Without Hands reads like a plan for a novel or a flattened first draft, not the perfected expression of a writer who possesses moral concern and aesthetic awareness.

But, I suppose, we should remember that Hemingway wrote Across the River and Into the Trees and Faulkner wrote A Fable. If Clock Without Hands leads Carson McCullers beyond the present, it will serve a worthy purpose. 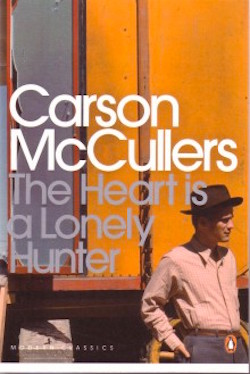 More about Clock Without Hands by Carson McCullers