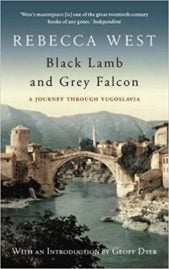 Black Lamb and Grey Falcon: A Journey Through Yugoslavia by Dame Rebecca West is ostensively a travelogue, published as a two-volume set of more than 1,100 pages and half a million words in 1941.

Published both in the United Kingdom and the US., the book presents an exhaustive history of the land and people of the Balkans. Publication coincided with the Nazi invasion of Yugoslavia, and West’s intention was to “show the past side by side with the present it created.”

West researched the book during a 6-week 1937 trip she made there with her then-husband, traveling over much of the terrain of the old borders, including Croatia, Bosnia, Herzegovina, Serbia, and more.

Dedicated to the dead or enslaved

Sadly, by the time she fashioned her research into the tome and had it published, she was compelled to add the dedication: “To my friends in Yugoslavia, who are now all dead or enslaved.”

Though often placed in the travel category, Black Lamb and Grey Falcon transcends its genre and is a deep study of culture, politics, and geography of the region as it was at the time.

Of course, Yugoslavia no longer exists. The two-book set has appeared on lists of “Best nonfiction books of the twentieth century” and it has been praised by readers and reviewers alike as an unusual and extraordinary work of nonfiction.

Rebecca West’s intellect and prose were always appreciated by her contemporaries and the era’s critics, though in all, her legacy is considered by many to be underappreciated.

“Were I to go down into the market-place, armed with the powers of witchcraft, and take a peasant by the shoulders and whisper to him, ‘In your lifetime, have you known peace?’ wait for his answer, shake his shoulders and transform him into his father, and ask him the same question, and transform him in his turn to his father, I would never hear the word ‘Yes,’ if I carried my questioning of the dead back for a thousand years.

I would always hear, ‘No, there was fear, there were our enemies without, our rulers within, there was prison, there was torture, there was violent death.” 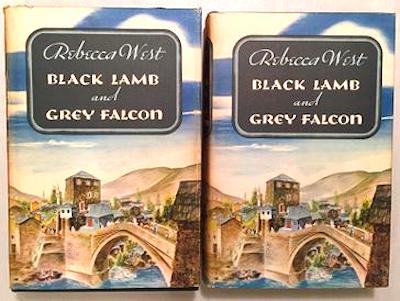 Original covers of the 1941 two-book set

A 1941 review of Black Lamb and Grey Falcon

This 1941 review by John Selby (Literary Guideposts) of Black Lamb and Grey Falcon is typical of the praise this classic work received:

Rebecca West could have told the story of what was once Yugoslavia in half the 500,000 words she used in Black Lamb and Grey Falcon, but I am glad she did not.

As this enormous two-volume work stands now, it contains not only the history and the pertinent fact, but the spirit. Miss West is a writer of prose bordering on genius, and an observer of almost fanatical thoroughness.

Miss West spent years poking about Yugoslavia, often with a Yugoslavian whose wife was a peculiarly unfortunate German. These and other characters in the long narrative are foils to the facts which Miss West uncovers. As they move through the flashing Yugoslavian background they reflect on the tangled past of this strangely assorted people. 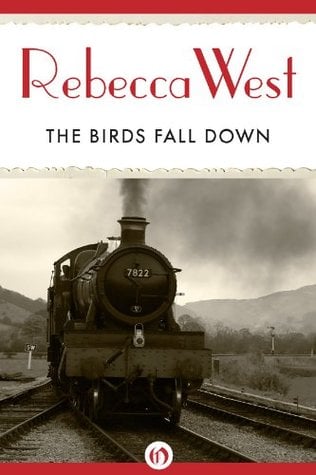 The country may never again be called Yugoslavia, but some of the people will remain essentially the same people the author took such pains to know.

These are an almost incredible people, these Serbs, Croats, and Slovenes. They have been shaped by their bare mountains and fertile oases, primarily, but also by those who have tried to subjugate them, and have succeeded only in conquering them.

There was Rome, many centuries ago, and then a period of glory for the Serbs, and then the Byzantine Empire flowing over and from the east. Later Venice and Austria came from the north, and the Turks with fanatical brutality came again from the east.

The Turks remained over the land five centuries, and the Balkan wars which were the prelude to the World war were only the last throes of the struggles against them. Now the Nazis have come from the more distant north, and the strong faces of the people are again set in lines of hard suffering.

Miss West has no illusions about these man and women, but she loves them. It would be hard to read Black Lamb and Grey Falcon without arriving at the same love though the whirl of color the book throws about them.

No writer has produced a stranger combination of history, travel, racial analysis and sympathetic understanding than Rebecca West has in her Black Lamb and Grey Falcon. This huge two-volume work contains all anybody would need to know about what once was Yugoslavia. It probably contains more than the Yugoslavs know themselves. (John Selby, Literary Guideposts syndicated column, 1941) 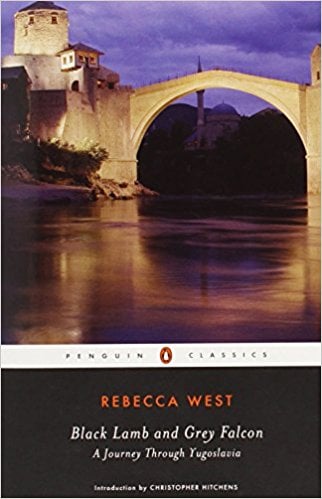 Black Lamb and Grey Falcon by Rebecca West on Amazon

I raised myself on my elbow and called through the open door into the other wagon-lit: — ‘My dear, I know I have inconvenienced you terribly by making you take your holiday now, and I know you did not really want to come to Yugoslavia at all.

There was, however, no reply. My husband had gone to sleep. It was perhaps as well. I could not have gone on to justify my certainty that this train was taking us to a land where everything was comprehensible, where the mode of life was so honest that it put an end to perplexity.

I lay back in the darkness and marveled that I should be feeling about Yugoslavia as if it were my mother country, for this was 1937, and I had never seen the place till 1936. Indeed, I could remember the first time I ever spoke the name ‘Yugoslavia,’ and that was only two and a half years before, on October 9, 1934.

(excerpted from Black Lamb and Grey Falcon by Rebecca West)

More about Black Lamb and Grey Falcon by Rebecca West