We Have Always Lived in the Castle by Shirley Jackson (1962) 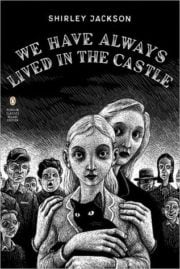 We Have Always Lived in the Castle  (1962) was the last published work by Shirley Jackson during her lifetime.  The narrator, Mary Katherine “Merricat” Blackwood, lives with her sister and uncle on an isolated estate in rural Vermont.

The Blackwoods have been shunned by the neighbors in the nearby village due to a tragedy — murder by poisoning — that occurred some years earlier.

This critically acclaimed novel is considered one of Jackson’s masterpieces; and it has been an inspiration to authors that came after who write in the thriller and mystery genres.

The opening paragraph of We Have Always Lived in the Castle is iconic, and pure Shirley Jackson:

“My name is Mary Katherine Blackwood. I am eighteen years old, and I live with my sister Constance. I have often thought that with any luck at all I could have been born a werewolf, because the two middle fingers on both my hands are the same length, but I have had to be content with what I had. I dislike washing myself, and dogs, and noise. I like my sister Constance, and Richard Plantaganet, and Amanita phalloides, the death-cup mushroom. Everyone else in my family is dead.” 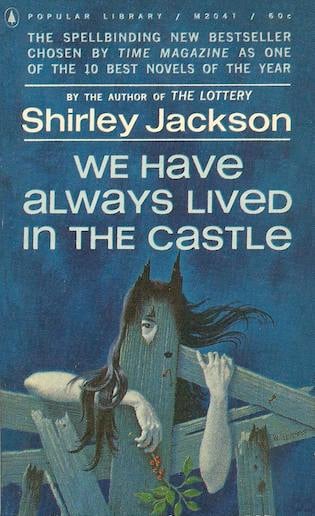 In the 2016 biography Shirley Jackson: A Rather Haunted Life by Ruth Franklin, the book is introduced as follows:

“Castle is told entirely from the perspective of Mary Katherine Blackwood (Merricat, as her sister calls her), Jackson’s most ambiguous heroine. Eighteen years old, she lives with her sister Constance and their uncle Julian, an invalid, in their longtime family mansion.

The rest of the Blackwoods are dead, poisoned six years earlier at the dinner table by someone who put arsenic in the sugar that the family members used to sweeten blackberries served for dessert on that fateful night.

The novel teasingly withholds confirmation that Merricat was the murderer, but there can be no question in the reader’s mind. She chose the poison deliberately to spare Constance (who does not use sugar on her berries), ten years older, whom she adores:

‘She was the most precious person in my world, always.’ Protective of her little sister, Constance took the blame, washing out the sugar bowl immediately to hide the evidence, and stood trial. Even though — or perhaps because — she was acquitted (for reasons that are never made clear), the residents of the village ostracize the family.”

The following is typical of the laudatory reviews that appeared upon the book’s publication:

A 1962 review of We Have Always Lived in the Castle

From the original review by Barbara Hodge Hall in the Anniston Star, October, 1962: A black cat lurks on the dust jacket of Shirley Jackson’s chilling novel, We Have Always Lived in the Castle. He is Jonas, Merricat Blackwood’s beloved pet, and while he has no integral part in this tale of dread, his presence might symbolize the spell of witchery that lies over it all.

Merricat is eighteen, but a strange eighteen, still child-like in habits but a thousand years old in intuition. Her beautiful older sister, Constance, never leaves the grounds of the huge old family home, preferring to hide there keeping house and cooking and taking care of old Uncle Julian.

And the rest of the large family is dead.

This fact is the heart and mystery of the story, for they died all on a single afternoon from the effects of a lethal dose of arsenic hidden in a luncheon sugar bowl. 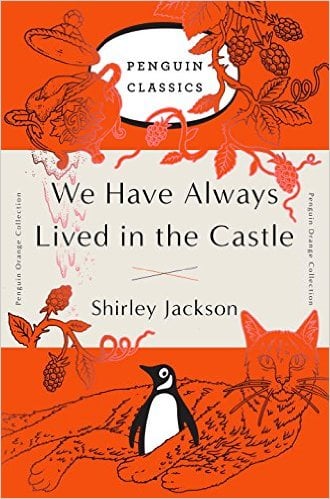 The facts come out

Bit by bit, the facts come out. There has been a murder trial, with an acquittal for Constance. Never well liked, the remaining Blackwoods are now shunned by the townspeople and exist in prosperous and eccentric loneliness.

Only when a cousin, Charles, unexpectedly appears on the scene does the curtain against the outside world part a little. Constance seems tempted to peek out, but Merricat hates Charles with a young witch’s vehemence, and in her resentment nearly destroys them all.

This excellent novel is typical of Shirley Jackson’s style, unusual in its way as her terrifying The Haunting of Hill House. You’ll want to read it in one evening — it’s far too exciting to put down.

Once again, from Shirley Jackson: A Rather Haunted Life by Ruth Franklin:

“Female power and creativity, bottled up too long, turn lethal. This is the closest the novel comes to offering an explanation for the murder. If Merricat and Constance are two halves of a whole, in some ways forming a single person, then it does not matter which of them put the arsenic in the sugar bowl — they are both responsible, and equally justified.

The crime turns their house into a prison, but it is a prison of their own creation in which they shut themselves willingly, as they affirm: ‘We are going to be very happy.'” 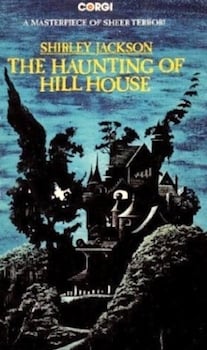 Quotes from We Have Always Lived in the Castle

“I’m going to put death in all their food and watch them die.”

“You will be wondering about that sugar bowl, I imagine, is it still in use? You are wondering, has it been cleaned? You may very well ask, was it thoroughly washed?”

“Fate intervened. Some of us, that day, she led inexorably through the gates of death. Some of us, innocent and unsuspecting, took, unwillingly, that one last step to oblivion. Some of us took very little sugar.”

“We eat the year away. We eat the spring and the summer and the fall. We wait for something to grow and then we eat it.”

“I was pretending that I did not speak their language; on the moon we spoke a soft, liquid tongue, and sang in the starlight, looking down on the dead dried world.”

“I remember that I stood on the library steps holding my books and looking for a minute at the soft hinted green in the branches against the sky and wishing, as I always did, that I could walk home across the sky instead of through the village.”

More About We Have Always Lived in the Castle