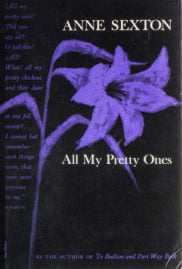 Anne Sexton (1928 – 1974) was an American poet considered one of the pioneers of modern confessional poetry, though her artistry reached far beyond that genre. Her first collection, To Bedlam and Part Way Back, was published in 1960 to critical and public praise. It was followed by All My Pretty Ones in 1962.

During this period, Anne was receiving not only critical praise but prestigious awards as well. These included the Frost Fellowship, the Shelley Memorial Prize, a Ford Foundation grant, and many others. Sexton struggled mightily with mental illness during this fertile time in her creative life.

By the time she won the Pulitzer Prize for poetry in 1966, she had been hospitalized and attempted suicide several times. Her poetry resonated as much with readers as it did with critics. Following is a review of All My Pretty Ones from its time of publication:

From the original review of All My Pretty Ones by Anne Sexton in the El Paso Herald-Post, October 20, 1962: “A work of art may be a revelation. The higher consciousness of the great artist is evidenced not only by his capacity of ordering his experience but also of having the experience,” Robert Shaw once remarked.

And All My Pretty Ones by Anne Sexton brings a poignant assurance that these human capacities are as vital as they ever have been.

Her poetic genius has enabled her to take this language of ours, this same language that so much of our contemporary life uses to make our being — the chatter at a cocktail party, the TV commercial — and create poems that reawaken our wonder at the human capacity for awareness and insight into “the infrared and ultra-violet” of man’s life.

All My Pretty Ones follow Sexton’s first volume, To Bedlam and Part Way Back. The thirty-three poem speak with directness and concreteness of a woman’s life that she accepts the pain, the conflict that are a part of life as a “sign and seal of a deep bond with being.” And with her art, Sexton puts some order to doubt, terror and death, and out of the agony glimpses the reality of love.

This world we live in, a world of hydrogen bombs, cold wars, and revolutions, is a world so mobile we can forget our roots are in the soil. It brings pain and darkness to each of us. The poets of our age have reminded us of this over and over, but none has been more immediate, intense, and personal in the full meaning than Anne Sexton

These poems in this rich art of hers give us hope, for as Eric Bently once said, “… no poet lives through anything isolated. What he lives through all his countrymen live through with him.” This world of the same stars Van Gogh once saw will not let you off easy. But the dimensions of your life will be deepened and enriched by them. — Elizabeth D. Campbell 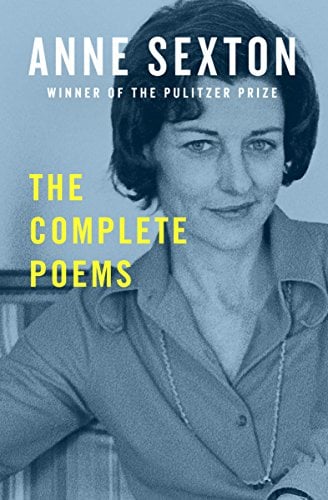 The Complete Poems of Anne Sexton on Amazon