The Well of Loneliness by Radclyffe Hall (1928) 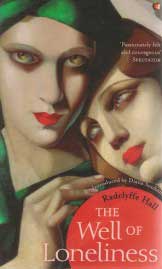 Since its first appearance in 1928, The Well of Loneliness by Radclyffe Hall (1880 – 1943) has spurred much discussion and controversy.

The semi-autobiographical novel about a young woman’s coming to terms with her lesbian identity caused a furor when first published in England. Widely banned, it also went to trial for obscenity.

Once denounced as immoral, it has also been praised as a courageous work of literature. It shocked some members “proper” society and served as an awakening to others who felt isolated by repressive social mores.

At the time it was published, it told the story of same-sex love between women, a topic that was rarely written about outside of scientific textbooks.

According to an introduction to an earlier edition of the book:

“The Well of Loneliness presents the life story of Stephen Gordon, the only child of Sir Philip and Lady Anna Gordon, who ardently desired a son in her place.

How this circumstance influenced a natural tendency towards masculinity in Stephen, her tortured adolescence, and her gradual development into maturity in this direction, with all its tragic implications, is the theme that is explored.

Radclyffe Hall has treated this subject with delicacy and deep psychological insight, combined with frankness and sincerity.”

And more from a later edition of The Well of Loneliness  (1990, Anchor Books/Doubleday):

“Originally published in 1928, Radclyffe Hall’s The Well of Loneliness is the timeless story of a lesbian couple’s struggle to be accepted by ‘polite’ society.

When an unconventional woman named Stephen Gordon falls in love with an ingenue named Mary, their love affair gives Stephen her first taste of happiness.

However, the pleasure the lovers find in each other is quickly tarnished by the disapproval of friends and family who refuse to welcome the scandalous couple into their homes. But the most difficult test of the women’s love for each other comes when a young man offers to give Mary the respectability that Stephen can not.” 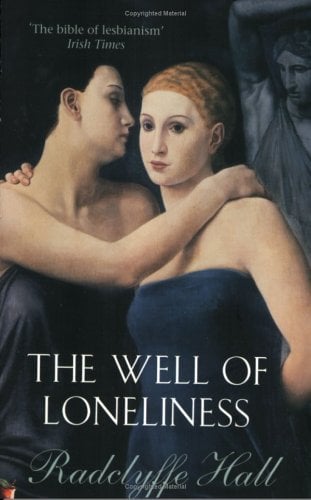 The Well of Loneliness is the thinly disguised story of Radclyffe Hall’s own life. Shockingly candid for its time, this novel was the very first to condemn homophobic society for its unfair treatment of gays and lesbians.

Banned outright in 1928, its publication marked an act of great courage which almost ruined Hall’s literary career. Although many decades have passed since its initial publication, the issued of prejudice and persecution that Radclyffe Hall addresses remain relevant today.

More about The Well of Loneliness