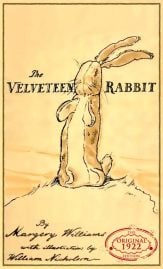 The Velveteen Rabbit (or How Toys Become Real) by Margery Williams was published in 1922 and has been in print ever since. The best-known book by British-born author who was later known as Margery Williams Bianco (1881 – 1944), it has been a children’s classic for generations. In 2022, we celebrate the hundredth anniversary of its publication.

The story is at its heart about the transformative power of love. The original edition was illustrated by William Nicholson, and has been through numerous editions, with artwork by various illustrators.

A 1924 review in The Detroit News observed,  “How Toys Become Real is the inner story of The Velveteen Rabbit, but there’s no syrupy moral to it. It’s just that if a toy is loved enough, it finally, through the alchemy of love, becomes real.” 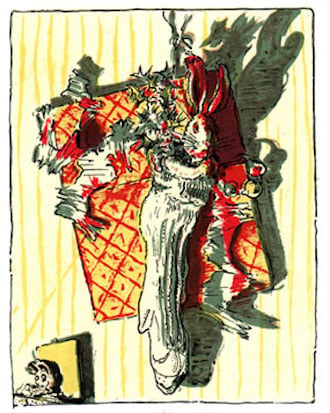 The Velveteen Rabbit is the story of a stuffed toy rabbit who wishes to become real. The title rabbit is a Christmas gift for a child we come to know only as “the Boy.” The book begins:

“There was once a velveteen rabbit, and in the beginning he was really splendid. He was fat and bunchy, as a rabbit should be; his coat was spotted brown and white, he had real thread whiskers, and his ears were lined with pink sateen. On Christmas morning, when he sat wedged in the top of the Boy’s stocking, with a sprig of holly between his paws. The effect was charming.”

The Boy ignores the velveteen rabbit for a time, preferring to play with fancier, more modern toys.

The oldest toy in the nursery is the Skin Horse, who was passed down by the Boy’s uncle. He tells the rabbit of how toys can become real through the love of the children they belong to.

“The Skin Horse had lived longer in the nursery than any of the others. He was so old that his brown coat was bald in patches and showed the seams underneath, and most of the hairs in his tail had been pulled out to string bead necklaces. He was wise, for he had seen a long succession of mechanical toys arrive to boast and swagger, and by-and-by break their mainsprings and pass away, and he knew that they were only toys, and would never turn into anything else. For nursery magic is very strange and wonderful, and only those playthings that are old and wise and experienced like the Skin Horse understand all about it.” 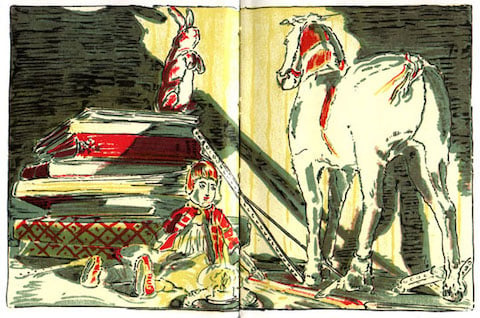 The rabbit fervently wishes to become real through the Boy’s love, yet has some misgivings:

“He longed to become Real, to know what it felt like; and yet the idea of growing shabby and losing his eyes and whiskers was rather sad. He wished that he could become it without these uncomfortable things happening to him.”

It takes some time, but after the Boy takes the velveteen rabbit as sleeping companion one night, he begins to love him at last.

“Weeks passed, and the little Rabbit grew very old and shabby, but the Boy loved him just as much. He loved him so hard that he loved all his whiskers off, and the pink lining to his ears turned grey, and his brown spots faded. He even began to lose his shape, and he scarcely looked like a rabbit any more, except to the Boy. To him he was always beautiful, and that was all that the little Rabbit cared about. He didn’t mind how he looked to other people, because the nursery magic had made him Real, and when you are Real shabbiness doesn’t matter.”

When the Boy contracts scarlet fever, the rabbit says by his side. When the doctor orders a trip to the seaside so the the patient and recover, and at the same time, to disinfect the nursery, all the books and toys are to be burned.

The velveteen rabbit is put into a sack and left outside. A tear falls from his eye as he thinks of the Boy.

“Of what use was it to be loved and lose one’s beauty and become Real if it all ended like this? And a tear, a real tear, trickled down his little shabby velvet nose and fell to the ground.”

When the teardrop touches the ground, a flower springs up at once, and out steps a fairy.

The fairy tells the rabbit that because he had become real to the Boy who loved him so dearly, she would make him real to all the world. In the forest, in view of the other rabbits, the fairy kisses the velveteen rabbit, who becomes a real rabbit — a handsome one, at that — and joins the others.

A few seasons pass, and a spring day finds the Boy playing out in the woods behind the house:

“Autumn passed and Winter, and in the Spring, when the days grew warm and sunny, the Boy went out to play in the wood behind the house. And while he was playing, two rabbits crept out from the bracken and peeped at him. One of them was brown all over, but the other had strange markings under his fur, as though long ago he had been spotted, and the spots still showed through. And about his little soft nose and his round black eyes there was something familiar, so that the Boy thought to himself:
“Why, he looks just like my old Bunny that was lost when I had scarlet fever!”
But he never knew that it really was his own Bunny, come back to look at the child who had first helped him to be Real.”

The Velveteen Rabbit was well received from the time it first came out, becoming a beloved childhood classic and garnering awards and accolades for decades to come. Following is a review that appeared a couple of years after it was published. 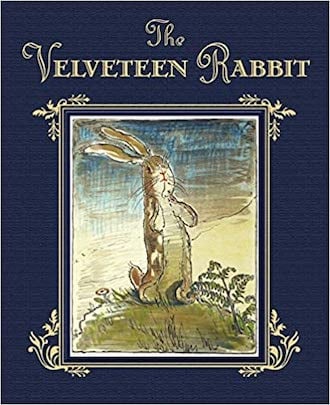 A 1924 review of The Velveteen Rabbit

From the original review in The Birmingham News, Birmingham, AL, April, 1924, by Mary E. Foster: Do you know the velveteen rabbit? He came one Christmas morning with “the Boy’s” other toys; there he “sat wedged in the top of the Boy’s stocking, with a sprig of holly between his paws …”

For many long months he lived in the nursery where the mechanical toys treated him with superior airs, and only the old Skin Horse was kind to him.  They became great friends, and from his years of experience the Skin Horse told the Velveteen Rabbit of life and how a toy could become “real.”

The Skin Horse had been made “real” because the Boy’s uncle had loved him many years ago and one day the Rabbit asked him:

“What is real, does it mean having things that buzz inside you and a stick-out handle?”
“Real isn’t how you are made,” said the Skin Horse. “It’s a thing that happens to you. When a child loves you for a long, long, time, not just to play with, but really loves you, then you become Real.”
“Does it hurt?” asked the rabbit.
“Sometimes, but when you are real you do not mind being hurt,” said the Skin Horse.
“Does it happen all at once, like being wound up, or bit by bit?”
“It doesn’t happen all at once. You become,” said the Skin Horse. “It takes a long time. That’s why it doesn’t often happen to people who break easily, or have sharp edges, or who have to be carefully kept. Generally by the time you are real, most of your hair has been loved off, and your eyes drop out and you get loose in the joints and very shabby. But these things don’t matter at all, because once you are real you can’t be ugly, except to people who don’t understand.”

What child of five or six (or really, a child of any age) could fail to unconsciously realize what his love for his toys can mean to them after such a story, and what grown-up but will stop to think before they lightly discard some well-worn treasure which to them has served a purpose?

Books like this will be real friends of the children who read them or to whom they are read. Its print is large and its many pictures irresistible. Children of all ages will love the Velveteen Rabbit and the wise Skin Horse to the very end. Picture books can be of things we know every day, told in a delightful way and made “real” through love. 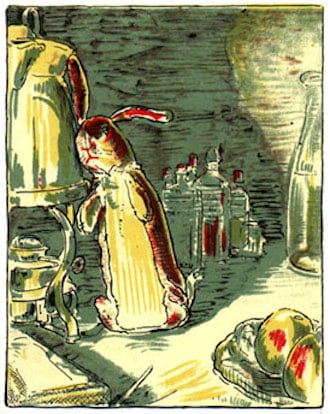 More about The Velveteen Rabbit by Margery Williams

2 Responses to “The Velveteen Rabbit by Margery Williams turns 100”