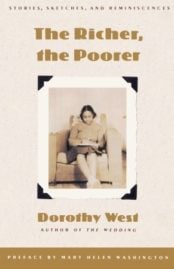 Dorothy West (1907 – 1998) was the last surviving member of the Harlem Renaissance movement of the 1920s. The Richer, The Poorer,  published in 1995, is collection of her short stories and essays spanning nearly seventy years of West’s writing.

Though she didn’t produce a large body of work, West’s writing is admired for its nuanced views of middle and upper middle-class African-American communities and its examinations of gender, class, and social structure.

Her first novel, The Living is Easy (1948), depicts the life of an upper-class black family. It remained her only novel for decades, until The Wedding was published in 1995, the same year that The Richer, The Poorer was published.

Whether in fiction or nonfiction format, West wrote movingly about relationships, marriage and class consciousness through a lens of the American African-American experience. After these 1995 works were published, and after Dorothy West’s death, more of her short works have been collected and published.

The following description is adapted from the 1995 Doubleday edition of The Richer, The Poorer by Dorothy West:

Dorothy West’s masterpiece, The Wedding, lies at one end of the dazzling career whose beginnings have the quality of myth. When West was seventeen, her first short story, “The Typewriter,” won second place in a writing contest, after a story by the much-older Zora Neale Hurston.

Hurston was so impressed by this young prodigy that she took her by the hand and let her into the eye of the storm then raging in Harlem — the circle of Manhattan writers and artists who would collectively come to be known as the Harlem Renaissance.

As a short story writer novelist, and essayist, the choicest fruits of West’s fabled career are offered up for the first time, in The Richer, the Poorer, a luminous collection of stories and autobiographical essays selected and introduced by the author.

The stories contained here are as American as jazz, and as wise and multifaceted as their writer.

Dorothy West’s métier is the unique crucible in which America place is its black middle class, but her themes are universal: the daily misunderstandings between young and old, men and women, rich and poor, that can lead to tragedy; the ways in which bonds of family and community can bring us together, and tear us asunder.

Autobiographical essays of a storied life

Dorothy West’s autobiographical essays explore the poles of her remarkable life — from growing up black and middle class in Boston to her near-mythic trip to Moscow in 1933 with Langston Hughes and other Harlem Renaissance writers, to life on her beloved Martha’s Vineyard.

They cohere into a beautiful and poignant memoir of a singular American life, a memoir that communicates with the short stories and a host of fertile ways. Taken as a whole, The Richer, the Poorer is a triumphant celebration of the life and work one of America’s genuine treasures.

More about The Richer, the Poorer by Dorothy West