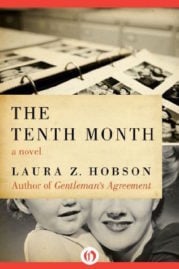 From the 1970 Simon and Schuster edition of The Tenth Month by Laura Z. Hobson:  In her first great best seller, Gentleman’s Agreement, Laura Z. Hobson dealt memorably with the prejudice of antisemitism.

Now, in The Tenth Month, Mrs. Hobson deals with another kind of prejudice — one far more subtle, emotional, and pervasive — the prejudice that society is guilty of when it forces a single  rigid code of morality on all human beings.

The Tenth Month is the story of Theodora Gray, a woman who has been told she can never have children, but now —after ten years of divorce and at the amiable end of one of her infrequent affairs —suddenly discovers that she is pregnant.

Happy to be a single mother, ahead of her time

Dori Gray is not bothered by feelings of shame or self-reproach. She is delighted, and determined to have her baby. But another kind of dilemma poses itself: even before she is certain that she is pregnant, Dori falls in love with Matthew Poole, a lawyer who is married and a devoted father of two children.

Should she tell him she is pregnant by another man? If she tells him, how will he take it? Will Dori become another “problem case,” or will Matthew’s own strength and humanity prevail and let him respect the rightness of her decision to have her child? 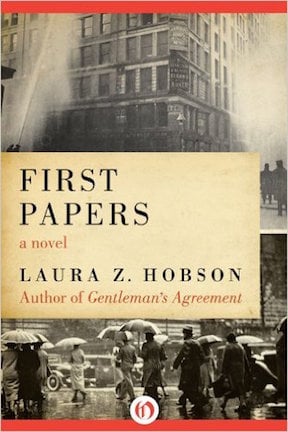 Set in the tumultuous late 1960s

The story takes place in New York, and the year is 1968 — a year filled with riots, violence, and assassinations. Against this backdrop of destruction and death, there is Dori’s pregnancy and the baby’s birth.

The Tenth Month is an unforgettable story, told with remarkable perception and warmth. The acute observation and generosity of feeling that so illuminated Laura Z. Hobson’s Gentleman’s Agreement and First Papers are even more strikingly evident in this novel.

More about The Tenth Month