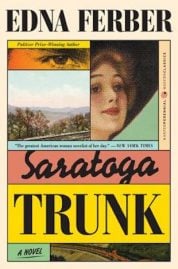 From the 1941 Doubleday, Doran edition: Edna Ferber’s distinguished novels of the American scene, Cimarron, Show Boat, So Big, and many others, she one special quality — they display at once he glamor and the strength of this country, and of the people who built it.

Saratoga Trunk is no exception. Its background, New Orleans and Saratoga in the eighteen eighties is one of the most picturesque America has produced, but the theme behind the romance between Clint Maroon and Clio Dulling is that of the railroad builders, the men who flung across the land the roads of steel which united it, and toward that end were careless of the means they used.

Clint Maroon was a magnificent Texan whose father had been ruined by the railroads. He knew their ruthlessness; he had enough imagination to sense their future. He was to become rich, fabulous, the greatest railroader America had ever known.

Clio Dulaine was the daughter of a New Orleans aristocrat and his French mistress. She grew up in Paris, brooding over the wrongs done her mother, and returned New Orleans as a young woman to avenge them.

She reopened the little house in Rampart Street and set about coping with the enmity of her father’s kin. There she might have remained, becoming herself a legend, had not her ways in a moment of inexplicable chance crossed those of Clint Maroon.

She, with cold clear-sightedness, wanted to achieve not only her revenge, but wealth also. Clint had his revenge to find, too, and he too sought power and wealth. 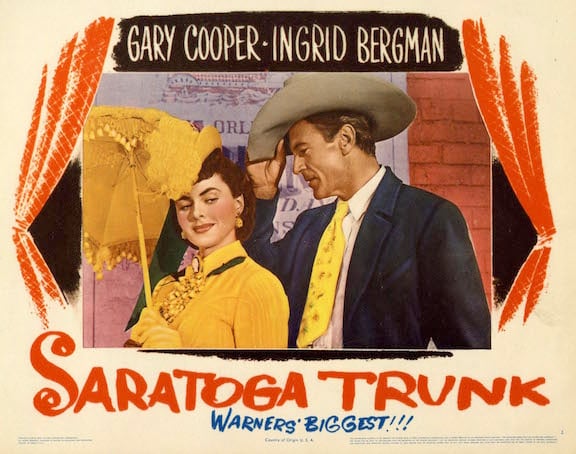 The film version of Saratoga Trunk came out in 1945

Together, behind the closed jalousies of an old New Orleans house, they formed their plans. There was one town in America in its season lusher and more overripe with fashion and money than any other in the country — Saratoga, the town of spas and horses, where the fashionable world congregated.

There they decided to go, tow adventurers in search of their careers; Clio would be a noblewoman, the beautiful Countess De Chanfret; Clint would become Colonel Maroon the inexhaustibly rich gentleman gambler of the West.

So begins the story of Saratoga Trunk. Not even Show Boat has the color, the light, and the vividness of these glowing pages. But behind the romance and the glitter lies a deeper significance, for this is the story of two people in love at the turn of the century, and it is also the story of a way of life and of a breed of men who held helpless a continent in thrall, and who only today are beginning to return their spoils to the people.

Full of memorable characters, of the plush and iron of our fateful past, this is Edna Ferber’s richest and most satisfying novel.

Saratoga Trunk by Edna Ferber is also available on Amazon*

One Response to “Saratoga Trunk by Edna Ferber (1941)”