Onions in the Stew by Betty MacDonald 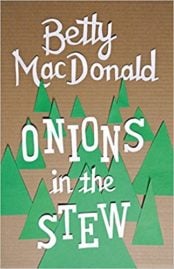 Onions in the Stew by Betty MacDonald (1954) is a humorous memoir about the author’s life in Washington State with her family. The events described in this narrative take place from 1942 to 1954.

Betty, a divorced working mother, lives with her two preteen daughters in her mother’s home. After she meets and marries Donald MacDonald, they find it difficult to find one in Seattle or its suburbs, and finally settle on a property on nearby Vashon Island.

The tale follows the familiar trope of city folks finding themselves in way over their heads when moving to the country, and all the little disasters that follow when buying a house that turns out to be a money pit.

In the hands of Betty MacDonald, who made her name with the first of her series of memoirs, The Egg and I (1945), it all becomes wryly good-natured fun. The title comes from a poem by Charles Divine:

“Some said it was Bohemia, this little haunt we knew
When hearts were high and fortunes low, and onions in the stew.”

Here’s a description of the book by John P. Marquand for Book of the Month Club News, provided when the book was released in 1955:

Anyone who can write with genuine joy, gusto, and enthusiasm regarding the vicissitudes of home, husband, dogs, and children commands an enormous audience. This of course has been the deserved good fortune of Betty MacDonald ever since The Egg and I appeared in 1945. She is a girl who seems to enjoy every moment of living, not matter how or where.

She has coped with red-ink budgets, balky plumbing, and nothing in the kitchen but noodles. She has lived through dog fights, measles, and all the usual and unusual cataclysms of nature. But even when domestic morale has sunk to the bottom of the barrel, she and everyone around her have had a wonderful time.

Because of her ability to tell a good story, this joie de vivre is communicated to all who read her pages. Her latest book, in my opinion, her best to date.

Onions in the Stew is a homely title, but then it is a homely book, brimming over with incidents of everyday life — some of which we have experienced ourselves, others which Betty MacDonald enables us to live vicariously and with unalloyed delight. 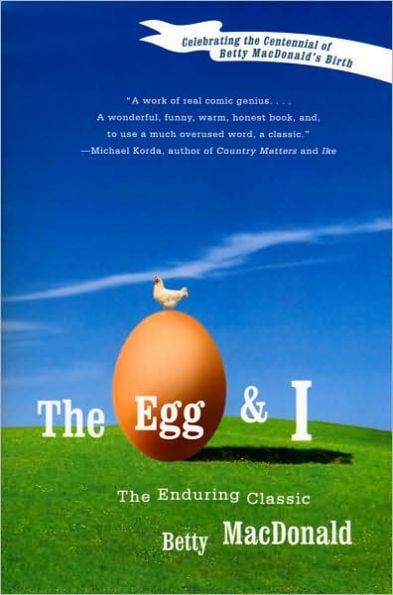 City folks on the frontier

Onions in the Stew is a saga of domestic life on Vashon Island, which lies in Puget Sound within commuting distance of the city of Seattle, Washington. If one thinks that Vashon Island — complete with Betty MacDonald, her husband Don, her daughters Anne and Josh, and the family dog Tudor — resembles anything in New York Harbor, they are in error.

The American Northwest is still a land of rugged plenty that has not lost all its frontier quality. Its Douglas fir trees are not lumbered out yet; its shores are washed by the marrow-chilling North Pacific; its forests and farm lands are watered by almost constant winter rainfall.

Mount Rainier, when you can see it through the rainclouds, broods over a world of plenty; and a perpetual conflict between nature and human encroachment  lends life there a comedy value which only Betty MacDonald so far has been able to interpret.

She knows that you can never tell exactly what nature may do in the vicinity of Seattle. Plant a sapling on your front lawn and almost overnight it becomes a giant.

If you are not careful with vines and shrubbery, they smother your house while your back is turned. Small fruits, particularly berries, grow in such lavish profusion that they threaten with nervous breakdown.

Deer and raccoon wander vaguely over lawns and gardens, and on the beaches are peculiar shellfish, including a clam-like creature known as a geoduck that can move through sand with the speed of an express train. 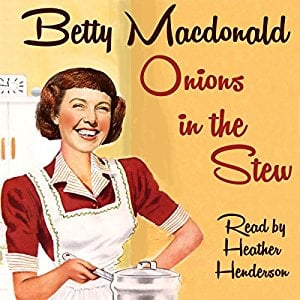 Ludicrous details of keeping a home

Vashon Island is inhabited by many friendly and interesting neighbors; the MacDonald House can only be reached by beach or by trail; and the whole area seems to abound in dogs, all of who appear to have incurred the intense dislike of Tudor.

Seeing these phenomena through the eyes of Mrs. MacDonald causes one to grow wiser in the ways of the Northwest — but never sadder. No one can tell a better story than she when it involves the ludicrous details that go into keeping a home together.

It is impossible to forget the MacDonald’s pursuit of the washing machine which they thought was resting safely in a rowboat near their sea wall, or Tudor’s classic fight with one of his bitterest enemies, or the family’s capture of a geoduck. The variety of the MacDonald life is as abundant as Betty MacDonald’s good nature.

Aside from being consistently entertained, readers of Onions in the Stew will also gain a strong sense of inner satisfaction … it teaches us that happiness can flourish in very unexpected quarters as long as it is nourished by comradeship and love and humor, and that for some of us, at any rate, a lot is still right in the world.

— review by John P. Marquand for Book of the Month Club News

How Onions in the Stew by Betty MacDonald Begins …

Chapter 1: No money and no furniture

For twelve years we MacDonalds have been living on an island in Puget Sound. There is no getting away from it, life on an island is different from life in the St. Francis Hotel but you can get used to it, can even grow to like it.

“C’est la guerre,” we used to say looking wistfully toward the lights of the big comfortable warm city just across the way. Now, as November (or July) settles around the house like a wet sponge, we say placidly to each other, “I love it here. I wouldn’t live anywhere else.”

I cannot say that everyone should live as we do, but you might be happy on an island if you can face up to the following:

1.  Dinner guests are often still with you seven days, weeks, months later and slipping in the lawn swing is fun (I keep telling Don) if you take two sleeping pills and remember that the raccoons are just trying to be friends.

2.  Any definite appointment, such as childbirth or jury duty, acts as an automatic signal for the ferryboats to stop running.

3.  Finding island property is easy, especially up here in the Northwest where most of the time even the people are completely surrounded by water. Financing is something else again. Bankers are urban and everything not visible from a bank is “too far out.”

4.  A telephone call from a relative beginning “Hello dear, we’ve been thinking of you …” means you are going to get somebody’s children.

5.  Any dinner can be stretched by the addition of noodles to something.

6.  If you miss the last ferry — the 1:05 A.M. — you have to sit on the dock all night, but the time will come when you will be grateful for that large body of water between you and those thirteen parking tickets.

7.  Anyone contemplating island dwelling must be physically strong and it is an added advantage if you aren’t too bright. 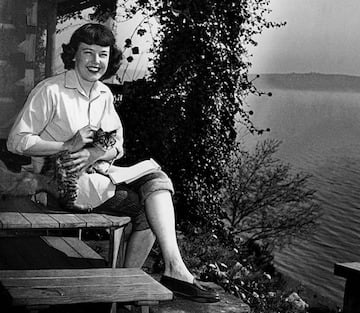