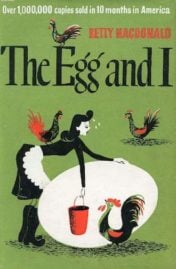 The Egg and I  by Betty MacDonald (1946) is the book that put this author of humorous fiction and nonfiction on the map.

Not only did the book become a world-wide bestseller, the film version starring Claudette Colbert and Fred MacMurray was hugely popular as well.

While many contemporary readers still adore the book, others are deeply disturbed by its blatant racism against Native Americans as well as its classism and snobbery toward those the author describes as Neighbors with a purposeful capital.

In fact, following the book’s publication, lawsuits against the author were filed by the Chimacum community. Those who have read The Egg and I, we’d love to hear your comments on how this book reads with a contemporary view.

A 1946 review of The Egg and I by Betty MacDonald

From the original review in the Valley Morning Star (TX), January 1946: The Egg and I  by Betty MacDonald is the funniest best-seller to top the nonfiction list in many seasons.

It is largely the story of life on a wilderness farm-chicken ranch, while the first two chapters give an account of Miss MacDonald’s harum-scarum childhood.

Life begins, however, for the newly-married Betty when she and her young husband, Bob, buy a little “place in the country” — a euphemism for a cabin in the Olympic Mountains, Washington. They carry all of their water (or rather, Betty drags it) in buckets from a well in the orchard.

No conveniences, too many tools

There are no “conveniences,” no near neighbors, no mailman, no radio, but there is a lot of hard work. Singlehanded, they build their own chicken houses, brooder, and what-nots, although Betty is completely foreign to such instruments of torture as hammers, saws, chisels, etc.

Betty and Bob construct all the necessary gadgets for the chickens before Bob will allow anything to be done for the house.

They have a wood stove, a monster so essential to the rudiments of comfort, and so contrary as to possess a personality of its own, that Betty refers to it in capitals as “Stove.” 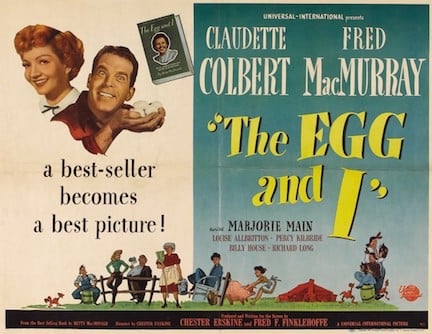 Although as a child Betty had sentimentally thought of chickens as sweet, fluffy little creatures, she soon finds out that in the hundreds they lose all semblance of sweetness and become silly, peeping, insect-and-disease attracting, attention-demanding, little nightmares.

Furthermore, they grow up to be stupid, frightening old hens who peck one’s wrists when one timidly reaches under them for eggs.

Betty learns to hate even baby chicks, and although she writes with high good humor, and one laughs with her at the vicissitudes of the poultry business, no on will want to rush out and buy a chicken ranch after reading this book!

In fact, those countless romantics who dream of a farm and “rusticity” should read The Egg and I before plunging their hard-earned dollars. Betty MacDonald makes it seem funny, on the surface, but it was still a hard, pioneer existence. 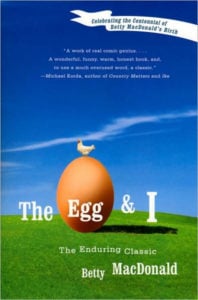 Her few and distant Neighbors (also in capitals) are as amusing and annoying as the chickens. On one side are the Kettles, a hand-to-mouth, lazy, fun-loving family who are always borrowing things.

On the other side are the Hicks, who are too painfully immaculate and germ-fearing to inspire warm affection. Mrs. Hicks is the Perfect Housewife, and leads such a constant Lysol crusade that her own husband regards her as a cross between Mary Magdalene and the County Agents.

Just when the MacDonalds have turned their bit of wilderness into a rough facsimile of civilization, Bob decided to sell the place and buy a chicken ranch in Seattle!

The reader heaves a sigh of relief for Betty, but wants to shake her lord and master for not having bought the ranch in Seattle in the first place, thereby saving his young wife much hardship. However, it would have prevented her from having the very experiences that make The Egg and I such delightful entertainment.

Only a person of intelligence, strength of character, and above all, an unconquerable sense of humor, could have survived such a life, to turn her troubles into hilarious laughs, instead of becoming bitter. The Egg and I is witty, wise, pathetic, funny, and human.