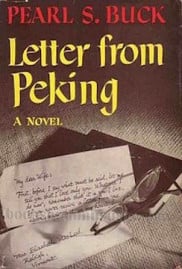 From the 1957 John Day Company edition:  Pearl S. Buck‘s Letter from Peking is a tender and suspenseful story of love in a world split apart, love struggling against the barriers of race, politics, distance, and misunderstanding. This time is modern, the setting Vermont, with flashbacks to China.

The protagonist, Elizabeth, as an American woman whose husband Gerald, half Chinese, has elected to stay in Peking under communism while she returns to live in America. The counterpoint to their continuing love is the search of their quarter-Chinese son Rennie, who has just reached manhood, for a love that will yield happiness instead of the frustration his parents reaped.

Around them move the others who make up their world: Gerald’s father, a Scotsman from Virginia who began it all by marrying a Chinese wife and for whom Elizabeth is now caring in his last years; the good Chinese woman who in Elizabeth’s absence, and with her permission, becomes Gerald’s “temporary wife”; the Vermonter who is Elizabeth’s caretaker, and his wife who has borne him seven children, each the fruit of a quarrel; the bachelor doctor who seeks to end Elizabeth’s loneliness; the family of summer residents whose daughter is Rennie’s first sweetheart. 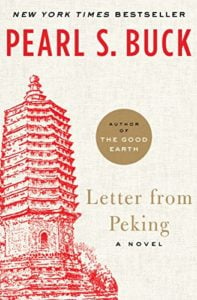 Letter from Peking by Pearl S. Buck  on Amazon

In this short novel are distilled many of the things that Pearl Buck feels most strongly about: the continuity of family and the grip of one’s roots in nation and locality; the good and the bad that life holds for persons of mixed blood; the beauty of China and its civilization, and what has happened to these under communism; the different, wild beauty of Vermont; the transcending power of love when it is deep and mutual. 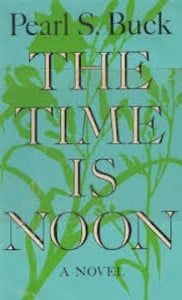 More information on Letter from Peking