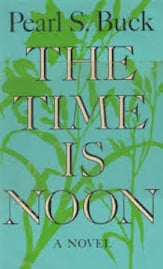 From the 1966 John Day edition: The Time is Noon by Pearl S. Buck is the richly hued portrait of a woman as a daughter, sister, wife, and mother. It is the story of Joan Richards in quest of herself as she grows into womanhood in an American town, between the two world wars.

As a girl she shields her individuality not only from the world but from herself, behind the protective walls of a mother’s love, of home and family. But the family slips away, first one, then another, and slowly Joan discovers that the walls of home are but a shell.

She seeks another haven in marriage, moving in with her husband Bart’s family, but this is more like a prison. She places her hopes in motherhood, but her child as the months pass becomes a riddle and then a source of grief.

At last from the depths of her despair Joan breaks loose. Taking stock of herself and her life, she turns to those who really need her rather than she them. When the story leaves her, still young but at last an individual in control of her own life, she is uncertain what lies ahead but she an we know that “the day is still at noon.” 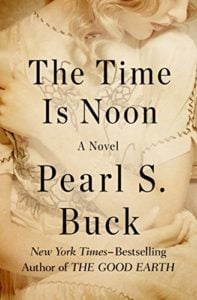