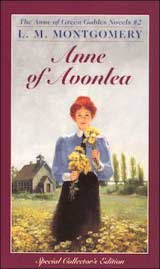 From the the 1940 edition (Grossett & Dunlap) of the 1909 sequel to Anne of Green Gables:  “A tall, slim girl, ‘half-past sixteen’ with serious grey eyes and hair which her friends called auburn, had sat down on the broad red sandstone doorstep of a Prince Edward Island farmhouse …”

So began this gentle and much-loved sequel to Anne of Green Gables by L.M. Montgomery. Five years have passed since the orphan girl Anne Shirley came to the childless home of siblings Marilla and Matthew Cuthbert, bringing with her all of the joy and love of her generous nature.

She has come back to Avonlea to teach school in the same village school where she herself was taught. Teaching in neighboring village schools are her friends Diana Berry, Jane Andrews, Priscilla Gray, and Gilbert Blythe.

To the original cast of characters must be added the mysterious new neighbor in the Bell farmhouse and his parrot, Ginger. Then there are the mischievous but adorable Keith twins, Davy and Dora, whom Marilla has adopted. Not to be forgotten is the gentle Miss Lavender who has waited twenty-five long years for her beloved Stephen Irving to return.

The last chapter of this appealing story brings a hint of romance to come as Anne and Gilbert stand in the shadows of the stone house garden where a little while before, Miss Lavender had been married. 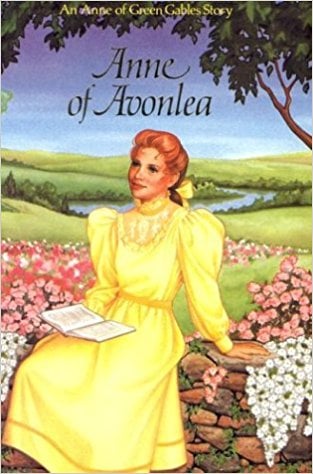 Quotes from Anne of Avonlea

“I believe the nicest and sweetest days are not those on which anything very splendid or wonderful or exciting happens but just those that bring simple little pleasures, following one another softly, like pearls slipping off a string.”

“One can’t get over the habit of being a little girl all at once.”

“Having adventures comes natural to some people”, said Anne serenely. “You just have a gift for them or you haven’t.”

“I think,” concluded Anne, hitting on a very vital truth, “that we always love best the people who need us.’”

“Oh, of course there’s a risk in marrying anybody, but, when it’s all said and done, there’s many a worse thing than a husband.”

“Well, we all make mistakes, dear, so just put it behind you. We should regret our mistakes and learn from them, but never carry them forward into the future with us.”

“I’m so thankful for friendship. It beautifies life so much.” 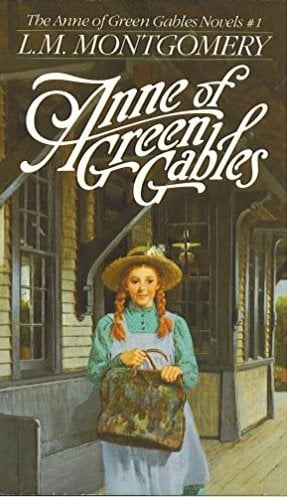 More about Anne of Avonlea by L.M. Montgomery