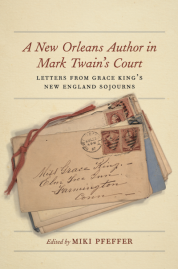 Richard Watson Gilder of Century Magazine challenged King to write her first short story, and Charles Dudley Warner placed it and then mentored her into the publishing world.

Over almost five decades, King wrote short stories and novellas, biographies and histories, genealogy, and a memoir. Her path reflected the shifting changes in taste. As with other women writers whose works disappeared from the literary canon, she is again receiving attention for her sensitivity and knowledge of a particular time and place.

Her subjects were post-Reconstruction New Orleanians, especially women, forced to reinvent themselves after a great loss for which they were ill prepared.

King’s father had been a successful attorney; she and six siblings were well educated in French Creole schools. At an impressionable ten years old when Union troops captured New Orleans, she and her family left the city until after the Civil War.

She never fully recovered from having expected a genteel life but inheriting a struggling one, especially after her father’s death in 1881. She and two sisters and a brother remained unmarried until their deaths.

Her determination to regain family status drove her literary career and genre choices. As a historian, researcher, genealogist, and independent businessperson, she was a woman before her time. As a writer of sensuous, ironic, and illuminating fiction, she fashioned stories that can reward readers who seek them out. 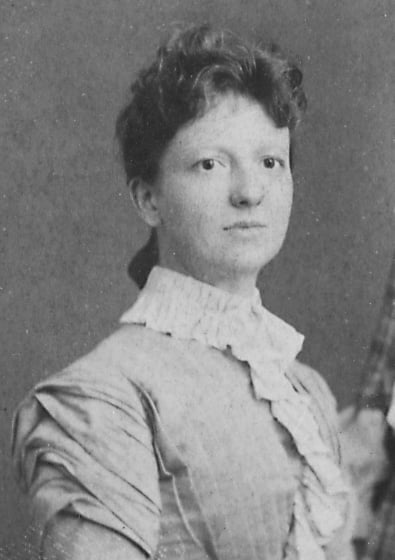 Shortly after Grace King wrote her first stories in post-Reconstruction New Orleans, she entered a world of famous figures and literary giants greater than she could ever have imagined. Notable writers and publishers of the Northeast bolstered her career, and she began a decades-long friendship with Mark Twain and his family that was as unlikely as it was remarkable.

As compelling as a novel, this audacious story of King’s northern ties unfolds in eloquent letters. They hint at the fictional themes that would end up in her own art; they trace her development from literary novice to sophisticated businesswoman who leverages her own independence and success.

Through excerpts from scores of new transcriptions, as well as contextualizing narrative and annotations, Miki Pfeffer weaves a cultural tapestry that includes King’s volatile southern family as it struggles to reclaim antebellum status and a Gilded Age northern community that ignores inevitable change.

King’s correspondence with the Clemens family reveals incomparable affection. As a regular guest in their household, she quickly distinguished “Mark,” the rowdy public persona, from “Mr. Clemens,” the loving husband of Livy and father of Susy, Clara, and Jean, all of whom King came to know intimately.

In one letter, she wrote: “— coming home we met Mark Twain–he walked along with us — and kept me giggling all the time. He talks just as he writes.”

Their unguarded, casual revelations of heartbreaks and joys tell something more than the usual Twain lore, and they bring King into sharper focus. All of their existing letters are gathered here, many published for the first time.

Miki Pfeffer is a visiting scholar at Nicholls State University and the author of the award-winning Southern Ladies and Suffragists: Julia Ward Howe and Women’s Rights at the 1884 New Orleans World’s Fair. 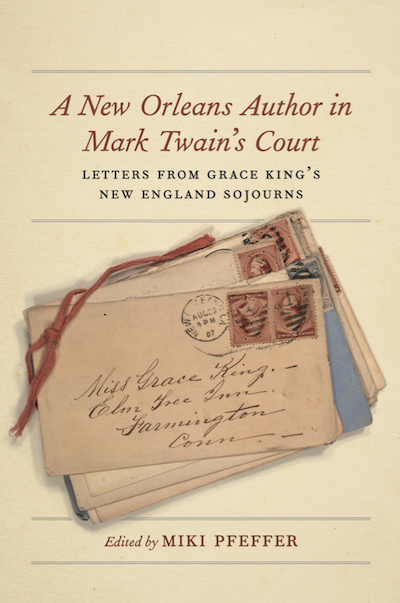 At the age of thirty-three, Grace King had little reason to expect to begin a literary career or to be welcomed into a circle of famous writers and respected publishers. In 1885, she was simply a disgruntled eldest sister with an urge for freedom but few prospects to achieve it, a relative drudge who spent her energies managing the house for an eccentric family and yearning to escape their incessant rebellions.

The center of the seven Kings was their mother, Mimi, whom Grace publicly called “a charming raconteuse, witty, and inexhaustible in speech” who “turned every episode of her life into a good and colorful story” but privately termed her “an ambitious woman, determined to surpass every one, & succeeding.”

Grace most often bemoaned her life en famille in uninhibited letters to her intime May, the only sister who escaped the erratic household when she married in early 1884 and moved to North Carolina. She labeled older brothers Fred and Branch unsympathetic, demanding, and disagreeable; and unmarried sisters Nan and Nina, lackadaisical and argumentative, “like unreliable watches, always running down or stopping and never giving the correct time of day.”

Nan she pictured as “utterly ignoring any social or domestic duties,” and Nina as “lying in bed with malaria — half the day — doing fancy work the other half.” Lastly, she saw her youngest brother, Will, as unrealistic and grandiose rather than responsible and contributing.

Exacerbating the turmoil, money was always scarce and penny-pinching was commonplace as the older brothers tried to provide for the genteel family, as expected (their father had died in 1881). Grace craved a life apart.