Romantic Quotes from The Price of Salt 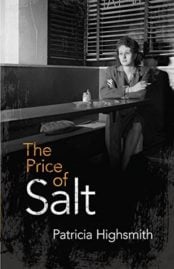 Patricia Highsmith wrote novels and short stories that had elements of crime and which could be described as psychological thrillers. Until her first novel, Strangers on a Train  was published in 1950, Highsmith worked as a freelance scriptwriter. The following year it was made into the famous Hitchcock film of the same name.

Highsmith was bisexual and broke from what would become her favored genre of thrillers to produce a breakthrough novel about two women falling in love. The Price of Salt (1952) would become the basis of the film adaptation, Carol, several decades later (2015), starring Cate Blanchett in the title role, with Rooney Mara as her young love interest.

Highsmith had a dim view of humanity and was often described as a misanthrope. The following romantic quotes from The Price of Salt reveal that Highsmith had a softer side.

“What was it to love someone, what was love exactly, and why did it end or not end? Those were the real questions, and who could answer them?”

“But there was not a moment when she did not see Carol in her mind, and all she saw, she seemed to see through Carol. That evening, the dark flat streets of New York, the tomorrow of work, the milk bottle dropped and broken in her sink, became unimportant. She flung herself on her bed and drew a line with a pencil on a piece of paper. And another line, carefully, and another. A world was born around her, like a bright forest with a million shimmering leaves.”

“Then Carol slipped her arm under her neck, and all the length of their bodies touched fitting as if something had prearranged it. Happiness was like a green vine spreading through her, stretching fine tendrils, bearing flowers through her flesh. She had a vision of a pale white flower, shimmering as if seen in darkness, or through water. Why did people talk of heaven, she wondered.” 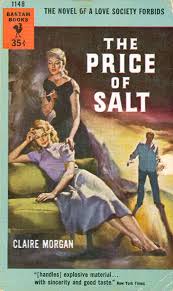 An original 1952 review of The Price of Salt

“Perhaps it was freedom itself that choked her.”

“I think people often try to find through sex things that are much easier to find in other ways.”

“Happiness was like a green vine spreading through her, stretching fine tendrils, bearing flowers through her flesh.”

“I feel I stand in a desert with my hands outstretched, and you are raining down upon me.”

“Was it love or wasn’t it that she felt for Carol? And how absurd it was that she didn’t even know. She had heard about girls falling in love, and she knew what kind of people they were and what they looked like. Neither she nor Carol looked like that. Yet the way she felt about Carol passed all the tests for love and fitted all the descriptions.” 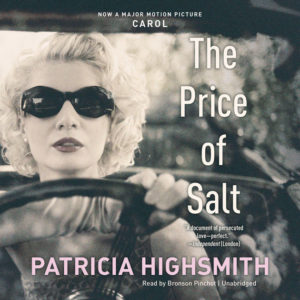 The Price of Salt on Amazon

“She thought of people she had seen holding hands in movies, and why shouldn’t she and Carol?”

“What I mean about affinities is true from friendships down to even the accidental glance at someone on the street-there’s always a definite reason somewhere. I think even the poets would agree with me.”

“Carol raised her hand slowly and brushed her hair back, once on either side, and Therese smiled because the gesture was Carol, and it was Carol she loved and would always love. Oh, in a different way now because she was a different person, and it was like meeting Carol all over again, but it was still Carol and no one else. It would be Carol, in a thousand cities, a thousand houses, in foreign lands where they would go together, in heaven and in hell.” 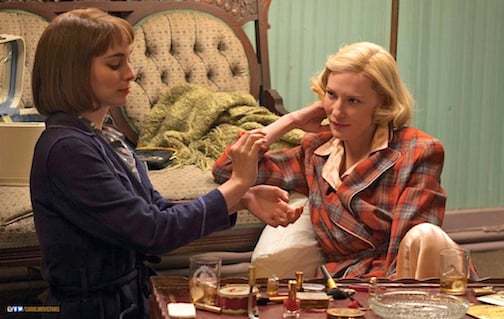 “’Do people always fall in love with things they can’t have?’
‘Always,’ Carol said, smiling, too.”

“And she did not have to ask if this was right, no one had to tell her, because this could not have been more right or perfect.”

“At any rate, Therese thought, she was happier than she ever had been before. And why worry about defining everything?”

“I’d had a little feeling of destiny. Because, you see, what I mean about affinities is true from friendships down to even the accidental glance at someone on the street-there’s always a definite reason somewhere. I think even the poets would agree with me.”

“What else mattered except being with Carol, anywhere, anyhow?”