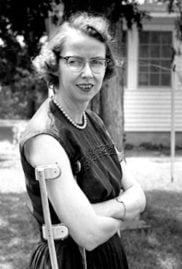 Flannery O’Connor (1925 – 1964) was best known for her short stories that were in the genre of Southern Gothic. She enjoyed imparting wisdom on her craft, as you’ll find in the following selection of Flannery O’Connor quotes on writing and literature.

Despite poor health she wrote every day, eventually producing two novels and more than thirty short stories in an all-too-brief life. She always stood somewhat apart, an observer; there was nothing she wanted to do other than write.

At the age of 24, she was ready to begin her writing career in earnest and produced iconic stories like A Good Man is Hard to Find. She had a lot to say about the writing life, which you’ll find ahead. She was only 39 when she died.

“People without hope not only don’t write novels, but what is more to the point, they don’t read them.”

“The writer should never be ashamed of staring. There is nothing that does not require his attention.”

“Fiction is about everything human and we are made out of dust, and if you scorn getting yourself dusty, then you shouldn’t try to write fiction. It’s not a grand enough job for you.”

“There is something in us, as storytellers and as listeners to stories, that demands the redemptive act, that demands that what falls at least be offered the chance to be restored. The reader of today looks for this motion, and rightly so, but what he has forgotten is the cost of it.
His sense of evil is diluted or lacking altogether, and so he has forgotten the price of restoration. When he reads a novel, he wants either his sense tormented or his spirits raised. He wants to be transported, instantly, either to mock damnation or a mock innocence.” (Mystery and Manners: Occasional Prose, 1970)

“I find that most people know what a story is until they sit down to write one.”

“Most of us have learned to be dispassionate about evil, to look it in the face and find, as often as not, our own grinning reflections with which we do not argue, but good is another matter. Few have stared at that long enough to accept that its face too is grotesque, that in us the good is something under construction.
The modes of evil usually receive worthy expression. The modes of good have to be satisfied with a cliche or a smoothing down that will soften their real look.” 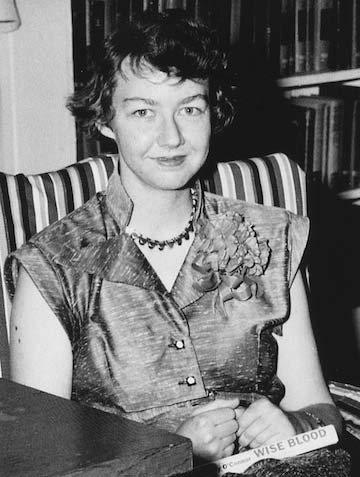 “I don’t think literature would be possible in a determined world. We might go through the motions but the heart would be out of it. Nobody could then ‘smile darkly and ignore the howls.’  Even if there were no Church to teach me this, writing two novels would do it. I think the more you write, the less inclined you will be to rely on theories like determinism. Mystery isn’t something that is gradually evaporating. It grows along with knowledge.” (The Habit of Being: Letters of Flannery O’Connor, 1978)

“I write because I don’t know what I think until I read what I say.”

“All my stories are about the action of grace on a character who is not very willing to support it, but most people think of these stories as hard, hopeless and brutal.” (A Good Man is Hard to Find: And Other Stories, 1955)

“It seems that the fiction writer has a revolting attachment to the poor, for even when he writes about the rich, he is more concerned with what they lack than with what they have.”

“The writer operates at a peculiar crossroads where time and place and eternity somehow meet. His problem is to find that location.” 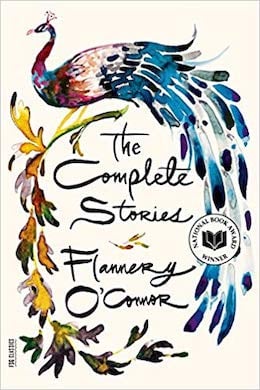 “I have found, in short, from reading my own writing, that my subject in fiction is the action of grace in territory largely held by the devil. I have also found that what I write is read by an audience which puts little stock either in grace or the devil. You discover your audience at the same time and in the same way that you discover your subject, but it is an added blow.” (Mystery and Manners: Occasional Prose, 1970)

“A story is a way to say something that can’t be said any other way, and it takes every word in the story to say what the meaning is.”

“When a book leaves your hands, it belongs to God. He may use it to save a few souls or to try a few others, but I think that for the writer to worry is to take over God’s business.”

“Writing a novel is a terrible experience, during which the hair often falls out and the teeth decay. I’m always irritated by people who imply that writing fiction is an escape from reality. It is a plunge into reality and it’s very shocking to the system.” 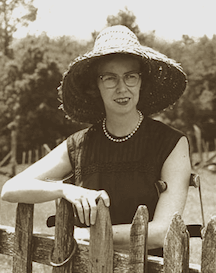 “There is no excuse for anyone to write fiction for public consumption unless he has been called to do so by the presence of a gift. It is the nature of fiction not to be good for much unless it is good in itself.” (Mystery and Manners: Occasional Prose, 1970)

“Everywhere I go, I’m asked if I think the universities stifle writers. My opinion is that they don’t stifle enough of them. There’s many a best seller that could have been prevented by a good teacher.”

“I write to discover what I know.”

“I don’t deserve any credit for turning the other cheek as my tongue is always in it.”

“There is something in us, as storytellers and as listeners to stories, that demands the redemptive act, that demands that what falls at least be offered the chance to be restored. The reader of today looks for this motion, and rightly so, but what he has forgotten is the cost of it.”

3 Responses to “Flannery O’Connor Quotes on Writing and Literature”