Duty and Desire: Quotes from The Age of Innocence by Edith Wharton 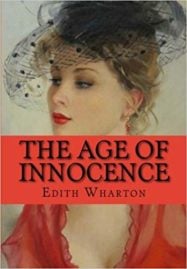 In 1921, it earned Wharton the distinction as the first woman to win the Pulitzer Prize for fiction. In a 2019 essay in The New York Times, “The Age of The Age of Innocence,” Elif Batuman  argued that  in some ways, this classic novel feels more current than ever.

The story is set in the 1870s and centers on Newland Archer, an upper-class New Yorker. Archer’s conflicted desires between duty to his staid but loving wife and his passion for scandal-plagued divorcée Countess Ellen Olenska are central to the narrative.

The overarching conflict explored by the novel is the extent to which an individual should allow the rules of society to overrule what the heart desires.

A reflection of Wharton’s privileged world

The story’s setting reflects the world of wealth and privilege in which Edith Wharton grew up. Despite all the advantages that she shared with her fictional characters, neither she nor they were spared from heartache and love affairs gone wrong. An original 1920 review expressed the nearly universal praise for this novel:

“With deft and certain touch Mrs. Wharton builds her sort around the society of the day, showing the absolutely artificial lives led by its members, their abject submission to rules and restriction prescribed by convention, and their distrust of, and hostility to, such of their people as evinced any desire for freedom of thought or action.”

Much of the novel delves into Archer’s personal conflict between duty to marital vows and the desires of his heart.

“With a shiver of foreboding he saw his marriage becoming what most of the other marriages about him were: a dull association of material and social interests held together by ignorance on the one side and hypocrisy on the other.”

“He took refuge in the comforting platitude that the first six months were always the most difficult in marriage. ‘After that I suppose we shall have pretty nearly finished rubbing off each other’s angles,’ he reflected; but the worst of it was that May’s pressure was already bearing on the very angles whose sharpness he most wanted to keep.”

“The real loneliness is living among all these kind people who only ask one to pretend!”

“He had married (as most young men did) because he had met a perfectly charming girl at the moment when a series of rather aimless sentimental adventures were ending in premature disgust; and she had represented peace, stability, comradeship, and the steadying sense of an unescapable duty.” 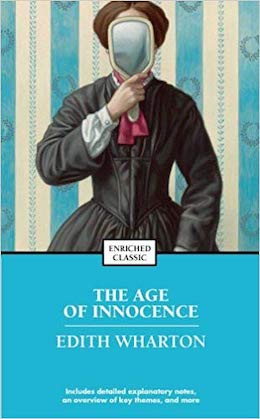 “I swear I only want to hear about you, to know what you’ve been doing. It’s a hundred years since we’ve met-it may be another hundred before we meet again.”

“We can’t behave like people in novels, though, can we?”

“Once more it was borne in on him that marriage was not the safe anchorage he had been taught to think, but a voyage on uncharted seas.”

“The worst of doing one’s duty was that it apparently unfitted one for doing anything else.”

“The persons of their world lived in an atmosphere of faint implications and pale delicacies, and the fact that he and she understood each other without a word seemed to the young man to bring them nearer than any explanation would have done.”

“The young man felt that his fate was sealed: for the rest of his life he would go up every evening between the cast-iron railings of that greenish-yellow doorstep, and pass through a Pompeian vestibule into a hall with a wainscoting of varnished yellow wood. But beyond that his imagination could not travel.”

“To the general relief, the Countess Olenska was not present in her grandmother’s drawing-room . . . it spared them the embarrassment of her presence, and the faint shadow that her unhappy past might seem to shed on their radiant future.”

“Ah, good conversation – there’s nothing like it, is there? The air of ideas is the only air worth breathing.” 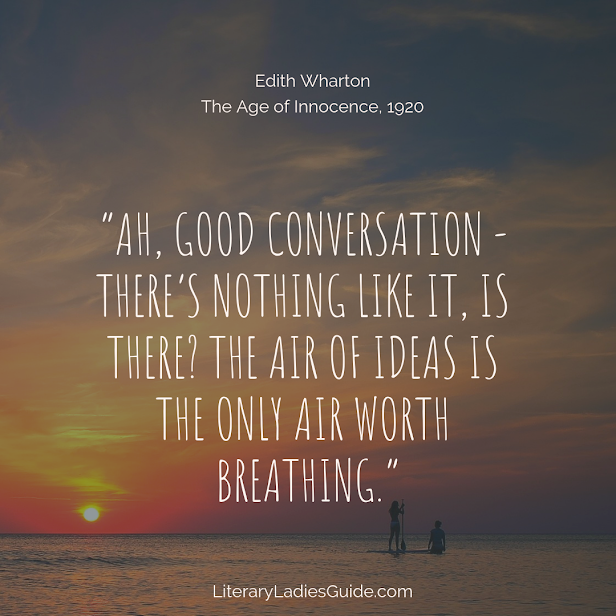 “In reality they all lived in a kind of hieroglyphic world, where the real thing was never said or done or even thought, but only represented by a set of arbitrary signs.”

“His whole future seemed suddenly to be unrolled before him; and passing down its endless emptiness he saw the dwindling figure of a man to whom nothing was ever to happen.”

“The longing was with him day and night, an incessant undefinable craving, like the sudden whim of a sick man for food and drink once tasted and long since forgotten. . . He simply felt that if he could carry away the vision of the spot of earth she walked on, and the way the sky and sea enclosed it, the rest of the world might seem less empty.”

“But after a moment a sense of waste and ruin overcame him. There they were, close together and safe and shut in; yet so chained to their separate destinies that they might as well been half the world apart.”

“Women ought to be free — as free as we are,’ he declared, making a discovery of which he was too irritated to measure the terrific consequences.” 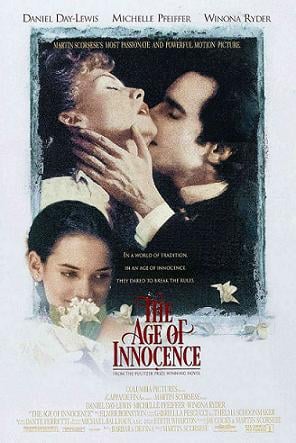 “His own exclamation: ‘Women should be free—as free as we are,’ struck to the root of a problem that it was agreed in his world to regard as nonexistent. ‘Nice’ women, however wronged, would never claim the kind of freedom he meant, and generous-minded men like himself were therefore—in the heat of argument—the more chivalrously ready to concede it to them.

Such verbal generosities were in fact only a humbugging disguise of the inexorable conventions that tied things together and bound people down to the old pattern.”

“He had known the love that is fed on caresses and feeds them; but this passion that was closer than his bones was not to be superficially satisfied.”

“He had built up within himself a kind of sanctuary in which she throned among his secret thoughts and longings. Little by little it became the scene of his real life, of his only rational activities; thither he brought the books he read, the ideas and feelings which nourished him, his judgments and his visions.

Outside it, in the scene of his actual life, he moved with a growing sense of unreality and insufficiency, blundering against familiar prejudices and traditional points of view as an absent-minded man goes on bumping into the furniture of his own room.”

“I shan’t be lonely now. I was lonely; I was afraid. But the emptiness and the darkness are gone; when I turn back into myself now I’m like a child going at night into a room where there’s always a light.”

“And you’ll sit beside me, and we’ll look, not at visions, but at realities.”

“He simply felt that if he could carry away the vision of the spot of earth she walked on, and the way the sky and sea enclosed it, the rest of the world might seem less empty.”

“He had her in his arms, her face like a wet flower at his lips, and all their vain terrors shriveling up like ghosts at sunrise.” 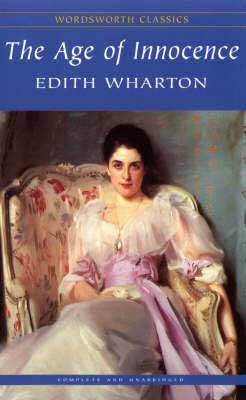 The Age of Innocence on Amazon*

“When we’ve been apart, and I’m looking forward to seeing you, every thought is burnt up in a great flame. But then you come; and you’re so much more than I remembered, and what I want of you is so much more than an hour or two every now and then, with wastes of thirsty waiting between, that I can sit perfectly still beside you, like this, with that other vision in my mind, just quietly trusting it to come true.”

“There was no use in trying to emancipate a wife who had not the dimmest notion that she was not free.”

“What’s the use? You gave me my first glimpse of a real life, and at the same moment you asked me to go on with a sham one. It’s beyond human enduring—that’s all.”

“Something he knew he had missed: the flower of life. But he thought of it now as a thing so unattainable and improbable that to have repined would have been like despairing because one had not drawn the first prize in a lottery.”

“During that time he had been living with his youthful memory of her; but she had doubtless had other and more tangible companionship. Perhaps too had kept her memory of him as something apart; but if she had, it must have been like a relic in a small dim chapel, where there was not time to pray every day … “

“Their long years together had shown him that it did not so much matter if marriage was a dull duty, as long as it kept the dignity of a duty: lapsing from that, it became a mere battle of ugly appetites. Looking about him, he honored his own past, and mourned for it. After all, there was good in the old ways.”