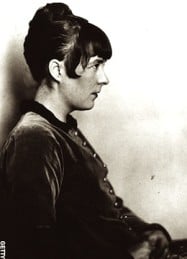 Katherine Mansfield (1888 – 1923) was a New Zealand-born  writer recognized for revolutionizing the modern English short story. Though she had many challenges in her short life, her grit and courage comes through in this selection of quotes by Katherine Mansfield.

In 1908, firmly ensconced in the bohemian life in London, she began writing short stories. Her first collection was published in 1911 and reflected a certain disillusionment with her native country. Titled In a German Pension, it received favorable reviews and was praised for “acute insight” and “unquenchable humour.”

She was diagnosed with tuberculosis in 1917 but continued to write on a daily basis until she could no longer do so by 1922.  Though she had many challenges in her short life, her grit and courage comes through in this selection of quotes by Katherine Mansfield.

“The mind I love must have wild places.”

“I have discovered that I cannot burn the candle at one end and write a book with the other.” (From her journal, June 10, 1919)

“Risk! Risk anything! Care no more for the opinion of others, for those voices. Do the hardest thing on earth for you. Act for yourself. Face the truth.” (From her journal, October 14, 1922) 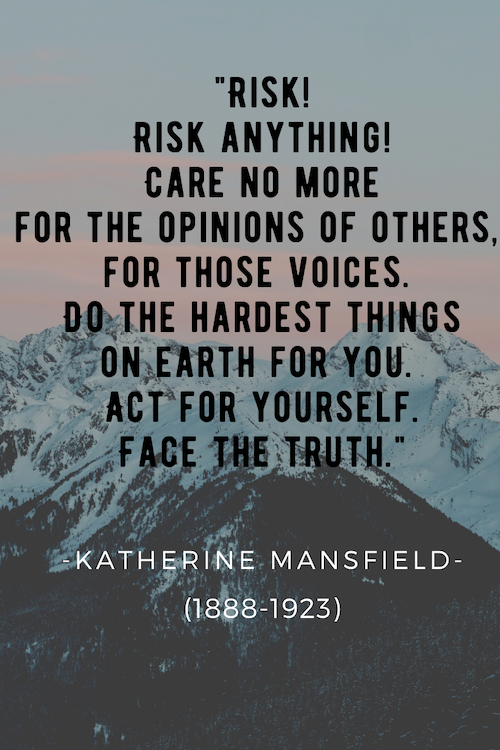 Would you like more?
Gutsy Quotes by Katherine Mansfield on Life’s Challenges

“I believe the greatest failing of all is to be frightened.” (From a letter to John Middleton Murry, October 18, 1920)

“To work — to work! It is such infinite delight to know that we still have the best things to do.” (From a letter to Bertrand Russell, December 7, 1916)

“The mind I love must have wild places, a tangled orchard where dark damsons drop in the heavy grass, an overgrown little wood, the chance of a snake or two, a pool that nobody’s fathomed the depth of, and paths threaded with flowers planted by the mind.” (Katherine Mansfield Notebooks: Complete Edition, 2002)

“What is it with me? Am I absolutely nobody, but merely inordinately vain? I do not know…. But I am most fearfully unhappy. That is all. I am so unhappy that I wish I was dead—yet I should be mad to die when I have not yet lived at all.”

“Could we change our attitude, we should not only see life differently, but life itself would come to be different. Life would undergo a change of appearance because we ourselves had undergone a change of attitude.”

“I have made it a rule of life never to regret and never to look back. Regret is an appalling waste of energy, and no one who intends to become a writer can afford to indulge in it. You can’t get it into shape; you can’t build on it; it’s only good for wallowing in.” (Bliss and Other Stories, 1920)

“The pleasure of all reading is doubled when one lives with another who shares the same books.” (From a letter to Ottoline Morrell, January 1922)

“When we can begin to take our failures seriously, it means we are ceasing to be afraid of them. It is of immense importance to learn to laugh at ourselves.” (from her journal, October 1922)

“What I feel for you can’t be conveyed in phrasal combinations; It either screams out loud or stays painfully silent but I promise — it beats words. It beats worlds.”

“The mind I love most must have wild places, a tangled orchard where dark damsons drop in the heavy grass, an overgrown little wood, the chance of a snake or two, a pool that nobody fathomed the depth of, and paths threaded with flowers planted by the mind.” (Katherine Mansfield Notebooks: Complete Edition)

“Ah, what happiness it is to be with people who are all happy, to press hands, press cheeks, smile into eyes.”

“I like to appear in any society – entirely at my ease – conscious of my own importance, which in my estimation is unlimited, affable and very receptive. I like to appear slightly condescending, very much of le grand monde.” 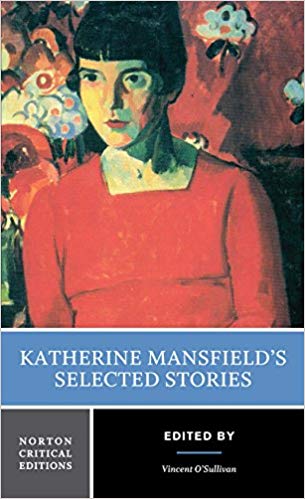 “… Every true admirer of the novels cherishes the happy thought that he alone – reading between the lines – has become the secret friend of their author.”

“I think of you often. Especially in the evenings, when I am on the balcony and it’s too dark to write or to do anything but wait for the stars. A time I love. One feels half disembodied, sitting like a shadow at the door of one’s being while the dark tide rises. Then comes the moon, marvellously serene, and small stars, very merry for some reason of their own. It is so easy to forget, in a worldly life, to attend to these miracles.” ( The Collected Letters of Katherine Mansfield: Volume 1: 1903-1917)

“I adore Life. What do all the fools matter and all the stupidity. They do matter but somehow for me they cannot touch the body of Life. Life is marvellous. I want to be deeply rooted in it – to live – to expand – to breathe in it – to rejoice – to share it. To give and to be asked for Love.”

“To acknowledge the presence of fear is to give birth to failure.” (Journal entry from “Reading Notes”, 1905-1907)

“What do you want most to do? That’s what I have to keep asking myself, in the face of difficulties.”

“Without passion, one writes in the air, or on the sands of the seashore.” 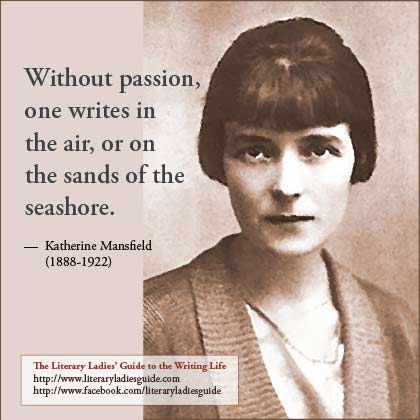