Her eloquent nonfiction works educated readers about how every entity interacts with the broader web of life.

This interconnectedness influenced her research into the indiscriminate use of chemical insecticides and the resulting book, Silent Spring (1962), her best known, raised questions and awareness that contributed to the formation of the Environmental Protection Agency.

Though Rachel Carson is regarded more as a scientist and environmentalist, there’s no question that her passion for literature fueled her graceful and impassioned writings.

Rachel Louise Carson’s mother, Maria, was the daughter of a Presbyterian minister, who received a classical education in an all-female seminary school. Her father, Robert, didn’t complete high school and worked at a series of unfulfilling jobs. The couple married when Maria was twenty-five and Robert was thirty years old.

Maria gave piano lessons to supplement Robert’s erratic employment earnings. Their first child, Marian, was born in 1897, followed by young Robert, in 1899, before Rachel came along eight years later, in 1907. The family lived on a small Pennsylvania farm in the town of Springdale, along the Allegheny River.

The Carson home had four rooms, a fireplace for heat, and no indoor plumbing, with 64 acres of fields and orchards and brush to explore, which fostered a curiosity and intensity in young Rachel. Her mother nurtured her creativity, with books and art supplies, games, and puzzles.

In 1913, at six years of age, Rachel attended Springdale Grammar School. Two years later, she wrote a story called “The Little Brown House” about a pair of wrens seeking shelter. In the fourth grade, she wrote another, “The Sleeping Rabbit.”

In 1918, the children’s magazine, St. Nicholas, published “A Battle in the Clouds by Rachel L. Carson (Age 10),” for which she received a Silver Badge. By the time she was twelve years old, she had had four stories published and earned ten dollars for her writing. 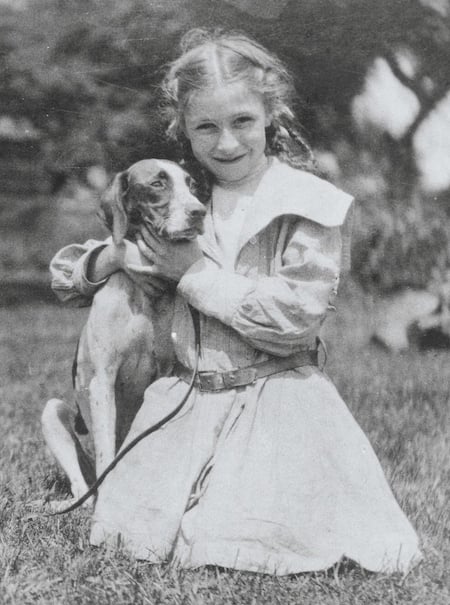 Photo of young Rachel Carson is from Yale Collection of American Literature,
Beinecke Rare Book and Manuscript Library, no date
. . . . . . . . . .

After completing the tenth grade in Springdale Grammar School, Rachel studied at Parnassus High School in Kensington, Pennsylvania, and graduated top of her class.

She received a scholarship at the Pennsylvania College for Women in Pittsburgh (now Chatham University) and began to study English in 1925, but switched to biology in her junior year, inspired by the teachings of Mary Scott Skinker, who emphasized the natural world’s interconnectivity.

As a doctoral candidate, she taught part-time to support her family, but dropped out after her father died in 1935 to work full-time. 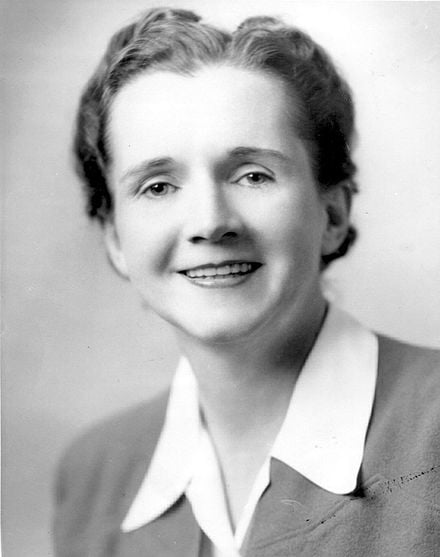 When Rachel began working at the Federal Bureau of Fisheries (now the Fish and Wildlife Service), in 1935, she was one of two women employed in non-secretarial positions. Her first assignment was to write the scripts for a 52-episode-long series called Romance under the Waters.

She continued to write radio scripts and pamphlets and eventually she climbed the ranks to aquatic geologist but she never had any scientific duties. The substantial promotion she received, at the age of 42, after a male colleague left the position vacant, did not result in an increase of status and pay comparable to his.

While employed at the Bureau, Rachel also contributed articles to the Baltimore Sun under the name R.L. Carson and she continued to pursue publication elsewhere. 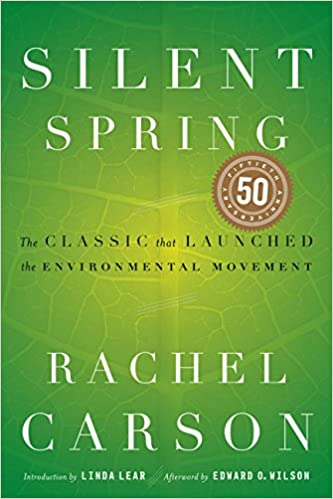 One eleven-page essay originally prepared for the Bureau, but deemed better-suited for another kind of audience, was ultimately published in The Atlantic in 1937 as Undersea. This was the basis for her first book and her favorite. Under the Sea Wind (1941) combines biology with aspects of paleontology and geology, and it presents the interactions of species and landscapes against a backdrop of human history.

After WWII, chemical companies sought peace-time uses for products designed as weapons. Rachel edited reports about scientific tests and prepared two alerts about the effects of dichlorodiphenyltrichloroethane (DDT) at work.

When she pitched an article on the subject to Reader’s Digest in 1945, they rejected it. In 1946, she began to work more concertedly towards conservation, traveling with Kay Howe or Shirley Briggs, who accompanied her in the field and illustrated her booklets.

In 1948, she completed the first chapter of The Sea Around Us. She met Marie Rodell for lunch at the fabled Algonquin Hotel, and became the fledgling agent’s first client. When the book was first published as a series of long articles for The New Yorker in June 1951, the first part alone was fifty-nine pages long.

By July of 1951, the book proper appeared on The New York Times’ bestseller list, where it stayed for 86 weeks. While there, it won the National Book Award, in January 1952.

The following summer, Rachel bought land in Maine on Southport Island, where Dorothy and Stan Freeman summered. The couple first visited with Rachel on July 12, 1953, which launched an intimate and enduring relationship between the women.

Their correspondence has been edited by Martha Freeman and published as Always, Rachel: The Letters of Rachel Carson and Dorothy Freeman, 1952-1964 The Story of a Remarkable Friendship (1995) and provides detailed and abundant insight to all aspects of Rachel’s work and life from that point.

In October 1955, The Edge of the Sea was published, also after having been serialized in The New Yorker, displaying both her creative and scientific prowess once again—another bestseller.

The following year, Rachel’s mother had a fall and, as she had been the primary caregiver for Rachel’s sister’s child, Rachel’s familial responsibilities increased with the need to care for her mother and six-year-old nephew. But her work was now crucial too.

In 1958, the annual production of pesticides had increased 700%, compared to pre-world-war levels; it was now big business, and people were beginning to recognize the link between their impact on human health in comparison to the effects of radioactive fallout observed after WWII.

The public’s growing awareness of the dangers of chemicals created a natural readership for Silent Spring, serialized in The New Yorker beginning June 16, 1962, and published as a book on September 27, 1962.

Silent Spring sold more than 100,000 copies in the first week and was on the bestseller list by Christmas. By now it has sold more than two million copies and has been translated into more than twenty languages. 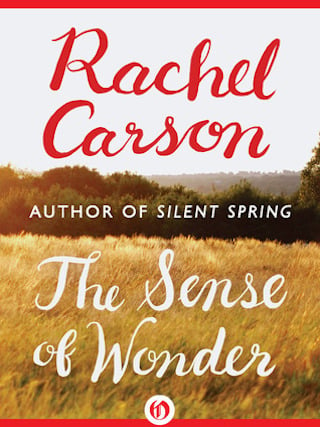 The legacy of Rachel Carson

Even while engaged with preparations for her second book, in 1950, Rachel had her first surgery, to remove a benign tumor from her left breast. Her second surgery in 1959, revealed that the tumor was malignant, but her doctor concealed the results (the paternalism of medical practices dictated that she was ill-prepared to accept the truth as a single woman, without a husband’s or father’s guidance).

She died on April 14, 1964, having concealed her illness, in part to avoid conjecture that her personal health was the primary motivation for her research into the health risks posed by chemical insecticides.

In the year before she died, she testified before a Washington subcommittee on pesticides, although she never advocated for a complete ban on the pesticides, only objected to their indiscriminate use.

The Sense of Wonder was published posthumously in 1965. This widely praised book meant to be enjoyed by children and their parents. It was expanded from an essay Rachel wrote in the 1950s. A typical review (Courier-News, Bridgewater, NJ) wrote of this book:

“It is a persuasive plea for adults and children to share the marvels of nature together. Now it has been turned into a picture book. Most of the photographs, in black and white and in color, are by Charles Pratt. Some of them are literal illustrations of subjects mentioned in the text; others are less literal, but still in the spirit of the message. Many were taken along the Maine seacoast where Miss Carson spent her summers.”

In 1970, the National Environmental Policy Act was passed, the Environmental Protection Agency was formed, and the first Earth Day was celebrated that April. In 1972, DDT was banned for agricultural use in the United States. 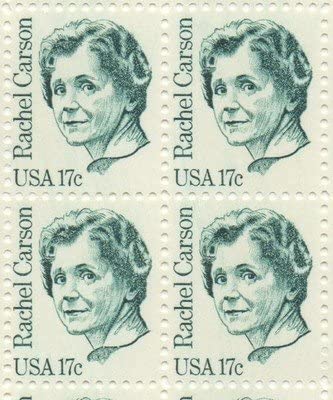 In 1980, Rachel was posthumously awarded the Presidential Medal of Freedom, and the following year, a postage stamp was issued in her honor. The house where she wrote Silent Spring—11701 Berwick Road, Colesville, Maryland—was designated a national landmark in 1991. A conservation area in Maine was renamed The Rachel Carson National Wildlife Refuge in 1969.

These are tangible impacts, but immeasurable is the impact of having a woman dare to triumph quality of life over profit. She defied cultural norms and questioned the supremacy of science when it was used to alter the Earth’s natural processes.

As a popular science writer, she identified and valued unity and interconnectivity. She promoted the principles of ecology before that term was in widespread usage and invited other ordinary people to consider their impact on ecosystems.

“We still talk in terms of conquest. We still haven’t become mature enough to think of ourselves as only a very tiny part of a vast and incredible universe. Now I truly believe that we in this generation must come to terms with nature. And I think we’re challenged as mankind has never been challenged before to prove our maturity and our mastery not of nature, but of ourselves.”