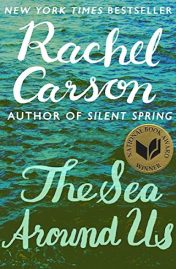 Rachel Carson’s legacy rests on her environmental classic, Silent Spring (1962), so it may be surprising to learn that a decade earlier, she had another smash bestseller. The Sea Around Us by Rachel Carson (1951) is a gracefully written, meticulously researched work of nonfiction making the case for the primacy of the oceans, a plea that has gone unheeded.

In 1948, she completed the first chapter of The Sea Around Us. Marie Rodell, a fledgling agent, took Carson on as her first client. Portions of the book were first published as a series of long articles for The New Yorker.

By July of 1951, the entire book had been published and made its appearance on The New York Times’ bestseller list, where it stayed for 86 weeks. It won the National Book Award, in January 1952. It was the second book in what became known as Carson’s “Sea Trilogy.”

Oxford University Press reissued the book in 2018, providing this description:

“Originally published in 1951, The Sea Around Us is one of the most influential books ever written about the natural world. Rachel Carson’s ability to combine scientific insight with poetic prose catapulted her book to the top of The New York Times best-seller list, where it remained for more than a year and a half.

Ultimately it sold well over a million copies, was translated into twenty-eight languages, inspired an Academy Award-winning documentary, and won both the National Book Award and the John Burroughs Medal.

The Sea Around Us remains as fresh today as when it first appeared over six decades ago. Carson’s genius for evoking the power and primacy of the world’s bodies of water, combining the cosmic and the intimate, remains almost unmatched: the newly formed Earth cooling beneath an endlessly overcast sky …

The seas sustain human life and imperil it. Today, with the oceans endangered by the dumping of medical waste and ecological disasters such as the Exxon oil spill in Alaska, the gradual death of the Great Barrier Reef, and the melting of the polar ice caps,

Carson’s book provides a timely reminder of both the fragility and the centrality of the ocean and the life that abounds within it. Anyone who loves the sea, or who is concerned about our natural environment, will want to read, or re-read, this classic work.” 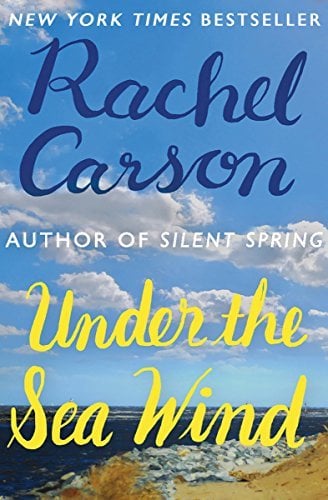 The reviews for so unusual a work of nonfiction, presenting scientific fact with gorgeous language, were nearly universally laudatory. Here’s one typical review:

A 1951 review of The Sea Around Us by Rachel Carson

From the original review by E.H. Martin in the Baltimore, MD, Evening Sun, June 30, 1951: Brilliant Study of The Sea

That anyone should attempt within the covers of a book of only 216 pages to do justice to such a vast subject as the oceans of the earth in all of their aspects is remarkable enough. Even more remarkable is the fact that in The Sea Around Us, Miss Rachel Carson’s effort to accomplish this feat has resulted in not only a superb example of scientific reporting but also a work of art.

From the gray beginnings when “the earth was without form, and void; and darkness was upon the face of the deep.” Miss Carson tells the cosmic story of the origins of the seas and the continents, and of the creation in the primeval waters of the first living cells.

This is a drama the span of which is measured in hundreds of millions of years. It is also a drama which comes alive under Miss Carson’s talent for compression and simplification without distortion of the facts.

Throughout this book the reader finds a prodigious amount of factual information, a solid body of scientific evidence, all handled with an almost casual ease.

When there is disagreement among experts, when alternative hypotheses must be balanced and weighed to explain matters in the absence of definite proof, Miss Carson says so. So compelling, however, is the whole, mighty evolutionary story as she tells it that one is disposed to accept her without question as guide to the chronicle of events which took place eons before man came upon the scene.

It is not, however, with how the oceans came to be that the author is primarily concerned. Rather the main body of the book deals with the seas and their mysteries as they now exist; with their teeming life, their effects on our climate and with those forces of the sea that are only just coming to be comprehended.

As Miss Carson notes, after we have subtracted the shallow areas of the continental shelves and the scattered banks and shoals where at least the pale ghost of sunlight moves over the underlying bottom, about half the earth remains covered by miles-deep, lightless water, that has been dark since the world began. 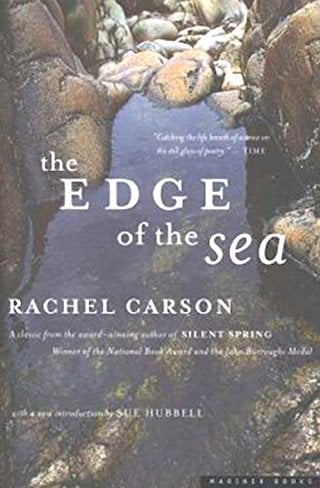 This is the area of mystery which has withheld its secrets longer than any other. The story of what the abyssal depths are beginning to yield in the way of information as to their nature and the life they contain is one of the most fascinating the author has to tell.

With a happy combination of poetic, economical prose and sober grasp of the facts. Miss Carson deals with such diverse topics as how waves are formed, their length of “fetch” and their awesome power; the fabulous variety of life in the seas; the influence of tides and the role of the sea in the making of weather.

This last topic. treated in detail in a chapter entitled “The Global Thermostat,” throws some fresh light on the climatological phenomenon of increasing warmth in the Arctic first noted by the Swedish glaciologist Hans Ahlmann.

Miss Carson, whose first published work appeared in The Sunday Sun, taught for a few years at the Johns Hopkins University and the University of Maryland. She now holds the position of editor-in-chief of the United States Fish and Wildlife Service.

On the basis of just one chapter of her book, which appeared in the Yale Review, she won the George Westinghouse Science Writing Award for 1950. It only needs to be added that The Sea Around Us as a whole is written as admirably and fascinatingly as was that particular excerpt. 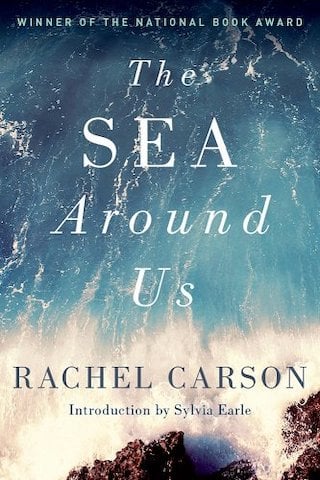 More about The Sea Around Us