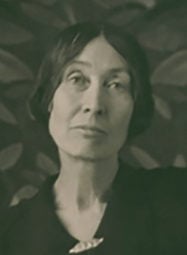 The New York Times declared her “one of America’s best poets” when she died, but her interest in radicalism, feminism, and experimental poetry wrote her out of literary history.

“An early, great chronicler of New York life,” wrote Robert Pinsky in a 2011 Slate column about Ridge. 2018 was the hundredth anniversary of her first and most important book, The Ghetto and Other Poems; the title poem celebrates the Jewish immigrants of the Lower East Side:

They are covering up the pushcarts…
Now all have gone save an old man with mirrors–
Little oval mirrors like tiny pools.
He shuffles up a darkened street
And the moon burnishes his mirrors till they shine like phosphorus…
The moon like a skull,
Staring out of eyeless sockets at the old men trundling home the pushcarts.

Read The Ghetto in full here.

Irish-born Ridge grew up in New Zealand, gave parties in the Village for William Carlos Williams, Marianne Moore, Jean Toomer, and Hart Crane, edited two of the most important modernist magazines, Broom and Others, and wrote ground-breaking poetry.

A year after the publication of The Ghetto and Other Poems, Ridge gave a speech in Chicago called “Woman and the Creative Will,” about how sexually constructed gender roles hinder female development – ten years before Virginia Woolf wrote A Room of One’s Own. 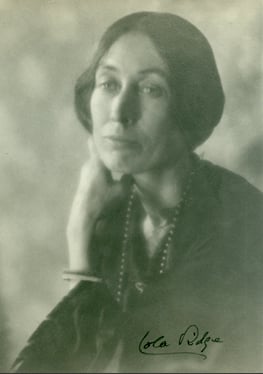 Ridge worked on an expanded version of her speech for years until Viking, her publisher, told her it wouldn’t sell. The title poem of her second book, Sun-up and Other Poems, is told in the voice of a bad girl who beats her doll, bites her nurse, wonders “if God has spoiled Jimmy” after he exposes himself, and intimates that her imaginary friend is her bisexual half.

A bigamist as well as an anarchist, Ridge left her son in an orphanage in L.A. soon after her arrival in the U.S., when she went to work for Emma Goldman and Margaret Sanger in New York. Ten years later, she protested Sacco and Vanzetti’s execution in Massachusetts, and faced down a rearing police horse.

Solo and broke in the next decade, she traveled to Baghdad and Mexico – and took a lover at sixty-one. Her five books of poetry contain poems about lynching, execution, race riots, and imprisonment. They also contained imagist poems of great power:

Pythoness body — arching
Over the night like an ecstasy —
I feel your coils tightening …
And the world’s lessening breath.

“Nice is the one adjective in the world that is laughable applied to any single thing I have ever written,” Ridge announced in 1932. The Rumpus wrote that she is “a model for poets today inspired by contemporary social movements addressing racial justice, economic inequality, and an array of sexual freedom issues.” 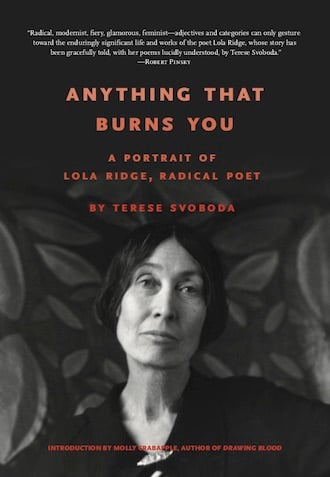 Contributed by Guggenheim-winner Terese Svoboda, the author of 18 books of poetry, fiction, memoir and translation. She has most recently published Anything That Burns You: A Portrait of Lola Ridge, Radical Poet (Schaffner Press, 2018).

Terese Svoboda’s biography of Lola Ridge, Anything That Burns You: A Portrait of Lola Ridge, Radical Poet is now available in paperback, with an introduction by radical artist/author Molly Crabapple.

“Terese Svoboda is one of those writers you would be tempted to read regardless of the setting or the period or the plot or even the genre.” — Bloomsbury Review

“No one who cares about American culture will want to miss this book.” –– Cary Nelson, editor of Anthology of Modern American Poetry.