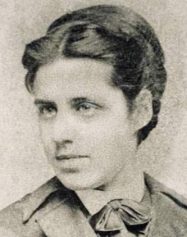 As touching and world-famous as this poem has remained, it’s but a tiny portion of her body of work. The life of Emma Lazarus, brief as it would be, was filled with accomplishment, not only as a writer, but as an advocate for Jewish immigrants and refugees.

Emma was part of a large Sephardic Jewish family, the fourth of seven children of a well-to-do merchant and sugar refiner, Moses Lazarus. Her mother’s maiden name was Esther Nathan.

Most of her ancestors were from Portugal, though they settled in New York well before the American Revolution. Along with some two dozen other Portuguese Jews, they arrived in New Amsterdam after fleeing the Inquisition from their settlement in Recife, Brazil.

A precocious poet and accomplished translator

When she began writing and translating poetry, Emma was still in her teens. Her father, with whom she enjoyed a close rapport, privately printed her first works in 1866. The following year, at age 18, her first collection, Poems and Translations, was published.

Her original poems were written when she was between 14 and 17 years old, and the volume also included translations of poems by Dumas, Hugo, and Schiller, among others. The book was praised by Ralph Waldo Emerson and other notable writers and thinkers. 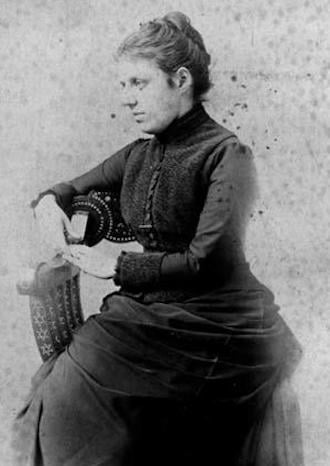 Jewish causes and the plight of refugees

George Eliot’s 1876 novel, Daniel Deronda, had a profound influence on Emma. The story of a young man’s discovery of his Jewish roots in 1870s England led Emma to think more deeply about her own Jewish identity.

She became outspoken about the plight of Russian Jews, who suffered violent pogroms following the assassination of Tsar Alexander II in 1881. She also became aware of the struggles of Jewish refugees who had fled from the Russian Pale of Settlement to New York, arriving destitute and desperate.

Emma delved into social activism, particularly in the realm of immigrants and refugees. She became involved with Russian Jewish immigrants detained at Castle Garden, and was deeply affected by their experiences. She began to argue for the cause of a Jewish homeland, even before the concept of Zionism began to emerge.

According to the Guide to the Emma Lazarus papers housed at the American Jewish Historical Society, she also produced:

… a series of fourteen essays printed in 1882 – 1883 in The American Hebrew entitled “Epistles to the Hebrews” was posthumously published in 1900 as a book by the Federation of American Zionists. The essays outlined her Zionist ideas and plans that entailed Jewish centers in both the United States and Palestine.

Emma was one of the founders of Hebrew Technical Institute in New York City. The organization provided vocational training to Jewish immigrants. She also established The Society for the Improvement and Colonization of East European Jews in 1883.

Following a journey to France and England, where she befriended poets Robert Browning and William Morris, Emma received the commission that would forever alter her legacy. She was invited to write a poem for the purpose of raising funds for a pedestal for the Statue of Liberty in 1883.

Though reluctant at first, she finally relented. “The New Colossus,” a sonnet, was first published New York World and The New York Times in 1883. But it wouldn’t be engraved on the Statue of Liberty until 1903, about sixteen years after she had died.

These are the most recited lines (actually the last lines) of the sonnet containing the “lines of world-wide welcome” inscribed at the base of the Statue of Liberty:

Give me your tired, your poor,
Your huddled masses yearning to breathe free,
The wretched refuse of your teeming shore.
Send these, the homeless, tempest-tost to me,
I lift my lamp beside the golden door! 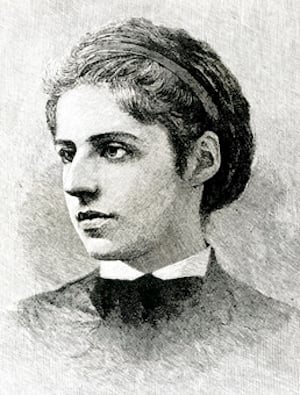 The legacy of Emma Lazarus

Emma began to suffer from illness, likely Hodgkin’s lymphoma, in 1884. In 1885, devastated by her father’s death, she traveled to Europe once again, visiting Italy, England, and France. But her condition worsened, and she returned to New York.

She died on November 17, 1887, at the age of 38, and is buried at Congregation Shearith Israel’s Beth Olom Cemetery, Cypress Hills, Queens, New York.

“The New Colossus” would become (and is still) so famous that it has overshadowed much of Emma’s considerable body of work and accomplishments.

Emma Lazarus was one of the first successful and vocal Jewish American authors, and her work was admired and praised by her contemporaries. Her advocacy on behalf of Jewish refugees and her case for the creation of a Jewish homeland were also part of what made her short life so impactful.

A touching remembrance of Emma Lazarus

Here is a portion of a remembrance of Emma Lazarus that appeared in The Century Magazine shortly after her death:

“We cannot restrain a feeling of suddenness and incompleteness and a natural pang of wonder and regret for a life so richly and so vitally endowed thus cut off in its prime. But for us, it is not fitting to question or repine, but rather to rejoice in the rare possession that we hold. What is any life, even the most rounded and complete, but a fragment and a hint?

What Emma Lazarus might have accomplished, had she been spared, it is idle and even ungrateful to speculate. What she did accomplish has real and peculiar significance. It is the privilege of a favored few that every fact and circumstance of their individuality shall add lustre and value to what they achieve.

To be born a Jewess was a distinction for Emma Lazarus, and she in turn conferred distinction upon her race. To be born a woman also lends a grace and a subtle magnetism to her influence.

Nowhere is there contradiction or incongruity. Her works bear the imprint of her character, and the character of her works; the same directness and honesty, the same limpid purity of tone, and the same atmosphere of things refined and beautiful.

The vulgar, the false, and the ignoble—she scarcely comprehended them, while on every side she was open and ready to take in and respond to whatever can adorn and enrich life. Literature was no mere “profession” for her, which shut out other possibilities; it was only a free, wide horizon and background for culture.

She was passionately devoted to music, which inspired some of her best poems; and during the last years of her life, in hours of intense physical suffering, she found relief and consolation in listening to the strains of Bach and Beethoven.

When she went abroad, painting was revealed to her, and she threw herself with the same ardor and enthusiasm into the study of the great masters; her last work (left unfinished) was a critical analysis of the genius and personality of Rembrandt.

And now at the end we ask: Has the grave really closed over all these gifts? Has that eager, passionate striving ceased, and ‘is the rest silence?’ Who knows? But would we break, if we could, that repose, that silence and mystery and peace everlasting?”