Anita Loos (April 26, 1889 – August 18, 1981) was an American author, playwright, and screenwriter, best known for Gentleman Prefer Blondes. She was born Corinne Anita Loos in what is today Mount Shasta, California.

The story of her actual childhood seemed like a scenario fit for screen treatment. A curious girl, she tagged along with her father, a dissolute alcoholic, whose company included others of his proclivity, prostitutes, and others who resided in San Francisco’s underbelly.

Anita performed on stage from an early age in her father’s stock theatre company, on occasion becoming the sole support of the family. She disliked the work, however, knowing that what she really wanted was to be a writer.

Breaking into writing for film and theater

Though she rejected the life of acting for herself, Anita was drawn to the world of film and theater. She began writing film scripts in 1912, and went on to create more than two hundred screenplays for D.W. Griffith, Douglas Fairbanks, and Constance Talmage. Between 1912 and 1915, she churned out more than 100 scripts, only a few of which weren’t filmed in that era of silent films. 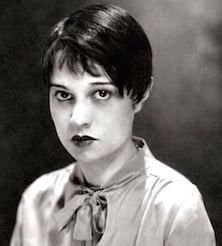 An imperfect marriage in exchange for freedom

To escape her stifling home life, Anita married Frank Pallma, Jr., in 1915. The marriage was unsatisfying and lasted only a short time. She had been working with director John Emerson on creating scripts for matinee idol Douglas Fairbanks, and in 1919, they married.

In her memoir, she recounted what a disappointment the marriage was:

“Instead of living happily ever after,” she recalled, “John and I set about wrecking each other’s lives. Our marriage was both tragic and comic, together with a thousand combinations of the two.” Though they continued to collaborate, she claimed that she did most of the work and he took most of the money.

Her husband was unfaithful and she was unhappy, but she stuck with him until his death in 1956 because, as she wrote, “My husband liberated me; granted me full freedom to choose my own companions.” 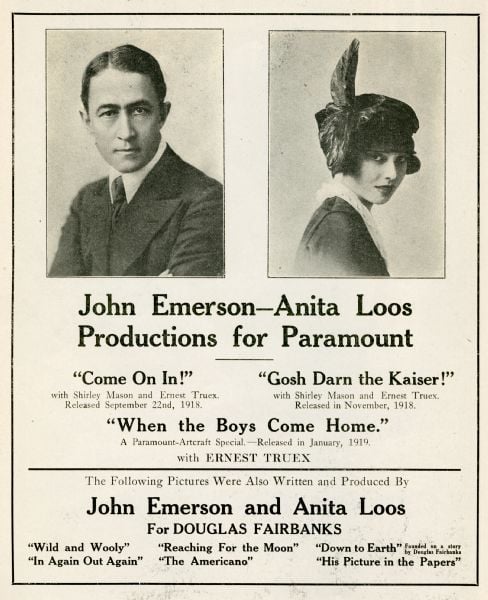 Making it big in Hollywood

Anita Loos was already quite successful as a scriptwriter, but her really big break came when Irving Thalberg of Metro-Goldwyn-Mayer hired her write a script for Red Headed Woman, which was a popular novel.

Several other prominent writers, including F. Scott Fitzgerald, had made a mess of the task. She succeeded, and the hit film that resulted launched the career of Jean Harlow. Anita continued to write for MGM throughout the 1930s and 1940s, producing many scripts for films that featured the era’s biggest stars.

Going back to the mid-1920s, Anita was on a train to New York City, and observed how the male passengers were falling all over a silly blonde. She used that as the jumping off point for a series of sketches about a gold-digging blonde flapper from Little Rock who came to be called Lorelei Lee. These were published in Harper’s Bazaar magazine as “The Lorelei stories.”

The satiric stories that subtly addressed issues of sex were such a hit that the magazine’s circulation quadrupled within a short time. The stories were collected into a book titled Gentleman Prefer Blondes, published in 1925, and which is arguably the most enduring work by Anita Loos. 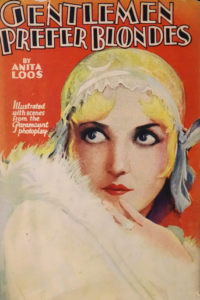 Gentleman Prefer Blondes was a smash success, translated into numerous languages. It became a Broadway play in 1926, and was revived on the Broadway stage as a musical in 1949. The musical made a star of Carol Channing and ran for more than 700 performances. The song “Diamonds are a Girl’s Best Friend” was a highlight of this musical version.

Perhaps most famous of all, Gentleman Prefer Blondes was made into a 1953 film starring Marilyn Monroe. A talking version of the film, released in 1953, starred Marilyn Monroe. 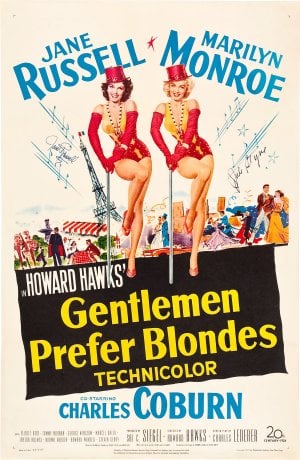 In the late 1940s, Anita was hired to adapt the novel Gigi by the French author Colette for the stage, something that several writers failed at before she stepped in. She and Colette became good friends.

Colette herself chose the actress to play the titled role — none other than Audrey Hepburn, for whom it was a Broadway premiere. The show opened in 1951. Later, Anita would write the film script for another Colette title, Cheri. 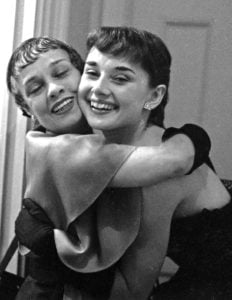 Though Anita was quite petite at 4 feet 11 inches and 90 pounds, she was an outsized personality. She had a darkly humorous view of life and loved working as much as  she loved having fun, but she had a quick wit and a brilliant mind.

Her skill and productivity were admired widely, and she was respected as well as liked by her peers. Her company was sought by celebrities at home and abroad, and she was also the object of affection of a number of men.

She seemed demure, but that was a facade for a bright tongue and a quick mind that gave her short shrift. This made her excellent company and served as an entree to the houses of celebrities here and abroad.

Anita knew everyone who was anyone, and was friends with the actor Clark Gable as well as the most successful writers of the era, including Sherwood Anderson, H.L. Mencken, and Aldous Huxley.

Anita Loos was quite the socialite as well, seeing and being seen in New York City as well as London, Her name was in the society columns with stunning regularity. Some called her one of the “original flappers,” while others said of her that she was a “literary handmaiden to an age.” She died of a heart attack August 18, 1981, in New York City, at the age of 92. 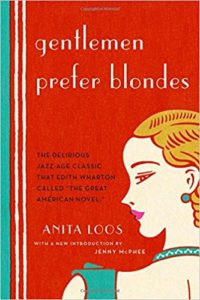 Film and stage credits
Anita Loos’ screenwriting credits are too numerous to list. Link to Wikipedia for a listing of her film credits and her stage credits. The 1953 film version of Gentleman Prefer Blondes is much altered from the original 1925 book, but was a bit hit nonetheless, as was the 1949 Broadway musical.