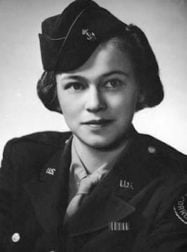 Born Georgette Louise Meyer, she was fascinated by air travel throughout her childhood in Milwaukee, Wisconsin. She renamed herself after the explorer Admiral Richard “Dickey” Bird.

Even as a child, Georgie Lou, as she was called, marched to her own drum. She was short and nearsighted, and always quirky and precocious. From a young age, she dreamed of flying planes. She was patriotic — always saluting the flag on her way to school. “I believed I could do anything I wanted to do, and I still believe it.”

Her father gave her a taste for adventure and encouraged her to reach for her dreams. Her mother wanted her to be an English major, and perhaps become a writer. She had other ideas, though; she wanted to become an engineer. Her mom did her best to discourage her from her interest in planes.

Dickey was precocious. She skipped a grade and by age sixteen, graduated high school. The class valedictorian entered the Massachusetts Institute of Technology (MIT) to study aeronautical design on a full scholarship. Alas, the classroom bored her and she flunked out after two years, itching for more hands-on experience, and some adventure in the skies.

Going to work at a local air field, Dickey photographed planes and wrote articles about them. However, when her mother learned that she’d been having an affair with a pilot, she sent her to live with her grandparents in Coral Gables, Florida. This did nothing to dampen her interest in planes nor in having adventures.

She took flying lessons and logged hours in her pilot’s book. wrote releases for a local airshow, which landed her an assignment in Havana, Cuba. She submitted a story on an air show disaster that took place in Cuba to The New York Times, which in turn caught the eye of Transcontinental and Western Air (TWA). She moved to New York City to work in this airline’s publicity bureau. 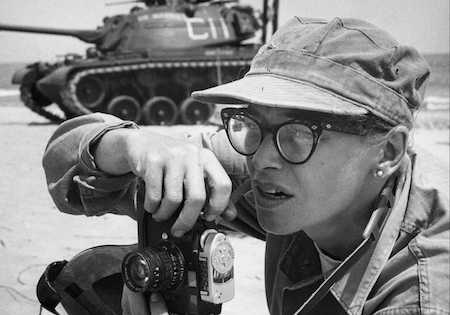 An introduction to photography

It was in New York City that Dickey met Tony Chapelle, a former naval photographer, while taking his classes in photography. “The picture is your reason for being,” is a lesson she learned from him. Twenty years older than she and much more worldly, she married him in 1940. No doubt he helped launch her professional career, and the two seemed a good match, at least at first.

She sold her first portfolio of photos to Look magazine the following year. One thing Tony neglected to tell her was that he was still married to his first wife; he was known as something of a con artist. Yet for all of that, Dickey stayed with him for fifteen years before their marriage was annulled.

When Dickey started freelancing after studying with Tony, she worked for a number of women’s magazines, but her photos were rather mediocre. She wasn’t and would never become a technician, but what she lacked in technical skills she made up with an eye for the dramatic and she was a master at composition.

Dickey Chapelle’s first big break was a story she sold to the New York Times detailing how American pilots were enlisting in in the Canadian Air Force to fight against Hitler.

Dickey was then hired by National Geographic as a war correspondent and photojournalist during World War II. She covered U.S. Marines on training missions as well as the battles of Iwo Jima and Okinawa. Women rarely covered combat, so this was an unusual achievement.

The only other prominent female photojournalist was Margaret Bourke-White, who worked for Life magazine. Dickey was willing to go into harm’s way, especially in service of the troops. During the war, one editor she worked for fired her because her photos were too graphic. 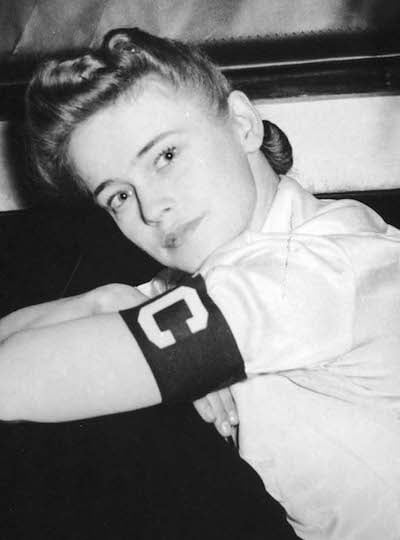 A commitment to covering global conflicts

After World War II, Dickey continued to cover major wars and conflicts around the globe. Bold and fearless, she would do whatever it took to get close to the action to get close to battle zones.

Dickey was petite and became known for her unique style: At work on the battlefield, she wore pearl earrings, Harlequin glasses, and an Australian bush hat with her combat fatigues. It was her way of showing she wasn’t just “one of the boys” but that she still deserved her place in a man’s world. Yet she never asked for any favoritism or concession for her gender.

She said, “The main thing you have to remember about covering combat is that you have to survive to get the picture and the story out to the world.” She was described as feisty, tough as nails, and hard-bitten. She never wanted her gender to get in the way but also felt she had to prove herself. She told the stories she wanted to tell, on her own terms. Concerned with the troops, she also wanted to give voice to civilians caught in the crossfire.

Arrested as a spy

Dickey’s fearlessness got her into a number of scrapes. While covering the Hungarian Revolution in 1956, she also agreed to transport penicillin to Hungarian refugees. She was caught and arrested as a spy by Russian forces (the Red Army).

On the way to her interrogation, she wrapped her small camera in a glove and tossed it out the window. She was told she would be hanged. Still, she spent nearly two months in a Hungarian prison, as a prisoner of the Russians, 38 days of which were in solitary confinement.

Dickey wrote that the purpose of her work was to document “the wreckage resulting from man’s inhumanity to man.” She wanted to share personal stories of those in combat with the rest of the world. She wasn’t pro-war but was definitely pro-military.

In the course of her career, Dickey the Algerian rebels, Fidel Castro’s Cuban revolution, Post-war Korea, Laos, and more. At age forty, she received permission to parachute jump with troops, the first female to do so, and she jumped six times. 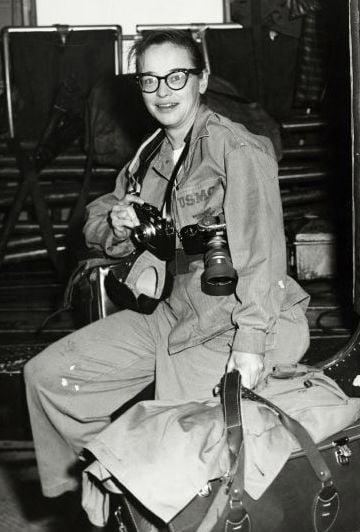 Vietnam, and death in the field

She spent a lot of time traveling back and forth from Vietnam in the 1960s to cover the war and took the first photograph of an American soldier engaged in combat.

In 1965, Dickey was with the U.S. Marines near Chu Lai Air Base. She was walking behind a lieutenant who accidentally tripped a landmine and she was hit in the neck by a piece of shrapnel, severing an artery. She died from her wound, at age forty-seven. A statement by the marines: “She was one of us, and we will miss her.” She was buried with full military honors, something quite unusual tribute for a civilian journalist.

The legacy of Dickey Chappelle

Always bold and fearless, Dickey Chapelle documented global conflicts from World War II through Vietnam. In her thirty-year career as a war photojournalist, she earned great respect in a profession that had been unfriendly, if not completely closed, to women who came before her. That respect came from both the military and from the press, and she received many prestigious awards.

She presciently said: “When I die, I want it to be on patrol with the United States Marines.” And she did, of course. She died, as it’s said, with her boots on.

The United States Marines honor her memory with the annual Dickey Chapelle Award, which is given to recognize women who have contributed “to the morale, welfare, and well-being of the corps.”

Dickey received the George Polk Memorial Award, the Overseas Press Club’s highest honor, in 1961. Her citation read that she could “hold her own with men twice her size when it comes to covering a war.”

Her autobiography, What’s a Woman Doing Here? A Combat Reporter’s Report on Herself, describes her trial by fire in her quest to become a war correspondent.

Dickey Chapelle was the first American female reporter to be killed in action and the female war correspondent to be killed in Vietnam. Her greatest words of wisdom were:

“War is not a woman’s place. There’s no question about it. There’s only one other species on earth for whom the war zone is no place, and that’s men. But as long as men continue to fight wars, I think observers of both sexes will be sent to see what happens.”