The Only Bookstore in the County: The Book End, Blackstone, Virginia 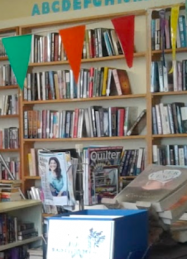 This musing on The Book End, a used book shop in Blackstone Virginia, highlights the importance of a local bookstore, even a modest one, to a town’s cultural life. Contributed by Tyler Scott:

Two years ago my husband and I realized we needed a change. We had grown tired of city life after raising our children in Richmond, Virginia, our hometown, so one Sunday we drove southside to go antiquing in Blackstone, where my mother-in-law spent part of her childhood.

We met a distant cousin for the first time, and explained we were looking for a small place to move not too far away from family and friends; she took us around to look at real estate, and a week later we put a contract on a Queen Anne Revival built in 1896. By fall, we had put our house on the market and rented a residence while we renovated the Victorian. I also had to explain to several people we were not getting a divorce.

Granville and I moved from a city with a metro area population of 1,105,000 to a town of 3,400 plus a National Guard base. The change took some getting used to, yet we acclimated quickly. Our adventure had begun.

At a certain time of day, under a smoke-blue sky, if you drive down Blackstone’s Main Street, it looks like the 1950s – other than the traffic. The welcoming stark white spire of St. Luke’s Episcopal Church; the monotonous brick façade of the Wedgewood Motor Inn; and turn-of-the-century homes, some showplaces, some mummified and depressing.

This is a town where most people drive pickup trucks and we all wave to each other, strangers included. A contractor told me Blackstone was so small they would all know what I was going to do before I did, and he was right. I learned it may only take fifteen minutes to do my errands whereas I needed an extra half hour so I could talk to everyone I met. This is just what we do. 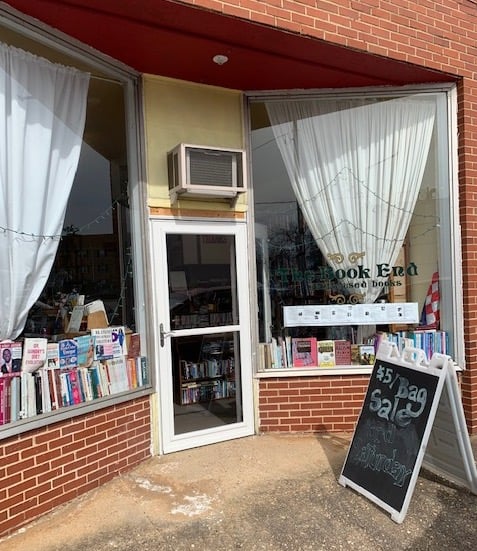 One of the best parts about Blackstone is our bookstore, The Book End (gently used books), on Maple Street, next door to the Sanitary Barber Shop and down the way from our newspaper the Courier Record. My husband and I frequent the store more than Amazon or the library and I am sure he is one of their best customers since he buys at least eight books a month.

The prices haven’t changed since they opened in 2007; unless you buy a first edition online, the in-store prices range from 25 cents to 4 dollars. The store, 15 by 15 feet, is so small that I must move the coffeepot if I want to look at the biographies.

Pat Conroy called a bookstore “a wonderland” and a “portal to the world” and I agree with him one hundred percent. One of my favorite pastimes is to browse. The moment I walk through the front door, I can feel life’s stress lift from my shoulders.

Where books there is fellowship so I can study the shelves to my heart’s content and talk to anyone nearby. I rarely go with a list of hope-to-finds and all those inexpensive books make me feel heady; stories of love and triumph, heartbreak and devastation, the glories of victory and the results of despair, not to mention just good old-fashioned storytelling at its best. This is a trip to a foreign land and you never know what you will stumble upon. 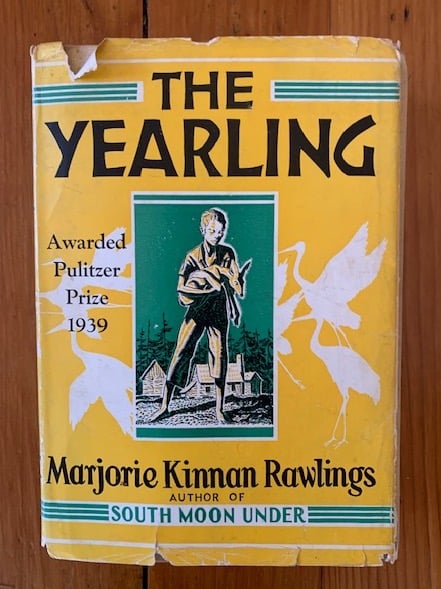 The last time I visited The Book End, I bought To Begin Again, one of M.F.K. Fisher’s early memoirs; Blue Nights by Joan Didion (which I will return because I can’t bring myself to read about the tragedy of losing a daughter); and a 1939 copy of The Yearling by Marjorie Kinnan Rawlings with illustrations— Thoreauian-toned prints by Edward Shenton. The inside cover of the Rawlings is inscribed as follows: “To Courtney – on her 11th Birthday- written over 60 years ago and enjoyed by millions of young people just like you— With love, Grandma”

And what have the volunteers (who are paid a book each day they work) found in donated books? “Bookmarks, letters, airline tickets, and bills,” remembers volunteer Arrol Lund, Secretary of the Friends, and reported to know the inventory thoroughly. Granville had the biggest find of all: a one hundred dollar bill that was being used as a bookmark. He promptly donated this to the library.

How it all began

Volunteers opened the bookstore to serve the Louis Spencer Epes Memorial Library and encourage school-aged children to read. At the time, the library needed to expand and wanted to sell books they no longer needed; they had no money or space, so a group of volunteers organized Friends of the Library and decided to open a used bookstore.

A benevolent businessman, Bobby Daniels, offered the building for free and the ladies had a contest where people submitted names like The Bookshelf, The Book Depot, Unwinders Books, The Dusty Page, and the Book End. Hence, a paradise was born for readers. 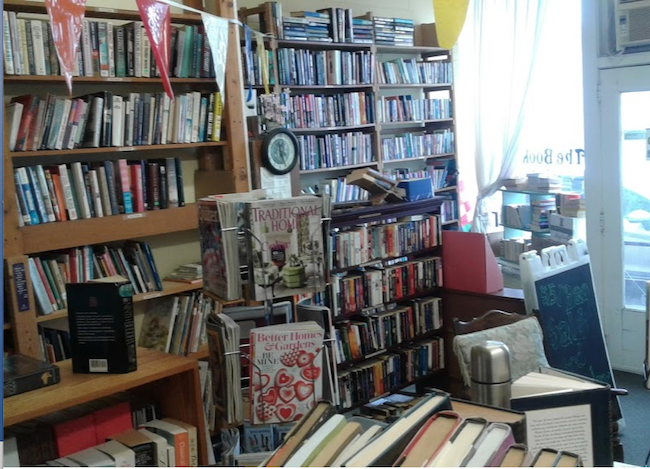 According to the Friends of the Library pamphlet, the mission is to generate community support; volunteer at the library when needed; operate and maintain The Book End; conduct book sales and special events like discussions and storytellers; buy necessary equipment and books the library may need; cultivate donors; and host special events and book giveaways.

Projects have been extensive – $10,000 was given to the library a few years ago for carpet and computers and last year the Friends split the cost of online services like hoopla and OverDrive with Crewe, a neighboring town. Every year the Friends host several children’s book giveaways including Halloween and the Grand Illumination event at Christmas.

Customers like the once-a-month Purple Bag Sale: a bag of books for $5.  Moreover, on a sweet note, every third grader in Blackstone has received an inscribed dictionary from The Friends of the Library. (If I had been one of those students, I would still have my dictionary.)

The Book End can count on customers like my husband. His study is a sea of murder mysteries with titles like Bad Business, The Skull Beneath the Skin, and Wicked Prey. (For a mild-mannered man he certainly does have violent tastes in reading.) I asked him once what made The Book End unique and he says it’s local and easy to drop in on: “I can go through the entire store in ten minutes and the stock turns over quickly.”

Granville considers this a way of giving back, calling it “penny philanthropy. I can buy a book for a dollar,” he explains as he puts down the Robert Parker mystery he is reading, and “the dollar goes over to the library and then I will take it back and they can sell it for another dollar. Every time I go, I donate twice.”

The Book End sells mostly westerns, science fiction, and romance. The hours are generous, though if you call and leave a message, they’ll open just for you. They put their best books on the website Alibris, where they list nearly one thousand books; the rest of the inventory, about 4,500 books, comes from not only donations but also library purges.

Any non-profit reflects the dedication of its volunteers and The Book End is run by a core of women of a certain hallowed age. According to Lauren Watkins, Treasurer of the Friends and a neighbor, “running The Book End would be impossible without them.”

Tilly Conley is a longtime volunteer and current Vice President of the Friends who helps with pricing and does most of the computer work. A former English, theater arts, and photojournalism high school teacher, she is loquacious on the phone and interviews herself for the most part. “I like to read so much I’ll read the back of a cereal box,” she chuckles. Books have been a part of her life growing up in Blackstone (she lives in her childhood home) and she reminisces about the town librarian Mrs. Franny Jones who would take a book away from you if she thought you were too young for it.

What does the future hold for The Book End? The building has been sold to Molly Black, owner of the Sanitary Barbershop, and the good news is the store will remain as tenants and the rent will not be increased from $200 a month.

The Friends are still discussing financial details with Blackstone and Nottoway County and they plan on holding more fundraisers. The shop is also looking for volunteers because many of them have cut back on responsibilities like manning booths, baking to raise money, and carrying hundreds of heavy books. Or sadly, they have died.

The day draws to a close and Main Street is starting to quiet down. The horizon has a lilac tint – spring is on the way – and I see a few people walking towards the Farmer’s Café for an early supper. I turn left on Maple Street and park in front of The Book End to gaze at the books beckoning from the windows. Who would have thought such a modest place could have an impact on so many? In life, I have learned, sometimes it is the small endeavors that are inspirational.

Please support your local used bookstores and consider a donation to The Book End. Make checks payable to Friends of the Library, Blackstone. Mail to The Book End, 102 Maple Street, Blackstone, Virginia 23824.

Contributed by Tyler Scott. Tyler lives in Blackstone, Virginia with her husband and Norfolk Terrier.  Her essays and articles have appeared in numerous magazines and newspapers. She’s the author of The Excellent Advice of a Few Famous Painters.

4 Responses to “The Only Bookstore in the County: The Book End, Blackstone, Virginia”